Ear infections are very painful and are one of the most common complaints to primary care physicians. In children, ear infections are usually caused by bacterial or upper respiratory infections. Ear infections in adults are often secondary to other medical problems, such as sinus infections or dental disease. Understanding what ear infections are, how they are treated and ways to prevent them is important in preserving hearing. 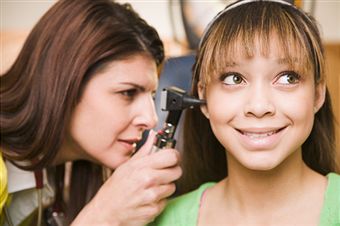 Otitis externa (OE) is an infection of the ear canal. This type of infection can be caused by bacteria or fungal organisms. Otitis externa is commonly known as swimmer’s ear, as it frequently occurs in the summer months as a result of swimming.

Labyrinthitis is an infection of the inner ear that is commonly known as Meniere’s disease. There is an increase of fluid and pressure in the labyrinth in this type of ear infection.

Pain is the most common symptom of ear infections and is normally present in patients with both acute otitis media and otitis externa. Patients with ear infections also commonly have other respiratory symptoms, such as a cold, nasal congestions or sinus infection.

The most common symptoms of otitis externa are pain, especially when the ear is touched or moved, and itching. The ear canal will be red and swollen, at times to the extent that it swells completely together. Otitis externa can cause drainage and often causes a foul odor in the ear.

People who have labyrinitis or an inner ear infection will have dizziness, ringing in the ear and hearing loss. This type of ear infection can also cause nausea and vomiting and make the person unable to carry out activities of daily living.

The causes of ear infections vary with each type. Acute otitis media is caused by bacterial or upper respiratory infections. In children, the eustachian tube is short and curvy, which allows fluid to back up into the ear drum. The warm, moist environment of the ear canal is the perfect place for bacteria to grow and multiple.

Otitis externa is caused by either bacterial or fungal infections. Swimming, especially swimming underwater or in rivers, lakes or streams, allows the bacteria or fungus to enter the ear canal. Trauma from cleaning the ear canal with objects like cotton swabs or hair pins also can lead to otitis externa.

The cause of labyrinthitis is unknown, although it is known to occur after a viral or bacterial infection. Colds, upper respiratory infections, influenza and acute otitis media have also been known to proceed labyrinthitis.

Children who are put to sleep with a bottle are also at an increased risk of ear infections. The liquid from the bottle or cup often rolls into the ear canal when a child is lying down. Children who stay in a group day care environment are also more likely to develop ear infections. This is due to the increased exposure to upper respiratory infections that spread easily from child to child. 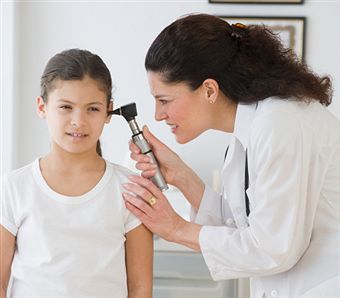 There are two major risk factors for otitis externa. Swimming is the top risk factor for this type of ear infection.

Swimming in rivers, lakes, oceans and streams carries an increased risk because multiple organisms live in this type of water.

Swimming pools are still a risk factor for otitis externa, but the number of organisms in the water is reduced by chemical treatments. Children who lay in the bath tub are also at an increased risk of developing otitis externa.

The second major risk factor for developing otitis externa is cleaning inside the ear canal with a foreign object. Many people routinely clean their ears with cotton swabs or other objects like hair pins. Not only can cleaning the ears this way scratch the ear canal and make it susceptible to infections, it can also burst the ear drum.

The only known risk factor for labyrinthitis is a recent viral or bacterial infection.

There are many strategies to prevent ear infections. To prevent acute otitis media, avoid the modifiable risk factors of smoking, putting a child to bed with a bottle or cup and group day care. Keeping your child current on vaccinations can also reduce the incidence of this type of ear infection.

One should also avoid cleaning the ear canal with any foreign object. Generally, the ears are self-cleaning and do not require cleaning beyond wiping the visible areas with a damp wash cloth. Over the counter ear wax removal products can be used to help remove excessive wax. As a general rule, nothing smaller than the end of the pinkie finger should be inserted into the ear canal.

The most common way to diagnose acute otitis media is by a physician looking into the ear with an otoscope. With this type of infection, the ear drum will be red and dull. At times, the ear drum will appear bulging as the pressure of the fluid increases. If the ear drum has busted, the physician will see yellow or bloody drainage from the ear. This drainage can be cultured to identify the exact organism causing the ear infection. In fact, in some instances the physician will open an ear drum that has not ruptured by cutting a small hole into it to culture the fluid.

The pressure or fluid in the ear drum can be measured by a non-invasive test called a tympanogram. Sound waves are administerd into the ear to calculate the movement of the ear drum. This is not a definitive test to diagnose ear infections, but can aid the physician in determining the effects of the increased fluid and pressure on the ear drum.

Otitis externa is normally diagnosed by the presence of swelling in the ear canal and drainage. The drainage can be cultured to determine the infecting organism. Pain upon touching or moving the ear is also a diagnostic tool for otitis externa.

Labyrinthitis is normally diagnosed based upon its symptoms. A MRI will normally be ordered to rule out other conditions that mimic the symptoms of this type of ear infection.

There are two surgical procedures that can be used with this type of infection. Tympanocenteis, or opening the ear drum with a small incision, can help relieve the pain and pressure of otitis media and also allows the physician to obtain a sample of the fluid for a culture. Ventilation tubes can be placed in the ear drum to relieve pressure and allow fluid to drain off of the ear drum. Ventilation tubes are normally used after recurrent ear infections in children.

There are home remedies that will not cure the infection, but can help with the related symptoms of pain and increased pressure. Applying heat to the ear can help reduce pain. Placing a warm wash cloth or heating pad on the ear generally provides pain relief. Tylenol or Ibuprofen (if the child is over 6 months of age) can also help reduce the fever and pain associated with acute otitis media. Placing a few drops of warmed mixture of pure almond carrier oil, lavender essential oil, chamomile essential oil and tea tree essential oil into the ear can also help relieve pain. Finally, chewing gum can help open the eustachian tubes, reducing the amount of fluid and pressure in the ear.

Many people feel that acute otitis media will get better without treatment. This is generally not recommended as untreated ear infections can cause serious, life-threatening complications.

The treatment for otitis externa is normally limited to antibiotics and keeping the ear dry. The ear drainage may be cultured to determine the most effective antibiotic to use. Swimming is normally restricted until the ear infection completely resolves.

Labyrinthitis will normally get better without treatment. An antibiotic may be prescribed if the cause is thought to be bacterial in nature. Medications can also be given to help the accompanying symptoms of nausea and vomiting.

Otitis externa can cause a temporary hearing loss if the canal is extremely swollen. If untreated, this type of ear infection can also spread to the mastoid bone, located behind the ear.

The most common complication of labryinthitis is a disruption in the daily life of the patient. Severe dizziness, nausea and vomiting cause many people with this disease to stay in bed. They are unable to work or meet other responsibilities.