Garlic, today’s super food, has enjoyed a long and colorful history grounded in myth and folklore. Ancient Egyptians use of garlic has been found etched into walls of temples, and written on papyrus, as well as clay sculptures of the herb dating back to 3200 B.C. Although the Egyptians believed strongly in it’s healing powers , they considered garlic, sometimes referred to as “The Stinking Rose”, too pungent too eat. However, they so revered garlic for its mystical healing powers that they often tried to take it with them to the after life.

Dried garlic was found in King Tutankhamen’s tomb along with other treasured herbs and spices. Indeed, Garlic did not become popular in America until the 19th century, when immigrants flooded in from other countries. However, it is the very powerful smell of Garlic that inspired the myth and superstitions that have surrounded it for centuries. 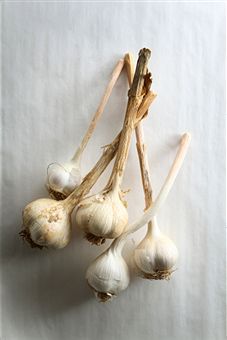 Throughout the ages, and in all parts of the world, Garlic has been revered for it’s healing abilities, and used as a talisman against evil spirits. Everyone is familiar with the old legend of garlic as a vampire repellent, but the folklore concerning this versatile herb does not stop there. You may be surprised to to find what other Old Wives tales there are referring to garlic.

The folklore surrounding garlic is endless, as are the types of ailments it is said to cure, both proven and UN proven. The uses of garlic not only span thousands of years, but they also span thousands of miles around the world. From Ancient Arab herbalists who said that garlic gives strength, and beatifies the complexion, to Louis Pasteur, who documented that one millimeter of garlic juice is equivalent to 60 milligrams of Penicillin in 1885, to recent studies that have shown garlic as a remedy for hypertension, the uses of its “super food” are endless.

While some people still find this herb pungent and repulsive, hence the name “The stinking Rose”, you may be surprised to hear some of the other names that garlic is referred to around the world.

Other Names For Garlic

So, what it is about garlic that has made it such a subject of myth and fantasy? It is the compound Allicin, contained in garlic, which gives it such a strong smell, and provides this herb with all of its healing qualities. It contains enzymes, flavenoids, calcium, copper, iron, manganese, phosphorus, potassium and selenium.

It is the selenium that really gives this herb it’s punch as this antioxidant alone has the power to boost the other vitamins containing Garlic, which include Vitamin A (Thiamin). Vitamin B2( Riboflavin), along with Vitamin and B6. With all of these essential vitamins and minerals packed into one small clove of garlic, it is no wonder that the benefits of this herb are known far and wide around the world.

So what has been proven to be true about the healing properties of garlic and what belongs restricted to the ream of myth and folklore? While many people will continue to believe in Grandma’s garlic and onion soup for a cold, or the old wives tale of stringing a clove of Garlic around you neck to ward off a cold, studies have actually been done to prove whether garlic is efficient as a medicine in this area, and exactly how much you should take.

The Truth About Garlic

With the benefits of garlic so far and widespread throughout the body, it is no wonder that the sale of garlic supplements is one of the top 5 in America. Many questions remain, however, as to what dosage of garlic is required to benefit from this herbs healing effects. Also, as much as this herb has crossed cultural lines in Cuisine for Italian to meditterean to Chinese, many people benefit from the herb my simply using it as a spice in cooking. The question remains, however, is taking supplements the same as eating cooked garlic? And to take it a step further, is eating cooked garlic as beneficial as eating it raw? Many health excerpts have confirmed that eating raw garlic is more beneficial to eating cooked garlic or supplements. 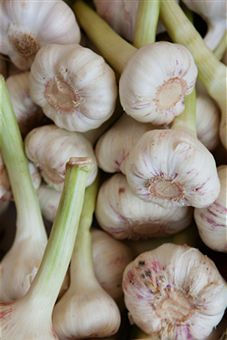 The crushing and chewing of garlic release the compound Allicin, which gives garlic its healing properties. However, many people are unable to eat garlic raw at first because when not used it, consuming large amounts of raw garlic can be very irritating to the stomach.

It is suggested to start off slow, and chew one clove of garlic a day. For people who cannot stomach the taste of garlic raw or cooked, there is the option so supplements, some of which include the compound Allicin.

A ratio of powdered supplement to raw garlic equates to an average dose of 1500mg of powdered garlic to ½ clove of fresh garlic.

In order to fight infection 3-4 chopped, crushed, or chewed cloves should be consumed per day, or in supplement form 600-900miligarams a day 2-3 times a day. Read labels of specific supplement for more precise dosing.

Another aspect of the benefits of garlic is its helpfulness to the home gardener. Garlic oil has been shown to repel slugs and snails when a barrier of it is put up around favorite plants and vegetables. Also garlic’s benefit as a companion plant has been utilized for hundreds of years as well. It is a well-known fact that planted in between roses; garlic will provide you with beautiful healthy roses for years to come.

Companion planting comes from the notion that if the proper plants and herbs are grown together, natural pest control will occur. Garlic, when planted alongside cabbage and lettuce repels and kills Aphids, Spider mites, and white flies, all dangerous pests to your plants. Growing garlic is not difficult, and is actually a good way to get kids involved in gardening.

How To Grow and Harvest Garlic

As you can see, garlic is one versatile herb! Straight from the garden to tour belly, this herb will benefit you for years to come. Whether eaten raw, cooked, or taken in supplement form garlic is rated high on the list of foods to eat for longetivity and well being. The possibilities are endless as to what you can do with this herb. Whether using it for hypertension or as a slug repellant in the garden, the uses of garlic still abound. Remember, however, that as good as garlic is for the body to always check with your physician before starting to take large amounts of garlic, especially if you take medication for blood thinners on a regular basis.