Gastritis refers to a group of different conditions that have a single thing in common, and that is the lining of the stomach being inflamed. The inflammation that gastritis causes is usually due to an infection that is responsible to the majority of stomach ulcers. However, there are several other factors that can contribute to the development of gastritis, such as traumatic injury, regularly taking in some pain relievers or drinking much more alcohol than necessary. 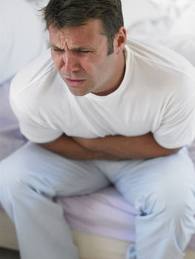 Gastritis may be a sudden occurrence (acute gastritis) or it can be a problem that happens over time (chronic gastritis). In some instances, this condition may lead to ulcers and have an increased risk towards developing stomach cancer. However, for most people, it is not a serious condition and it gets better with treatment.

Symptoms of gastritis may include:

Indigestion, which is a burning or a gnawing ache or pain in the upper abdomen, which can become either better or worse with eating;

Sometimes, gastritis may cause the stomach to bleed, though it is rare for this to be severe. Keep in mind that any bleeding in the stomach that results in vomiting blood or stools to be black and tarry will require immediate medical assistance.

Almost everybody has dealt with some form of indigestion and stomach irritation. Most instances of such are short lived and do not need any kind of medical attention. However, if the symptoms are present and consistent for over a week, a doctor should be called. A doctor should also be told if there are any stomach problems after taking any kind of over the counter or prescription drugs, especially if they are pain relievers such as aspiring.

See the doctor immediately if there is blood in the vomit or in the stools.

Many factors may contribute to the development of gastritis, such as:

Bacterial infection. People who are infected with Helicobacter pylori, or H. pylori, may suffer gastritis, and most likely, it is chronic. It is believed that half of the people in the world are infected with H. pylori and that it is passed from person to person. However, most people who are infected do not suffer any complications. Some people may experience H. pylori breaking down to protective lining of the stomach, which can causes changes to it. However, it is not known why some people do not experience problems with H. pylori while some others do. Doctors feel it may be due to lifestyle choices or inherited vulnerability.

Regularly using pain relievers. NSAIDS, or nonsteroisal anti-inflammatory drugs, including ibuprofen (Advil, Motrin, others), aspirin and naproxen (Aleve), might cause both kinds of gastritis. By using these drugs on a regular basis or by taking too many of them, it is possible to lose a key substance within the body that is supposed to preserve the protective lining within the stomach. Occasional usage of these substances should not result in stomach issues.

Excessive alcohol use. Alcohol is known to erode the lining of the stomach, making the stomach much more vulnerable to digestive juices.

Body cells attacking stomach cells. Autoimmune gastritis is a rare instance in which a person’s own body cells are responsible for the condition, attacking the cells within the stomach lining. This causes the immune system to pick away at the protective barrier. This is more common with those who have other autoimmune disease, such as type 1 diabetes, Hashimoto’s disease or Addison’s disease. This may also be connected with vitamin B-12 deficiency.

Other conditions. Other medical conditions may be to blame for the gastritis, such as Crohn’s disease, HIV, AIDS, parasitic infections, liver failure, connective tissue disorders or kidney failure.

Some factors which may increase the risk of developing gastritis include:

When left untreated, gastritis may lead to stomach bleeding and stomach ulcers. There is also the risk of stomach cancer in some forms of chronic gastritis, especially when the lining of the stomach is extensively thinned and there are changes to cells thereof.

The doctor will likely be able to diagnose gastritis after discussing medical history and undergoing an examination, though there may still be some tests performed to figure out the true cause. Some tests include:

Blood tests. The doctor may require that a blood test be ordered in order to determine whether or not there are any antibodies for H. pylori present. If the test comes back positive, it only confirms that, at some point in life, H. pylori has visited the body, but it does not necessary mean that the person is currently infected. The blood tests may also check for instances of anemia, which can be caused by stomach bleeding, which is caused by gastritis.

Breath test. This is a test that can easily tell if someone is infected with H. pylori.

Stool tests. Checking a sample of stool will allow a doctor to check for H. pylori. A positive test usually suggests a person is currently infected and usually prompts a doctor to check the stool for blood, which is a sign of stomach bleeding.

Upper gastrointestinal X-ray. This will require taking X-rays of the stomach and of the small intestine so that the doctor can monitor them for signs of gastritis and any other digestive problems which may be present. This is usually taken only after having swallowed barium, which is a liquid that is supposed to coat the lining present in the digestive tract, which allows the tract to appear more clearly when taking an X-ray.

Treating gastritis depends on what is causing it to develop. If a person is experiencing acute gastritis due to alcohol or pain relievers, the treatment would be to cease usage of the substances. When the gastritis is chronic and due to H. pylori, the treatment would involve eradicating traces of the bacteria. Most of the treatment plans also include having to take medicine which is meant to treat stomach acid, so that healing within the stomach may also be promoted.

Medicines That Can Treat Stomach Acid

Stomach acid further irritates the already irritated and inflamed tissue within the stomach, which causes it to be even more inflamed and results in pain. This is why it is recommended to neutralize stomach acid, including:

Antacids. Maalox and Mylanta are two examples of over the counter antacids, which can come in tablet or liquid form, which can be a common kind of treatment for a mild case of gastritis. These are useful in neutralizing the acid within the stomach and can usually provide pain relief quickly.

Acid blockers. When the antacids are not helping on their own, another medication may be recommended by the doctor, such as ranitidine (Zantac, cimedtidine (Tagamet), famotidine (Pepcid) or nizatidine (Axid), so that the stomach does not produce as much acid as usual.

Shutting down acid pumps. There are some medications that are called proton pump inhibitiors, which aim to reduce acid by blocking off the little pumps that are located in the cells of the stomach where the acid secretes. These kinds of medications include rabeprazole (Aciphex), lansoprazole (Prevacid), esomeprazole (Nexium) and omeprazole (Prilosec).

Medicines That Can Treat H. Pylori

There are several different regimens that serve to treat infections of H. pylori. Most doctors will simply use a combination of a couple of antibiotics in addition to using a proton pump inhibitor. On some occasions, bismuth, more commonly known as Pepto-Bismol, might be included in the mixture. The antibiotics serve to destroy the bacteria and the proton pump inhibitor is present to relieve nausea and pain, increase the effectiveness of the given antibiotics and to heal the present inflammation.

There are many reasons that digestive problems can develop for many different reasons, which include several lifestyle choices that can be controlled. It is recommended to:

Eat well. Not only is what is consumed important, but it is important to eat it well. Only eat a moderate amount at once, eat at normal times and try to relax while eating.

Maintain a healthy weight. Digestive problems are likely to occur in any weight class, but it is more common in those who are overweight, as are bloating, heartburn and constipation.

Make sure to get plenty of exercise. Aerobic exercise can stimulate the intestinal muscles, as can increased breathing and heart rate. This will allow the food to pass through more quickly. Try to perform at least half an hour of aerobic activity as often throughout the week as possible.

Even though it is not always possible to prevent being infected with H. pylori, there are a few ways to reduce the risk of developing gastritis:

Eat smart. Those who experience indigestion frequently should attempt having more frequent, but smaller meals that can ease stomach acid effects. For that matter, it is wise to avoid the foods that are most irritating, include those that are acidic, spicy, fatty or fried. Though this step lowers the risk, it will not always prevent the occurrence.

Limit alcohol or avoid it completely. Excessively drinking alcohol has a tendency to erode the lining or mucous in the stomach, which results in bleeding and inflammation.

Do not smoke. Like alcohol, smoking has a habit of interfering with the lining present in the stomach, which makes the stomach not only more susceptible to developing gastritis, but also for developing ulcers. Additionally, smoking increases stomach acid, which delays stomach healing and it is one of the leading risk factors with regards to stomach cancer.

Use different pain relievers. Whenever possible do not take aspirin, naproxen or ibuprofen. If pain relievers are needed, stick with the ones that have acetaminophen.