Ginkgo biloba is native to eastern China. It was eventually brought to Japan and from there moved to the western world. Ginkgo trees can sometimes live for as long as 2,000 years and can reach heights of over 100 feet. They are extremely hardy; in fact, there are several ginkgo trees in Hiroshima, Japan that survived the atomic bomb. The trees are sometimes called fossil trees, maidenhair trees, or kew trees. The ginkgo tree is the national tree of China.

The trees have medium sized fan-shaped leaves that can be made into a medicinal ginkgo extract. In autumn, the leaves turn bright yellow and fall to the ground. Ginkgo trees also produce cherry-sized seeds that drop to the ground during autumn, thereby starting a new generation of trees. These edible seeds were a typical food in ancient China. Although ginkgo trees are native to Asia, they can grow in nearly every sparsely populated area that has good irrigation and drainage.

Ginkgo biloba has been used medicinally for almost 3,000 years. In the ancient world, its leaves were used to aid blood circulation and to treat skin problems such as sores and freckles. The seeds, which were used medicinally as well as for culinary purposes, were thought to cure indigestion, bladder problems, and even cancer. Ginkgo was also traditionally used to treat lung problems such as asthma and chronic bronchitis.

For the most part, only ginkgo leaves are now used for medical purposes. It is very rare, in the western world, that the seeds are used either medicinally or as a food product. Ginkgo is still considered a good treatment for poor circulation. However, it does not appear to provide any relief from skin problems and it has not yet been proven to fight cancer.

Two of the main components of ginkgo leaves are flavonoids and terpenoids. Flavonoids, which are plant based antioxidants, help protect blood vessels and the central nervous system. Terpenoids dilate blood vessels and help keep blood platelets from sticking together.

Although ginkgo is now mostly used by adults, it does not generally harm children above the age of two. It has been found particularly useful for adults with cognition and/or concentration problems such as attention deficit disorder. Since its discovery 3,000 years ago, ginkgo biloba has never been out of use. In the 20th and 21st centuries, ginkgo has been used to treat the following problems:

Ginkgo biloba is one of the most common natural remedies used for treating the symptoms of ADD. Ginkgo brings more oxygen to the brain and aids concentration, thereby helping the person calm down and focus on one activity at a time. It has been proven particularly helpful for adults with the disorder.

Because ginkgo has been proven to help aid concentration and enhance cognitive abilities, it was long thought that it could help alleviate, if not reverse, the effects of Alzheimer’s disease and other forms of dementia. However, it has recently been proven that, although ginkgo does not harm people with these illnesses, it does not, by any means, offer relief. Although ginkgo aids concentration, it does not keep the long term memory from deteriorating.

At times, ginkgo is prescribed for tinnitus. It has been proven mildly effective because it can help the damaged blood vessels of the ear. However, the success rate is not very high. Tinnitus is not, by any means, considered the number one malady that ginkgo biloba treats.

If taken properly, ginkgo can slow down eye deterioration. It particularly helps the part of the retina that is affected by macular degeneration. Also, ginkgo, taken in large doses, can help improve the vision of those with glaucoma.

Ginkgo can act as an antidepressant. It has also been proven to help calm the mood swings of those with anxiety disorders. However, in order for ginkgo to effectively treat anxiety disorders, it should be combined with another natural remedy, particularly ginger or GABA complex.

Ginkgo can strengthen the arteries that supply blood to the penis, thereby helping an erection to take place.

Ginkgo can be helpful for women with unpleasant symptoms from PMS or menopause. It can calm mood swings and will also help control the muscles of the uterus.

Ginkgo can be an effective natural remedy for asthma. Its ability to dilate blood vessels can greatly reduce airway constriction. However, particularly when treating children with asthma, ginkgo should only be administered under the guidance of a medical professional.

Ginkgo is most often taken in tablet form. The extract from the leaves is combined with silica and other inactive ingredients and made into tablets of different milligram strengths.

Ginkgo in capsule form is rarely combined with other ingredients. This can be useful if a larger dose is desired. Also, ginkgo leaf extract is available in a bulk powder form that can be used for making homemade capsules.

Ginkgo biloba leaf extract is also available in an oral liquid form. Ginkgo purchased in this form is usually already divided into proper dosages. Also, ginkgo is available in a traditional tincture form. These two options can be useful for those who have difficulty taking tablets and capsules.

Ginkgo leaves can also be made into tea. Pre-made teabags usually include green tea. Also, bulk ginkgo leaves can be purchased and used in tea balls and homemade teabags. However, ginkgo in tea form does not provide are very large dose. If ginkgo is being used to treat a serious malady, it is highly recommended that it is taken in a form other than tea.

In general, ginkgo biloba has very few side effects. If an overdose occurs, the person could experience heart palpitations or faintness. However, these symptoms will only be temporary and will cease once consumption is brought under control. 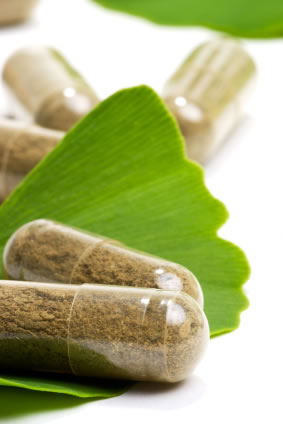 Normal use of ginkgo can cause mild intestinal problems such as vomiting or diarrhea; however, these symptoms will not generally occur unless ginkgo is taken on an empty stomach.

Caution should be used because ginkgo biloba is a blood thinner. It can interfere with anticoagulants and antidepressants. Pregnant and nursing women should, of course, consult a medical professional before use.

Although ginkgo seeds are edible, caution should be used: long term consumption can lead to poisoning, particularly in children.

When using ginkgo to enhance concentration or to treat other minor problems, it is generally recommended to take 60-200 mg per day. However, larger doses can be taken when treating a more serious problem. Ginkgo is usually taken 2-3 times a day, generally with a meal.

Ginkgo biloba is one hundred percent legal in all fifty states and is available without a prescription. So far, the only country it is illegal in is Ireland.

Ginkgo biloba is one of the most commonly used natural remedies in North America and Europe. Therefore, it is available in nearly every health and wellness store as well as online.

Ginkgo tablets and capsules are the easiest to find. They are usually available in 30, 60, and 120 mg strengths. The higher the milligram dosage, the more expensive the tablets or capsules will be. In general, tablets are cheaper than capsules. 120 60-mg tablets usually cost around $8, whereas 120 60-mg capsules usually cost $18. Puritan’s Pride.com, which sells ginkgo in tablet, capsule, and liquid form, typically has special deals, such as “buy 1 get 2 free”, that can be very economical.

Ginkgo tinctures are usually about the same price as any other natural remedy in tincture form. A one ounce bottle of ginkgo biloba tincture can cost anywhere from $6-$12. One ounce of the non-alcoholic tincture usually costs $10 or more.

It is generally very difficult to find liquid and tincture forms of ginkgo in traditional heath stores. However, it is available through most online suppliers.

Pre-made ginkgo teabags can be purchased online as well as at nearly every health store. However, they are generally not very reasonably priced: 20 teabags usually cost about $22. If ginkgo is desired in tea form, it is much more cost effective to buy bulk leaves and use them in tea balls.

Ginkgo leaves can be purchased, at a reasonable price, through most online bulk herb suppliers. HerbalCom.com, for example, sells ginkgo leaves at about $5 a pound. The same site also offers ginkgo powder at about the same price. It is very rare that reasonably priced bulk ginkgo leaves and powder can be found at traditional health stores.

Ginkgo seeds are still sold, although mostly for the purpose of growing trees. The seeds, which can be purchased from nearly every seed supplier, usually cost about $4 for a package of 10. Although the seeds can be eaten, caution should be used to avoid the aforesaid possibility of poisoning. Also, the seed have not been proven to have any medicinal value.