Hyperacidity occurs when the stomach releases a higher than normal amount of hydrochloric acid during the process of digestion. Hyperacidity also refers to the stomach simply containing an excess of acid.

The term heartburn refers to a sensation that can be described as feeling like burning and is felt in the chest area behind the breastbone. Though the pain will usually be felt in the chest, it may also radiate out towards the neck and throat area.

Heartburn may be experienced when there is a regurgitation of stomach acid (gastric acid). It also commonly occurs as a symptom of gastroesophageal reflux disease. The term acid reflux is often used interchangeably with heartburn. However, acid reflux is the action of the stomach acid leaking into the esophagus while heartburn is the associated sensation.

While most individuals experience infrequent and minor cases of heartburn, there is a severe condition known as GERD (gastroesophageal reflux disease) that affects some with symptoms far more often. This condition involves intense and frequent acid reflux and can lead to many potential health complications.

Hyperacidity is alternatively referred to as acid dyspepsia or Amalpitta.

Heartburn is alternatively referred to as acid indigestion or pyrosis.

Hyperacidity and Heartburn? Get Remedies Fast!

The most common symptoms associated with hyperacidity and reflux are:

In the more severe cases of GERD, symptoms may include:

*Please contact your doctor should you experience symptoms of GERD or experience heartburn more than twice per week.

Hyperacidity occurs as a result of several different causes. The most common of these are ulcers in the lining of the stomach, GERD, cancer of the stomach, or a diet that is high in spicy foods.

Acid reflux, and the resulting heartburn, is typically caused by a condition of the lower esophageal sphincter (LES.) This sphincter is found in-between the esophagus and the stomach. The role of the LES is to prevent acid that is present in the stomach (due to normal digestive processes) from leaking into the esophagus.

The LES will regularly open during eating so that food can pass into the stomach area for digestion or to allow for belching as needed. When the LES becomes underactive or fails to provide the necessary seal due to poorly timed opening or improper closing, reflux can occur. Problems with the LES can occur due to overeating, which leads to an overfull stomach with too much food. Being overweight or pregnant also puts pressure on the stomach and can lead to the same problems.

Additionally, the LES can become relaxed, causing it to malfunction, as a result of diet or lifestyle.

Risk factors for acid reflux and heartburn are sometimes not a direct result of lifestyle and behavior, such as in the case of a medical condition. However, most of the time these risk factors can be controlled by making changes to ones habits or diet.

Some behaviors that are known to trigger occurrences of reflux and heartburn include:

Some of the foods and beverages that are known to increase the risks of having heartburn are:

Having occasional heartburn is not usually a cause for concern. 30% of the U.S. population will experience infrequent moderate episodes that do not require medical attention. Frequent heartburn occurring more than twice a week for an extended period may indicate a serious medical condition or can develop into one.

Heartburn occurs daily for approximately 10% of the U.S. population. A doctor should be contacted if heartburn occurs over twice a week for a continuous two weeks or longer.

1) Keep an eye on portion sizes. Eating until stuffed puts pressure on the stomach. A very large meal will stc6ay in the stomach fc6or longer and increc6ase the chances of reflux. Reduce the size of meal portions so that you are feeling satisfied after eating rather than full.

2) Take the time to eat slowly. Slowing down can keep you from overeating.

3) Don’t eat meals and snacks within two hours of going to sleep. Eating several hours before bedtime will allow your stomach to digest properly and empty prior to lying down. This will also give time for the acid produced during digestion to decrease again.

4) Know which foods trigger heartburn and avoid them. A food diary can help to track the foods that will cause heartburn. Staying away from these foods can reduce the occurrences of heartburn. Each person is different and some food items can be triggers for some people and not others.

5) Be careful when eating out. Stay away from foods with high fat content, a low fat option is always better. Also, restaurant portion sizes are typically very large. Decide in advance to take half the meal home to avoid overeating.

6) Lose weight. Symptoms of heartburn can be reduced by shedding some pounds, which reduces some of the pressure on the stomach.

7) Avoid tight fitting clothes. Clothing that is too tight around the stomach area may put pressure on the stomach and the LES (lower esophageal sphincter.)

8.) Quit smoking. Smoke can cause or worsen the symptoms of heartburn.

10) Do not exercise within two hours of eating a meal. A full stomach combined with the movement and strain of exercise can lead to acid reflux and heartburn.

11) Increase your water consumption. Keep the body hydrated and avoid carbonated and caffeinated beverages to assist the body with digestion.

Frequently occurring heartburn could indicate a medical problem and a doctor should be contacted. Doctors may run diagnostic tests to determine the nature of the heartburn or to see if it is a reflection of a more serious concern.

Upper Endoscopy Procedure where a thin and flexible tube called an endoscope is inserted into the throat. Doctor can then examine the upper lining of the gastrointestinal tract (includes the esophagus, stomach and part of the small intestine.)

This procedure can provide more accurate results than x-rays because it gets a much closer view of the lining. From an endoscopy, a doctor can diagnose inflammation in the gastrointestinal tract, ulcers, hernias, growths, obstructions, precancerous conditions or cancer.

Bernstein Test (or an acid perfusion test) Procedure where the doctor will attempt to reproduce symptoms related to heartburn in order to determine if acid from the stomach is the cause of the heart burn. A nasogastric (NG) tube will be inserted into the esophagus through the nose.

PH Test Procedure performed to measure the amount of the stomach acid present or backed up into the esophagus. A thin plastic tube will be inserted into the esophagus through the nose and is left in place for 24 hours. Regular activities should be continued for the day in order to get the most accurate acid measurements.

Barium X-Rays (or barium swallow) X-rays taken after ingestion of a liquid containing barium. The doctor can see the flow of the barium into the digestive tract to spot ulcers, hernias, or other abnormalities.

There are many courses of action one may take to relieve the symptoms of hyperacidity and heartburn. Beyond simple prevent, there are home remedies, medicines, and surgeries that can help affected individuals.

Living enzymes in food are said to help with digestion and can help with or eliminate acid reflux. A diet high in organic, fresh, and raw fruits and vegetables will add living enzymes to the stomach and can lead to improvement of heartburn symptoms. 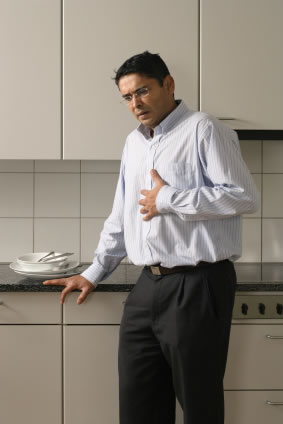 Some other remedies that may offer natural heartburn relief:

Stress and anxiety are known to aggravate acid reflux and heartburn symptoms. Finding methods to deal with normal anxiety and stress naturally can help to lessen symptoms. Some examples of natural ways to reduce anxiety and stress include aromatherapy, massage, meditative relaxing techniques or gentle exercise.

For many individuals with lesser to moderate symptoms of heartburn, a combined strategy of avoiding triggers and using over-the-counter medicines can be an effective means for controlling heartburn and acid reflux.

There are many over-the-counter medicines on the market that can neutralize stomach acid or otherwise reduce heartburn. Some of these include:

These medicines are easily accessible and affordable. However, there can be risks and side effects associated with long term use of these medications. Diarrhea, stomach cramping, headaches, nausea and constipation may occur with frequent use. Individuals taking antacids should ensure they are being taken according to instructions provided by their doctor or listed on the packaging.

When over-the-counter medicines are not providing relief, a doctor may prescribe medication for more severe cases. Those who experience very frequent occurrences of heartburn, experience hyperacidity, or individuals with gastroesophageal reflux disease (GERD) will benefit the most from the prescription medications that are taken once daily and work for 24 hours.

Proton pump inhibitors (such as Prilosec, Nexium, Protonix, and Prevacid) will reduce the amount of acid produced more effectively and for a more extended period of time than H2 blockers and also work to repair damage to the esophagus.

Prokinetics or Promotility agents (such as Reglan) can force the stomach to empty itself quicker, thus assisting the pressure on the LES and reducing acid reflux. They will stimulate stomach muscles to move food further along the gastrointestinal tract.

Side effects and risks associated with these types of prescription medications vary. Effects that should be reported to a doctor when taking proton pump inhibitors include confusion, tightness in the chest, fever, irregular heart beat and fatigue. High doses of prokinetics or promotility agents may reduce the absorption of other important medications and can cause effects such as drowsiness, diarrhea, restlessness, movement problems and issues with kidney functions in older adults.

For some individuals, medications may not provide enough relief of symptoms. For these cases or where the symptoms seem to negatively interfere with ones life, individuals may undergo surgery that may assist in offering relief of GERD and heartburn symptoms. Doctors may also recommend surgery when the LES fails to work properly or when esophageal cancer has developed from chronic GERD. If not properly treated, long term cases of reflux can cause serious issues or complications.

Laparoscopic Surgery- A procedure which is minimally invasive and utilizes a thin instrument attached to a tiny video camera and light source. The video transmits images to a monitor and this helps to avoid the need for larger incisions. This procedure will create an artificial valve in the stomach. The top portions of the stomach will be wrapped around the LES through an incision in the abdomen or chest area using a lighted tube. The new valve can strengthen the LES and prevent future episodes of acid reflux.

Individuals who meet certain criteria would be considered the candidates most likely to benefit from this surgery.

The benefits to this surgery include a short hospital stay and fast recovery/return to normal activities. There is less risk of infections and surgical complications due to the small incision that is used. This type of surgery is typically less expensive than more traditional and invasive surgeries. Surgery as treatment for GERD and heartburn symptoms would be considered a last resort.

Over 90% of those who undergo this surgery will be cured of their symptoms but there is no long term evidence to conclusively state that this cure will be permanent. Surgery as a method of treatment for reflux is debated in the medical world and many still believe medications are better long term solutions.