Hysteria, also known as hysterical neurosis, is a psychological state that is caused by extreme emotions such as overwhelming fear or sorrow. The psychological strain will become so severe that the individual will begin showing physical symptoms. The person will be extremely emotional and will often feel pain associated with supposed problems.

Unfortunately, hysteria became a blanket diagnosis for all women who showed abnormal behavior whether it was simple hormonal problems and sexual dysfunctions or serious mental disorders. Until the early 20th century, hysteria was often referred to as female hysteria. Since the advent of modern medicine and psychiatry, diagnoses of hysteria are not as wide spread. Although it has been established that the disorder is not caused by the female uterus, hysteria is still diagnosed more in women than in men.

Mass hysteria occurs when a group of people experience paralyzing fear that stems from the same cause. For example, mass hysteria could occur during a school shooting or a civil disturbance. It is very much thought that mass hysteria was part of the Salem Witch Trials.

Although hysteria is divided into several disorders, it is now most commonly referred to as somatization disorder.

Those suffering from hysteria are completely consumed by fear and anxiety. The person is absolutely certain that his or her body is suffering from disease or injury. The person will be so afraid of the supposed problem that he or she will often dissolve into “hysterics” that cannot be controlled by the person or by others. The person is so certain of the problem that he or she will actually feel associated pain. A person suffering with hysteria will often not be able to function socially. 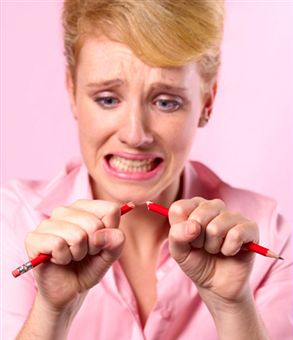 Other symptoms of hysteria include hyperventilation, fainting spells, elevated heart rates, depression, convulsions, and sensory impairment. Symptoms can last anywhere from a few weeks to a lifetime depending on the cause and type of hysteria.

Hysteria is not a physical disease that can be treated and ultimately cured. It is a serious psychological disorder. As with many mental problems, a person can be born with it. It can also be brought on by emotional or traumatic experiences such as witnessing a crime or the unexpected death of a loved one. Hysteria can also develop in children who have lived in an extremely abusive environment.

Unfortunately, hysteria can also be a side effect of chemical drugs. Long term use of the anti-anxiety drug Valium, for example, has been proven to cause the symptoms of hysteria.

Those suffering from hysteria will often do harm to themselves and to others. Because depression is a common symptom, thoughts of suicide can occur.

Even if a person is able to function socially, the symptoms of hysteria can be detrimental to interpersonal relationships. Hysteria sufferers often have difficulty making friends or forming and maintaining intimate relationships.

Conversion disorder occurs when a person encounters a personal difficulty that he or she feels unable to cope with by ordinary means. The person therefore “converts” the psychological dilemma into physical symptoms. A person suffering from conversion disorder will often have unexplainable physical problems such as tremors, paralysis, or even loss of sight, speech or hearing. For example, if a person sees his or her house burn down, he or she may, for a time, be unable to talk. The symptoms of conversion disorder are often alleviated by therapy.

Conversion disorder used to be known as hysterical blindness.

Histrionic personality disorder is diagnosed in people, particularly women, who show behavior patterns marked by overly emotional or dramatic thoughts and actions. The person will often embellish stories, be extremely egotistical, will seek approval and be hurt when it is not given, and will often dress and behave in sexually inappropriate ways. Although the person is able to interact socially, he or she will often be unable to maintain relationships.

Pain disorder occurs when a person suffers from chronic, unexplainable pain, usually after having endured a psychologically stressful event such as the unexpected death of a loved one. The pain can last anywhere from a few weeks to several years. Pain disorder is not the same as fibromyalgia, although many of the symptoms of these two disorders are identical.

Natural remedies are some the most economical and effective ways to treat the symptoms of hysteria. However, no matter how simple a treatment may sound, it should only be administered under the guidance of a qualified professional.

Alternative medicine is always a viable option, simply from the standpoint that these treatments rarely cause
any adverse effects.

Because hysteria disorders stem from psychological problems, therapies can be very effective treatment options. If properly conducted, therapies can provide relief from nearly every symptom of hysteria.