Nearly everybody has had the flu at some point or knows someone who has. Also known as influenza, this is an infection caused by a virus that attacks the respiratory system, which includes the lungs, bronchial tubes, nose and throat.

Those who generally have a healthy slate and catch influenza is likely to feel pretty awful for a few days. Despite this, complications will probably not develop throughout its course, nor will hospital care be likely. However, for those who have a chronic illness or an otherwise weakened immune system, influenza has the potential to be fatal.

Those who find themselves at a higher risk for contracting influenza, the first organized line of defense would be to get a flu shot. In 2010, in addition to the usual shot against influenza, another kind of flu shot may be required to obtain. This new flu shot fights against the recently discovered novel H1N1 swine strain of flu. Doses for this strand of influenza are available with that of the standard influenza vaccine.

At first, influenza comes off as the typical common cold with all of the usual suspects, in terms of symptoms: sneezing, sore throat and a runny nose. However, the difference between the two include the fact that the flu shows up suddenly whereas the common cold gradually creeps in over time. Additionally, a cold usually just comes off as an inconvenience, and the flu usually makes its victims feel very awful. 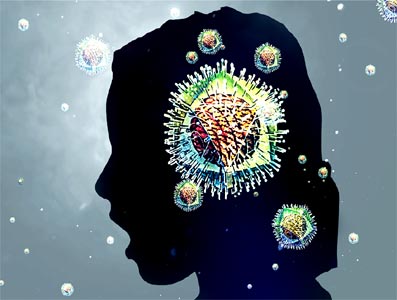 The most common symptoms and signs of the flu generally include:

Who are experiencing the symptoms and signs for influenza and believe that they are at risk of developing further complications, it is important to contact the doctor. In an effort to prevent a much more serious complication, the doctor may recommend or prescribe antiviral drugs, which, if taken within the first 48 hours after the symptoms are first noticed, may reduce how long the influenza takes to run its course by one or two days.

Influenza viruses usually are transported through the air in little droplets, particularly when a person who is infected with the virus talks, sneezes or coughs. It may be possible to directly inhale the droplets or an object that is picked up may have the germs on it, such as a computer keyboard or a telephone, after which it is transferred right to the nose, eyes or mouth.

There exist three different varieties, or strains, of influenza viruses – influenza types A, B and C. The first type, type A, is the kind that usually causes the worldwide pandemic of deadly influenza, which is known to strike roughly every 10 – 40 years. Type B is the kind that is known to cause outbreaks in a smaller and more localized areas. Both types A and B are generally the kind of flu that will typically circulate nearly every winter. Type C, on the other hand, has never been found in connection with any large epidemic.

Type C, unlike its counterparts, is a relatively stable strand of influenza. However, both types A and B are always evolving and changing, causing new strains of its type to appear on a regular basis. Even though once a person has caught the flu and antibodies against that particular strain are developed, those same antibodies will not be able to fight against newer strains of that type. It is for this reason that doctors highly recommend that a person get a fresh flu shot every year.

Those who are at an increased risk of contracting influenza, or any developing complications thereof, are those who:

Children who are undergoing a long term therapy with aspirin are also at an increased risk.

It is safe for children at the age of six months and older to receive the flu vaccination. Even if the child itself does not pose a risk of contracting the flue but does live with someone who has risks of obtaining it, it is recommended to have the child vaccinated regardless. This way, it will be far less likely that the child will infect another person. As such, the more people who choose to get immunized, the less likely it is that an influenza virus will work its way through a community.

Those who are young and healthy, it is usually not very serious to contract influenza. Despite the fact that it will cause a little misery during its lifetime, there are usually no lasting effects once the influenza virus goes away on its own. However, those adults and children who pose high risks for contracting the virus may experience certain complications, such as:

Of the aforementioned potential complications, pneumococcal pneumonia, which is a serious infection of the lungs and caused by bacterial, is both the most common and the most serious. Especially in those with a chronic illness and older adults, pneumonia can be fatal. The best way to protect against both influenza and pneumococcal pneumonia is to get a vaccination.

More often than not, there is nothing more that can be done other than keeping plenty of fluids and maintaining plenty of bed rest in order to treat the flu. However, in some instances, the doctor may wish to prescribe certain antiviral medicines, such as zanamivir (Relenza) or oseltamivir (Tamiflu).

Both of these drugs will treat the two influenza types, A and B, and they do so by deactivating an enzyme that the virus requires in order to grow and spread. If they are taken shortly after the symptoms develop, it might be able to effectively shorten the lifespan of the illness by at least a day or two. Oseltamivir can be taken orally, though zanamivir must be inhaled by way of a device that looks quite similar to an inhaler for asthma and it should therefore not be used by anybody who is a sufferer of respiratory conditions, such as lung disease and asthma.

Both medications are known to possibly cause side effects, which may include nausea, vomiting, lightheadedness, trouble breathing and loss of appetite. Prolonged use might also lead to the development of viruses that are resistant to antivirus medications.

In November 2006, the makers of Tamiflu were required, by the Food and Drug Administration (the FDA), to include a warning on their packaging that those who suffer from the flu, in particular children, may see an increased risk of confusion and self-injury after they take Tamiflu. The FDA therefore recommends that those with the influenza virus who choose to take Tamiflu are to be very closely monitored for instances of unusual behavior. Before taking any medicine that is antiviral, make sure to discuss all of the possible side effects that may occur with a doctor.