As they infect certain parts of the body, Lyme disease bacteria can manifest different symptoms at various times. Also, every patient will not necessarily have all of the symptoms that are attributed to it. If you suspect that you are falling victim to this illness, it is essential for you to contact your physician in order to get a proper diagnosis as quickly as possible.

Often, the first symptom that appears is a circular rash known as “erythema migrans” (EM). It is found in about 70-80% of all those infected by the bacteria and originates from a tick bite after 3 to 30 days have passed.

As it grows larger, the rash may take on a bull’s-eye appearance as the center of the rash becomes clear, and while it might become warm, it seldom becomes painful. In time, some victims develop more EM lesions throughout the body, and they may also show signs of chills, fatigue, fever, swollen lymph nodes, and joint and muscle pain, but there are no other signs of infection.

Failing to go for treatment

If the infection is untreated and continues to spread, new symptoms may begin to appear, such as loss of muscle tone on at least side of the face, which is known as Bell’s palsy. There may also be neck stiffness and severe headaches caused by meningitis, heart palpitations and an irregular heartbeat, pain moving from one joint to another, and shooting pains that cause the victim to lose sleep. 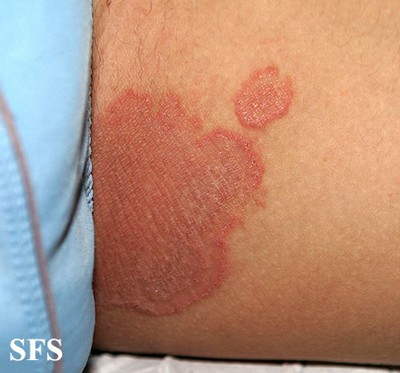 In time, more than half of those who have an untreated bacterial infection will begin to experience periodic bouts of arthritis, accompanied by noticeable joint pain and swelling, especially in the knees.

About 5% of those who remain untreated develop chronic complaints related to neurological disorders—including tingling or numbness in the hands and feet, and problems related to their short-term memory and their ability to concentrate.

In the United States, deer ticks are the prime carriers of the bacteria, and since they are brown and quite small, they are virtually impossible to see.

The ticks, which are particularly active during the summer months, will attach themselves to an unsuspecting victim and gorge themselves on that person’s blood until they become quite swollen. (They can infect mice, dogs, cats, and horses as well.)

Since this process may last as long as 48 hours, it is felt that prompt removal of the ticks will obviously help prevent infection.

Some common risk factors for contracting Lyme disease include:

Here are some tips for protecting yourself from tick bites:

Since its symptoms can be related to many other medical conditions, this illness can be difficult to diagnose. If you and your physician agree that Lyme disease may be present, the next step will be to do a complete physical examination and bring your medical history up to date. If your case is more complex, other tests may also be required before beginning treatment.

Note that it may take as long as two months after a patient has become infected to detect antibodies with a blood test, and while it may be conclusive, the test does not pinpoint the exact time when exposure to the disease took place. Prior to having the test, you should discuss any concerns you may have with your doctor, such as its risks, what is involved, and what the results may indicate.

These are three types of antibody tests currently in use:

Other testing methods for Lyme disease

The Polymerase chain reaction (PCR) test reveals the Lyme disease bacteria’s DNA (genetic material), and it may be useful in identifying a patient’s active infection if the symptoms have not been relieved with antibiotic drugs. Since a PCR test is costly and requires a high degree of technical skill, it is used less frequently than antibody testing. In addition, the standards for it have not been fully developed, and false-positive results may be produced in some cases. Another option, a skin-culture test, uses a tissue sample from the patient to study the Lyme disease bacteria, and while it may be accurate, the fact that the results may not come back for several weeks is often looked upon as a drawback.

Most patients can be cured by using antibiotics, especially if they are administered before the disease has actually begun to progress. However, some people develop chronic Lyme disease that is resistant to antibiotics, which may be caused by an autoimmune response, hiding the fact that the infection is no longer present. They often experience arthritis, joint and muscle pain, fatigue, cognitive problems, and sleep disturbance on an ongoing basis.

Generally, cefuroxime axetil, doxycycline, erythromycin, amoxicillin, or another antibiotic is taken orally for a few weeks, and with more severe cases, the medication is administered intravenously. Women who are pregnant or breast-feeding, and children under the age of nine, are usually given penicillin, cefuroxime axetil, or amoxicillin when they contract Lyme disease. In addition, treatment will be based on any neurological, cardiac and arthritic symptoms that develop in the patient.

Note when these medications should be avoided because of dangerous side effects the patient may experience:

In all cases, consult with your physician before the symptoms become more severe.

As a rule, those who are given treatment when the infection has not progressed make a full and speedy recovery, and others also respond well to the antibiotics they are given when the disease is more advanced. In some cases, the disease will reappear, the systems will persist, and the patient will need additional, lengthy treatment. If treatment is delayed until the infection is far advanced, even after the infection is cleared, the patient may experience chronic pain, permanent neurological damage, and arthritis.

Vaccination against the disease

Anyone who at risk for contracting Lyme disease is encouraged to become vaccinated before spring arrives. The vaccine, which has been approved by the Federal Drug Administration (FDA) consists of a three-shot series given at least eight weeks part, and costs about $60 for each injection. Most adults are provided with 80% protection with this regimen, and to maintain immunization, additional booster shots may be required.

The topic of “chronic” Lyme disease is actually quite controversial. After receiving recommended treatment for the bacterial infection, some patients experience the return of symptoms that are both chronic and persistent. As a result, their standard of living is lowered, and they also they become unable to work, take care of their children, or participate in various activities they used to enjoy. A few doctors have even reported that their patients experienced a total personality change which resulted in violent, criminal behavior, and that they have even died of the disease.

Both physicians and researchers who feel that chronic Lyme disease actually exists maintain that the bacteria causing the illness has a dormant form, and that it is capable of “hiding” within human cells, which make it difficult them to detect and cure. When these bacteria become active once again, they can cause serious damage in some form.

Neurologists who have done brain scans on Lyme disease patients have found some cases of severe hydrocephalus, known as “water on the brain.” Autopsies that have been performed on patients who may have died from chronic Lyme disease revealed tissue throughout the spinal chord and brain that was seriously deteriorated, and they indicate that the condition often goes untreated during the crucial early stages.

Another group of physicians maintain that the problems occurring after treatment for Lyme disease should be referred to as post-Lyme syndrome and are attributable to one of these factors:

Many physicians apparently agree that persistent Lyme disease actually exists, but they also feel that some patients fail to benefit from being treated with intravenous antibiotics indefinitely. A study reported in the New England Journal of Medicine in 2001, conducted by Mark S. Klempner, MD et al., claimed that patients with chronic Lyme disease get no benefit from this treatment.

Since then, many insurance companies and doctors have used this report as the basis for rejecting claims and refusing treatment, stating that to do otherwise would be both irresponsible and contra-indicated. Others consider the Klempner study to be flawed and have continued to treat their chronic Lyme disease patients using established methods and medications.