Vitamin B6 is a part of the vitamin B complex group. The vitamin is water-soluble and is sometimes referred to as Pyridoxine. This vitamin aids in the metabolism of amino acids and the production of glucose from glycogen.

Though many of the vitamin B group members have properties that work against cancer, vitamin B6 has no known anti-cancer effects associated. 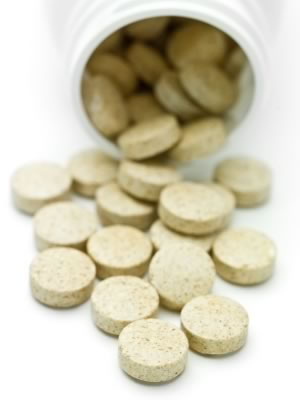 More studies must be conducted to conclude its effects. Some unofficial studies indicate vitamin B6 effectiveness in preventing colon cancer in healthy patients. However, more studies are necessary. Some experts indicate that vitamin B6 have been effective in treating patients with prostate cancer.

Experts recommend taking the vitamin after a meal and with copious amounts of water. Children who need a vitamin B6 supplement should consult with a physician prior to consumption.

The daily allowances of vitamin B6 vary by age groups. Experts recommend increasing vitamin B6 dosage as the person ages:

Vitamin B6? Get Remedies Fast!

Find Vitamin B6 Products on Amazon

To prevent heart disease or lower homocysteine levels, patients should consume 3.0 mg per day of vitamin B6. Physicians have in the past prescribed more to treat certain conditions. However, vitamin B6 should not be consumed in doses above 100 mg per day without a doctor’s supervision.

Sources of Vitamin B6

As mentioned earlier, experts recommend receiving the daily recommended allowance of food from natural food sources. Some of these sources may include the following foods:

History of Vitamin B6

The enzymes promoted by vitamin B6 involve several amino acids. Scientists have documented over 140 activities related to the presence of vitamin B6 in the body.

Ailments from Vitamin B6 Deficiencies

The benefits from vitamin B6 consumption are plentiful. Conversely, the lack of vitamin B6 may cause some undesirable conditions. Some of the most common deficiencies are listed below:

This condition is referred to as smooth tongue. Experts have suggested that a tender or painful tongue may be the result of a vitamin B6 deficiency.

Angular cheilitis describes a lesion at the corner of the mouth that is usually characterized by cracks or splits. The lesion may also be inflamed. Scientists have come to believe that vitamin B6 deficiency may play a role in the development of this condition.

Intertrigo describes the rash or inflammation that occurs where the body folds. Areas such as, under the arms, under the breast and other places are affected. Vitamin B6 deficiencies may lead to this condition. More research is needed to prove this conclusively.

Conjunctivitis describes the inflammation of the eye. The condition often occurs because of an allergic reaction or an infection. The condition may be viral, but it is sometimes bacterial. Vitamin B6 deficiencies may also be the cause of this condition as well.

Seborrhoeic dermatitis may also be known as Seborreheic eczema. The condition affects sebum rich areas of the body, such as scalp, face and torso. The skin becomes scaly, flaky, itchy, and red as a result. These symptoms are characteristic of vitamin B6 deficiencies.

Somnolence is a strong desire for sleep for long periods of time. This chronic condition may be a result of a vitamin B6 deficiency.

When a vitamin B6 deficiency occurs in the body, individuals have reported states of confusion or loss of orientation. The person may forget their personal identity or be unable to locate themselves properly within the world.

Individuals who have deficiencies of vitamin B6 in their diets are at greater risk for heart disease. Individuals with high homocysteine levels associated with low levels of vitamin B6 may have damaged blood vessels and increased chances of blood clot formation.

Vitamin B6 deficiencies are often associated with depression. Serotonin levels affect a person’s mood. Experts suggest that vitamin B6 plays a role in the production of serotonin. Therefore, increased vitamin B6 intake may improve depression. More research is being conducted to determine its true benefit.

Experts have found that deficiencies in vitamin B6 may contribute to the symptoms of carpal tunnel syndrome. More studies should be performed to prove this finding conclusively.

Vitamin B6 deficiencies may be a factor in symptoms associated with PMS. Many of the studies conducted to prove that vitamin B6 deficiencies played a role PMS were not designed properly. Therefore, more research must be conducted to prove this finding conclusively. However, many female patients have remarked that vitamin B6 supplements have alleviated some of the symptoms and improved their moods. Consult a physician before beginning a vitamin B6 regimen. Improvements may take up to 3 months.

Some experts suggest that daily consumption of vitamin B6 may reduce the risk of Parkinson’s disease. This is thought to be true since the vitamin improves neurological functions. More studies are needed before this finding is conclusive. 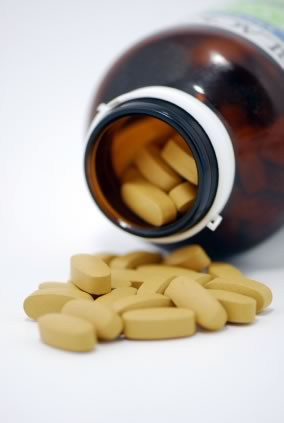 Patients consuming anticonvulsants or corticosteriods may experience a vitamin B6 deficiency, as well.

Severe vitamin B6 deficiencies may lead to damage to the nervous system and also to the skin. Less severe deficiencies due to an impaired tryptophan-niacin conversion may manifest as lesions to the skin.

Physicians can detect this impairment by testing the urine for xanthurenic acid. Vitamin B6 deficiencies may also occur from an impaired process of “transsulfuration of methionine to cysteine.”

Precautions when Taking Vitamin B6

Patients who are taking any of the following medications should consult a physician prior to starting a vitamin B6 regimen:

Most of these medications may require a supplement because the medications deplete the system of vitamin B6. However, it is also always recommended to consult a physician to avoid complications or problems associated with vitamins.

Antibiotics: Vitamin B6 vitamins have been known to interfere with the absorption of the antibiotic tetracycline. The timing of the vitamins and antibiotics should be spaced out in order to avoid unpleasant interactions.

Chemotherapy drugs: Vitamin B6 may reduce some of the side effects associated with chemotherapy drugs, such as 5-fluorouracil and doxorubicin. Consult a physician before taking a vitamin B6 supplement.

Erythropoietin (EPO): Erythropoitin therapy may deplete vitamin B6 levels present in the body. Therefore, some people may need a supplement in order to replenish vitamin deficiency.

Levodopa: This medication is used to treat Parkinson’s disease. Experts suggest that vitamin B6 reduces the effectiveness of levodopa. A physician should determine the dosage of vitamin B6 that is required to avoid interaction with the drug. A physician should closely monitor the consumption of both drugs in combination.

Phenytion or Dilantin: Patients who take phenytoin for seizures may notice that the drug is slightly less effective if taken with vitamin B6. Patients should consult a physician prior to taking the drugs in conjunction.

Vitamin B6 or pyridoxal phosphate is involved in several biological processes. Pyridoxal phosphate is involved in neurotransmitter synthesis, histamine synthesis, macronutrient metabolism, gene expression and hemoglobin synthesis. This metabolically active form of vitamin B6 acts as a coenzyme to help facilitate transamination, racemization, decarboxylation, elimination, replacement, and beta-group interconversion reaction. Vitamin B6 is metabolized in the liver.

Pyridoxal phosphate (PLP) plays a significant role in the metabolism of amino acids. This vitamin assists two enzymes as methionine is converted to cysteine via two separate reactions. When there is a vitamin B6 deficiency, there is decreased activity related to these enzymes. Pyridoxal phosphate is also responsible for assisting the enzymes found in the metabolism of selenomethionine to selenohomocysteine.

Vitamin B6 plays an important role in the biosynthesis of sphingolipids. This process is dependent upon vitamin B6 because one of the enzymes, S1P Lyase needs the vitamin to complete the process.

In most processes, vitamin B6 assumes the role of a coenzyme to other enzymes in the body in the metabolism process. Vitamin B6 is found in the following processes:

This process is responsible for transforming homocysteine into cysteine. The interim process involves changing cistation into cysteine. Pyridoxal phosphate plays a role in the gene expression process by increasing or decreasing the expression of genes present. A deficiency of vitamin B6 will lead to an increased expression of albumin mRNA.

Pyridoxal phosphate or vitamin B6 is often involved in the metabolism of histamine.

The synthesis of hemoglobin is facilitated by pyridoxal phosphate. Vitamin B6 can bind on two sites present on hemoglobin. This process facilitates the binding of oxygen to hemoglobin.