Where Does Yarrow Come From?

Achillea millefolium, or yarrow, is also called milfoil, sanguinary, or stanchgrass, among a long list of other names. It is capable of surviving in most soils under most situations, however, it prefers well-drained soil in direct sunlight. These plants are capable of tolerating lime, shade, and lack of water. As a matter of fact, not only do yarrow plants live longer in poor soil, but they also improve soil fertility.

Very often the health of plants growing nearby are improved and their essential oil content is enhanced, which, in turn, protects them from insects that would otherwise destroy them. Although native to Europe and Asia, yarrow became naturalized in North America as well as other countries worldwide. Throughout the eastern and central United States and Canada, yarrow is commonly found along roadsides, in old fields, pastures, and meadows. 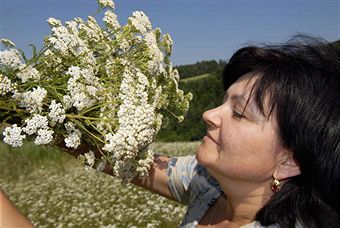 In ancient folklore, yarrow, which was considered to be dedicated to the Evil One, also inherited the nicknames Devil’s Nettle, Devil’s Plaything, and Badman’s Plaything.

At one point in history, Achilles, a Greek hero of the Trojan War, used this plant to heal his soldiers, which explains why it is also referred to as Soldier’s Woundwart. It is said that he learned this remedy from his mentor, Chiron the Centaur.

After Achilles introduced this herb to the battlefield, it was used constantly up until the time of the Civil War. During this time period, the plant was crushed and applied to bullet and shrapnel wounds. Yarrow was supposed to be extremely effective in healing wounds, especially those that were caused by iron weapons. Some believed they could be protected from evil by burning yarrow on the eve of St. John’s Day.

Others believed that good health in the coming year would be guaranteed if a bundle of yarrow was tied together and hung over a doorway or over an infant’s cradle on Midsummer’s Eve. Druids used the stems to assist in foretelling the weather and the Chinese used the stems to see into the future. Many young girls burned yarrow and chanted, “Good morning, good morning, good yarrow, and thrice good morning to thee.

Tell me, before this time tomorrow, who my true love is to be,” in hopes of discovering the identity of their future husband. The importance of yarrow in ancient history can especially be seen with the discovery of a 40- to 60,000-year-old Neanderthal whose remains were found holding yarrow among other herbs.

What Is Yarrow Used For Today?

Bloodwort, another name for yarrow, is known to be a fever reducer, to have the capability to lower blood pressure, to tone blood vessels, and to be a urinary antiseptic. It is also popular for its ability to repel beetles ants, and flies. The yarrow leaves have been used to cleanse cosmetics from greasy skin and the flowers have helped to provide yellow and green dyes.

Most importantly are the compounds found in the essential oil of the yarrow plant and what healing properties they have:

Yarrow also carries along with it a broad spectrum of specific medicinal usages such as:

The healing properties of yarrow don’t even stop at this list. The leaves of the yarrow plant are often smoked as a substitute for tobacco. The fresh leaves are chewed in order to relieve the pain of a toothache. In Sweden and Africa, yarrow is used to brew beer instead of hops due to the fact that yarrow is more intoxicating.

Yarrow oil is even used in most shampoos. It can also be used to open up the pores of the skin, thus helping obstructed perspiration. It is good for kidney disorders and is recommended in children when beginning symptoms of colds or the measles are present. The essence of yarrow flowers, especially the pink flowers, is good for people that need to release emotional energies that they have picked up from the environment, family, friends, and work.

Purposes That Have Been Proven Effective

It has been scientifically proven that yarrow oil is an effective anti-inflammatory, antioxidant, and antimicrobial. It is proven to be a diaphoretic, which means it increases the temperature of the body thus opening pores in order to help produce perspiration which, in turn, eliminates toxins through the skin. Yarrow can prevent or stop the growth of microorganisms, which makes it an antiseptic. It has also proven to be an antispasmodic and an astringent.

Yarrow is an emmenagogue, meaning it promotes menstrual discharge. It helps open blood vessels and is very useful in healing wounds. It has been determined to exhibit anti-tumor properties.

It is known to decrease cholesterol and to increase bile flow. It is even often used against gastrointestinal disorders and hepatobiliary disorders, or disorders which effect the liver and/or biliary tract. It has been determined to be good at healing yeast infections and boils, also. On the other hand, there is little evidence to support the fact the yarrow is an effective treatment of the common cold.

There is no regular set of dosing standards for yarrow because it depends on how it is being used and what it is being used for. If a supplement in capsule form is being taken, most likely the dosage is to take two capsules two times a day with water at mealtimes. A handful of dried yarrow can be used to make a cup of tea in order to relieve a fever.

If equal parts of Urtica Leaf tincture, Taraxacum Root and Leaf tincture, Yarrow tincture, and Angelica tincture are combined, children can be given a maximum of ten drops (maximum dose for adults is 50 drops) up to five times a day to help relieve a fever.

For menstrual cycle regulation use 20 drops of the tincture, which can be purchased in that form, two times per day from the beginning of menses and for the life of two full cycles.

If yarrow is combined with Petroselinum Crispum and red wine, it can prevent female and male sterility. Simply used 20 drops two times dailty for two or three months. For pregnant persons hoping for a more simple labor, drink two cups of yarrow tea per day starting approximately a week before labor. To make this tea, use one handful of yarrow and two spoonfuls of Rubus idaeus. For postpartum tiredness and depression combine yarrow tincture with Cannibus sativa tincture and hops tincture. Hemorrhoids can be treated by using yarrow internally and externally. 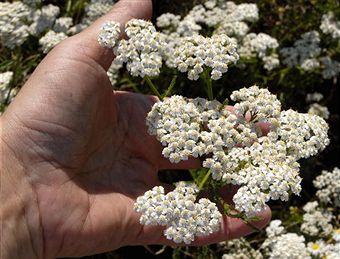 For internal use, take 20 drops a day. For external use, use a poultice or cream but add five grams of Calendula and one gram of Bryony tincture.

For ulcers in the stomach and duodenum, a complex regimen is needed so an herbalist is to be consulted for appropriate dosing, diet, and other herbs that may be necessary.

An herbalist also must be consulted for the treatment of Crohn’s disease and arthritis.

There is a cream made with yarrow for wounds and abrasions. For eye infections, use compresses made of yarrow, but they must be very well filtered so as to not scratch the eye.

Caution should be exercised when using yarrow if the person has an allergy to ragweed. Avoid use if there are gallstones present. An allergic skin rash or skin sensitivity to light may be caused by extended use of yarrow whether it is being used medicinally or in the diet.

Using yarrow while pregnant may lead to reduced fetal weight and increased placental weight. Yarrow use may also alter estrogen activity. Women who experience heavy periods or who have pelvic inflammatory disease should not use yarrow. Even though yarrow is used to treat wounds, it still should not be used to treat large, deep, or infected wounds. The actual leaves of the yarrow plant should never be used alone internally.

If fresh yarrow is not being used, then it must be dried. Take the whole yarrow plant, as it is all beneficial, and hang it upside down away from the sun, moisture, and dust for a few days. If the interest is for fresh yarrow, the plant flowers from May to June. Many different species of yarrow have different colored flowers, but it is best to use the white native species because the others are cultivated for their smell and color, not medicinal purposes.

The quality of yarrow can be judged simply by its smell. When making the tincture, the yarrow used can be fresh or dried. For oils and salves fresh yarrow can be used because this plant has a low water content and will not liquify the oil. Dried yarrow should be used for teas and fresh yarrow leaves should be used for poultices. The bitter taste of this plant can be covered up by cooking it into a cough syrup using something sweet such as honey.

When shopping for yarrow, the USP, or United States Pharmacopeia, symbol guarantee safety and quality in those brands. Some popular brands of yarrow supplements include Nature’s Way, Solaray, and Nature’s Answer. Yarrow can be found throughout the internet and herbal websites as well as in local herbal stores and even some big name grocery stores that have a natural section. Prices are as low as $2.50 and simply depend on the purity and quality of what is being purchased.