How often do people complain about pain or bloating in their stomach after eating? Unfortunately, this is an all too common occurrence, and not just for Americans, but people the world over. Indigestion, officially known as Dyspepsia, and more commonly called an upset stomach, is a condition that affects literally millions of Americans every year. This common problem shows up as a constant or re-occurring pain in the upper part of the person’s abdomen, and it is routinely accompanied by nausea, heartburn, burping, and bloating.

As it is typically associated with gastritis or GERD (gastroesophageal reflux disease), it is not usually considered to be dangerous to the patient’s life, although it can significantly affect the individual’s quality of life. When it does result in unusual cases from peptic ulcer disease or in very rare instances from malignant cancer, it can certainly be life threatening, so in scenarios where the patient is fifty-five years of age or older, tests should be performed to make certain that there is not a more sinister underlying element involved. Prevention, cures, and remedies are numerous and varied, and along with the potential causes and any risk factors will all be investigated in this article.

Typical symptoms of indigestion include pain in the upper abdominal region, along with bloating, feelings of fullness, and sensitivity when touched there. Sometimes these include feelings of nausea and involve heavy perspiration. 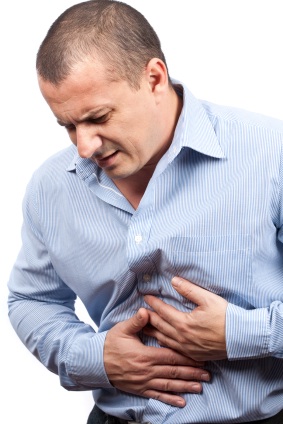 It is not uncommon for indigestion symptoms to be brought on as a result of medicines taken, including drugs like NSAID’s (non-steroidal anti-inflammatory drugs), commonly taken as painkillers; corticosteroids; bisphosphonates; theophylline, employed to fight chronic lung disease; nitrates, utilized for angina; and antagonists, typically used to treat high blood pressure.

As of yet, no specific causes have been conclusively proven to lead to indigestion. Physicians and researchers honestly are not sure what makes this problem chronically afflict some individuals, while others are spared. Theories on what might be underlying this frustrating condition abound, ranging from delayed emptying of the stomach, to too much acid secretion, to hypersensitivity of the stomach, to a stiff stomach.

If the person suffers more symptoms than these commonly associated with indigestion, such as throwing up blood, trouble swallowing foods, a loss of appetite, unintended weight loss, continuous throwing up, or swelling of the abdomen, then the individual likely has peptic ulcer disease or a hazardous form of malignant cancer, and should be tested and formally diagnosed immediately.

As mentioned before, those individuals who are under fifty-five do not need extensive testing to simply be treated, unless they have the additionally rare and potentially dangerous symptoms mentioned previously. But for those persons who are fifty-five and older, there is an increasing risk of the underlying problems being caused by potentially life threatening cancer. Therefore, older individuals should be screened by upper gastrointestinal endoscopy. Utilizing this conclusive test, the doctors will be able to eliminate the possibilities of peptic ulcer disease, medication-related ulceration, or cancer and other unusual problems.

The very best form of prevention concerning indigestion centers around positive improvements to lifestyles. Less heavy, fattening foods should be consumed in favor of healthier fruits and vegetables, and leaner meats should be selected like chicken, fish, and pork, instead of heavier beef and steak. These better, leaner, lower fat foods all digest quicker and easier. More exercise, such as walking or jogging, should be encouraged, particularly after meals. And, it is a well known adage that a person should never go to bed immediately after eating a heavy meal, especially with an overloaded stomach.

There are also a variety of foods that specifically help to prevent the condition of indigestion. These are listed below in order of effectiveness, as follows:

A variety of different types of treatments are available for indigestion. For example, the Mayo Clinic recommends a change in lifestyle, as well as behavioral therapy, to treat the condition. Numerous different classes of medications have been tested and tried out over the years, with varying degrees of success. Herbal remedies have also demonstrated efficacy in dealing with and lessening the severity of the symptoms of indigestion. In particular, Japanese herbs have proven to be effective in treating indigestion for literally thousands of years. Other alternative forms of treatment, such as hypnosis and hypnotherapy, have been sought out and utilized as well.

A number of different classes of medicines have been used over the years in an effort to treat indigestion, with varying results. The more traditional kinds of medications have not proven to be so effective. These include the use of the following: antacids, H2-RAs, or H2-receptor antagonists, prokinetic agents, and antiflatulents.

The newer kinds of so called gastrointestinal super drugs, commonly referred to as PPI drugs, or proton pump inhibitors, include Nexium, Prevacid, and Prilosec. These medicines have been FDA approved for the treatment of conditions and diseases which are similar to indigestion, like gastroesophageal reflux disease (GERD), duodenal and gastric ulcers, H. pylori, Zollinger-Ellison syndrome, erosive esophagitis, and NSAID-induced ulcers. Some studies have demonstrated their effectiveness against indigestion, as well.

Risks and Side Effects

The problem surrounding the utilization of these medicines for the treatment of indigestion centers around the risks increasingly associated with them. Despite the fact that the majority of physicians insist that such drugs are safe and have limited side effects, a number of side effects have begun to be observed in patients, now that these super drugs have been on the market for several years. These sometimes serious side effects comprise a variety of ills ranging from osteoporosis to dizziness, pneumonia, and a greater possibility for heart attacks, among other potential symptoms.

What is worse than these possible side effects, though, are reports from new research which demonstrate that the very symptoms that these super drugs are supposed to be curing, they may actually be creating or even worsening. A recent study from the well respected American Gastroenterological Association (AGA) Institute, published in their journal Gastroenterology, discovered that in undergoing a PPI medication treatment for eight weeks or longer, the patients began to suffer from the acid-like symptoms including indigestion, heartburn, and acid regurgitation. 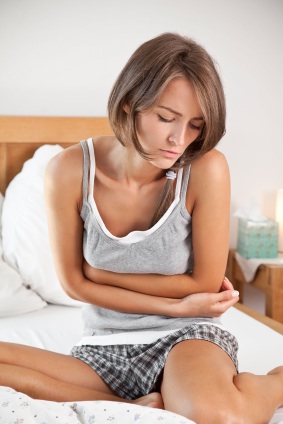 In fact, a greater than forty percent of normal volunteers in the research study who had never before suffered from indigestion, heartburn, or acid regurgitation suddenly had these types of symptoms during the weeks after they had stopped taking the PPI drugs. This all argues against the typical medications commonly used to treat indigestion as being either ineffective, causing worse side effects than the conditions which they are supposed to cure, and/or causing the same problems that they are supposed to be treating.

A variety of herbs have been found to be effective in treating indigestion in studies dating back to 2002. No side effects have been either studied or reported in their use. These herbs are all commonly available at a local health food store or natural food outlet, and they are not nearly so expensive as the above mentioned medications.

Besides these naturally occurring herbs, a German engineered phytopharmaceutical, which is a multiple herbal extract Iberogast has been tested in studies conducted in 2004. It demonstrated significant reduction of the symptoms in the tests. No serious side effects were reported in its utilization.

Known to alleviate the effects of indigestion for thousands of years, a combination of eight different herbs was concocted by the ancient Japanese. This herbal combination is still known today as Rikkunshi-to. It does prove to be effective in lessening the pain associated with functional indigestion.

A number of individuals who have indigestion, who suffer from a reduced quality of life, and who are desperate to find real, tangible relief from the uncomfortable symptoms, have gone beyond the boundaries of traditional and even herbal medicines in their search for effective cures. The most commonly pursued alternative treatment involves the use of clinical hypnosis. Researchers investigating this atypical cure have discovered that the use of hypnotherapy does help to cure both the actual symptoms, as well as to lessen their severity.

As it turns out, a study done comparing the results of hypnotherapy to traditional medicinal remedies for indigestion demonstrated that in both the short term and long term, hypnosis worked better. In the study performed, one hundred and twenty-six victims of functional indigestion were involved.

They were divided into three different groups, the first group receiving hypnotherapy treatments, the second group getting supportive therapy along with placebo, and the third group taking traditional medicinal treatments. The participants’ symptoms were considered and evaluated at three different points, before the treatments commenced, at the conclusion of a sixteen week treatment period, and after a fifty-six week follow up period.

While in the short term, the hypnotherapy group outperformed the medication and traditional therapy groupings, over the longer term, the hypnotherapy batch of research participants demonstrated substantial improvements to their condition and its accompanying symptoms. In fact, a full seventy-three percent of the participants in the hypnosis grouping showed real improvements in their condition, as contrasted with forty-three percent in the medicinal grouping and only thirty-four percent in the therapy grouping.

Although there are no known risks associated with the hypnosis treatment for indigestion, this form of cure continues to be considered to be the “alternative” method of treatment, even after it is clinically demonstrated to be by far and away the most effective one available. Why is that?

The reasons are likely two fold. On the one hand there is a stigma held by the public, along with traditional medicine, that claims that hypnosis and hypnotherapy are a somehow magical or voodoo forms of cure, not applicable to people living in a modern society or compatible with a technologically advanced world. On the other hand, and perhaps this is a more satisfying, if frustrating, explanation, too few doctors are properly trained in the techniques of hypnosis and hypnotherapy for this to be a commonly used method of treatment for indigestion.

How does hypnosis help to deal with the symptoms of indigestion so well? Since the medical field has not yet been able to conclusively identify the causes for the condition, the symptoms must themselves be addressed and remedied. Because of the calming and therapeutic nature of hypnosis in general, it is an effective cure. Through hypnotherapy, the indigestion victim gains the ability to concentrate all of their energies and powers on the healing of the suffering areas.

On top of this, hypnotherapy helps with increasing the speed that the stomach empties itself. It is well known by the traditional medical establishment that by reducing the time necessary for gastric emptying, the common symptoms of indigestion are alleviated, and the individual’s quality of life is substantially improved. In this way, hypnosis and hypnotherapy have proven themselves to be the most effective means of curing the underlying symptoms of indigestion, having demonstrated that they are extremely efficient and effective.

Indigestion remains a somewhat unique phenomenon in modern medicine. As its causes can not yet be accurately or fully ascertained, the treatment of the very real and frustrating condition by traditional medicine proves to be limited. The diagnosis of the condition is not difficult, and in general the risks associated with it prove to be harmless.

Prospective preventions, cures, and remedies for it are varied, and include lifestyle changes, behavioral therapy, traditional medicines, super drugs, traditional herbal remedies, Japanese herbal remedies, and alternative forms of treatment, notably hypnosis and hypnotherapy. Even though the causes of this annoying condition can not be determined with any certainty still, the good news is that studies have now conclusively demonstrated that effective relief of the condition can be found, and the victim will lead a normal, high quality of life existence once more.