The liver is one of the most important organs in the human body. As the largest organ inside the body, it is about the size of an American football and weighs 2 to 3 pounds. The liver is located in the upper-right quadrant of the abdomen, under the rib cage. It is composed of two lobes, and each of those are made up of smaller lobules.

Oxygen is supplied to the liver from the hepatic artery, while supporting nutrients are delivered via the portal vein. The portal vein flows to the liver through the intestines and spleen, where it delivers both important nutrients for protein and cholesterol production and chemicals that need to be detoxified.

Functions of Your Liver

The liver has several functions and is considered one of the busiest “factories” in the body. Some of the main functions of the liver are to create components of the blood from raw nutrients, produce necessary enzymes and proteins, balance hormone levels, and metabolize foreign substances in the body, detoxifying it. In addition, the liver plays a secondary role in maintaining the immune system and is responsible for creating bile, which aids in digestion. Because the liver produces bile, it is not only an organ but, medically speaking, a gland. Once the bile is produced, it travels to the gall bladder for storage. 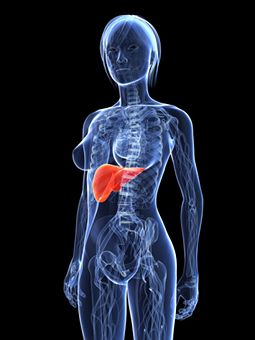 There is no one ailment known as “liver disease.” Liver disease is a generalized term for several different maladies that affects the normal functioning of the liver, the loss of which can cause grievous injury to the rest of the body.

Doctors have pushed to limit the use of the term, in favor of the more specific diseases, but the term continues to persist. Liver disease is also sometimes known as hepatic disease.

The liver is a very hardy organ and the only part of the body that can regenerate itself. Even so, liver disease can cause the widespread failure of the organ once the disease has caused 3/4 of it to shut down. Before this time, the liver will still function properly.

Liver disease is a broad category of other, more specific, diseases. These specific conditions that cause liver disease can work alone or in conjunction. One disease, often leads to another, more severe form.

The two most common forms of liver disease are cirrhosis and hepatitis. In cirrhosis, normal liver tissue is replaced with non-functional scar tissue that never heals. If a direct cause of the liver disease can be determined, it is possible to stop it from destroying any more of the organ. Other types of liver disease can damage the organ through inflammation, obstruction of bile, accumulation of cholesterol, decreased blood flow, foreign chemicals, or abnormal cell growth. Here are some of the diseases that are grouped into this category:

Liver disease has several symptoms that are in common, no matter the exact cause:

If the liver disease is caused by or develops into cirrhosis, the following symptoms can occur in addition to the general symptoms:

Several different risk factors exist that can lead to liver disease. Some of the factors can be avoided and others are genetics. 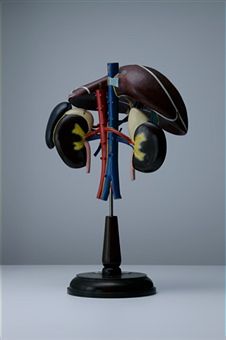 Since liver disease is an internal disorder, it can only be diagnosed by a health professional. Several blood tests exist to determine the presence of liver disease.

Additionally, a doctor will use a medical history, questionnaire, and observation of symptoms. Examination of the entire body is usually done as part of the diagnosis. Here are the blood tests made specifically to detect liver disease:

Some other blood tests are not made specifically to detect liver disease, but can be useful in the diagnosis:

In addition to blood tests, some physicians prefer to use imaging devices to create viewable images of the liver and other organs.

The last procedure that is used in determining liver disease is a liver biopsy. A long needle is inserted through the chest to pull out a small sample of liver tissue for examination. This can be used to help determine a specific liver disease once general liver disease has been diagnosed.

Since liver disease has many different causes and is made up by many different specific diseases, treatments can vary greatly. Hepatitis A treatment consists of keeping the body hydrated while the immune system does most of the work in clearing it up. If gallstones are the cause of the liver disease, passing them will relieve the disease and the liver will heal itself. If they cannot be passed, then surgical removal is necessary.

Patients with more severe forms of liver disease, such as late-stage cirrhosis will need medications to control the disease and maintain function. Protein absorption is big problem and part of the treatment for cirrhosis. To minimize water retention, a low-sodium diet is prescribed. If fluid does accumulate, it may have to be removed through paracentesis, which requires a needle be inserted through the abdomen and the fluid pulled into a syringe.

Surgery may be required for people with liver disease in cases where portal hypertension is present. This type of blood pressure increase can be relieved through one of two surgical operations:

In the final stages of liver disease, when failure is imminent, a liver transplant may be necessary. Before a transplant can be performed a thorough medical work-up must take place to determine if the transplant is possible and from whom a liver can be used. Many people require a liver transplant, but livers are only viable for a short time after death. In some situations, a living donor can be used in a procedure that removes up to one-third of their liver and puts it in the patient. There are currently more people that require new livers than new livers available. This means patients are placed on a waiting list. In some cases, when no liver is available for a length of time, the patient may die before he or she reaches the top of the list.

If a liver transplant becomes available, the procedure takes anywhere from six to twelve hours to complete. Even if the operation is successful, the patient’s immune system may still reject the transplant as a foreign body. Some medications may help the body assimilate the transplanted liver, but there are no guarantees. If everything goes well, a liver transplant patient will be allowed to go home after two or three weeks of recovery.

Although liver disease is a serious ailment that should first be cared for by a medical professional, several home remedies exist that can help to alleviate liver disease by relieving symptoms and cleaning impurities from the liver. The most important home remedy is to eat a balanced diet. A diet rich in lean protein, such as provided by eggs and fish is extremely important. Most fat should also be removed from the diet. In addition, fresh vegetables are important, especially carrots, spinach, papaya, and cucumber. Other vegetables important to healthy liver function are cabbage, mushrooms, sprouts, tomatoes, beets, and beans. These fresh vegetables can help to detoxify the liver, relieving symptoms. Here are some other home remedies for liver disease: