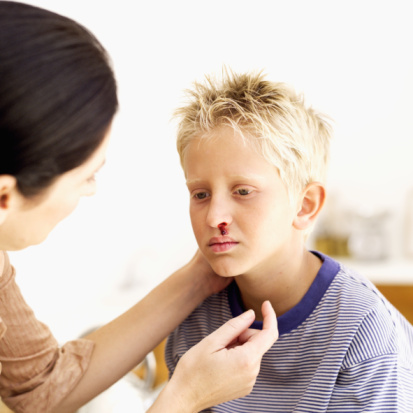 When a nosebleed occurs, it can be both frightening and dramatic, because it seems as if though an endless stream of blood is pouring out of the nostrils.

Luckily, the majority of nosebleeds are nothing to worry about and are generally able to be managed at home without any serious consequences; however, sometimes a nosebleed may require the occasional medical intervention.

Otherwise referred to as epistaxis, a nosebleed is categorized based upon where the bleeding began, and the two possible categories of nosebleeds are anterior and posterior.

Anterior nosebleeds is the most common of its kind, accounting for well over 90% of all nosebleeds. It is categorized as such due to the origination of bleeding being in the nasal septum, which is set towards the front of the nose.

These kinds of nosebleeds are the easiest to maintain control of, whether measures need to be taken by a doctor or in the comfort of a home.

Posterior nosebleeds, on the other hand, are the ones that are not as common as its counterpart. This type of nosebleed is more likely to occur within an elderly person rather than a younger one. It is categorized as such due to its posterior origination, meaning it is occurring from an artery that is in the farther back part of the nose.

Because an artery is bleeding, this kind of nosebleed is far more complicated to try to control, most often requiring a trip to the hospital and requiring that an otolaryngologist, who is a specialist with ears, noses and throats, take the reign of management.

One out of every seven people will, at some point throughout their lives, develop a nosebleed. More often than not, nosebleeds will occur when in a cold, dry climate, such as during the months of winter. While it is possible for a nosebleed to develop at any age in a person’s life, they are the most common in children who are aged two to ten years old and in adults within the ages of 50 and 80.

It also seems that nosebleeds typically occur during the morning hours, but the reasons behind this are unknown as of yet.

The one and most obvious symptom of a nosebleed is, of course, bleeding. Bleeding will normally occur through only a single nostril. However, if there is an excessive amount of bleeding, it is possible for the blood to fill up the affected nostril fully, causing it to overflow into the section inside the nose called the nasopharynx, where both nostrils converage, which would result in both nostrils bleeding.

It is also possible for blood to drip into the back of the throat or as far down as into the stomach, which, in excess amounts, can cause a person to either spit or even vomit blood.

Though it is not a common occurrence, it is possible for experience excessive blood loss.

Symptoms of losing an excessive amount of blood include

The nose is placed on a very vulnerable position because it sticks outward from the face, and it is also one of the parts of the body that is rich in different blood vessels.

As one may conclude, both nasal injury and bleeding are likely to occur if there is trauma to the face. The bleeding may be a simple, minor inconvenience or it might be a profuse occurrence.

Nosebleeds may also occur without physical trauma, such as when the membranes in the nose dry out and crack.

This usually happens during the months of winter or during a dry climate; both may result in dry air and warmth within the household from heaters.

The winter months also cause people to be more susceptible to nosebleeds because it is during this time that upper respiratory infections are more likely to occur and are more frequent, and this is when the fluctuation between the temperature and the humidity is dramatic.

When a person goes from the bitter outdoor cold environment and immediately goes into a warm, heated and dry home, nosebleeds are much more likely to occur. Nosebleeds may occur when there is low humidity in a hot and dry climate or in changes in the seasons.

People are more likely to develop nosebleeds when they are taking certain medications that result in normal blood clotting not functioning, such as aspirin or any other kind of anti-inflammatory medicine. When this occurs, even the smallest trauma may result in a substantial amount of bleeding.

There are certain factors that may predispose people to developing nosebleeds 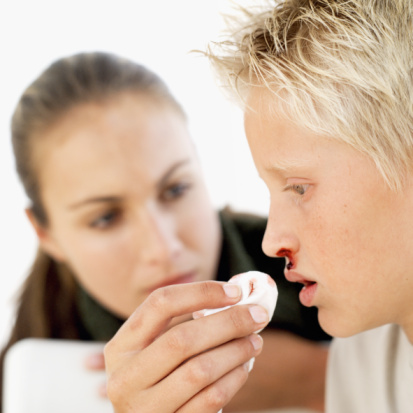 More often than not, bleeding will not generally require any medical intervention, especially in a small amount of bleeding.

For instance, when a person who is suffering a cold or suffering a sinus infection and blows their nose a little too vigorously, noticing that there is a little bit of blood in the tissue, it is usually enough to refrain from sneezing, nose picking or forceful nose bleeding to prevent the bleeding from getting any worse than that.

To stop a nosebleed

Should any blood reach the mouth, it is vital to spit it out into the sink or the toilet; swallowing it, especially in excessive amounts, may cause vomiting.

When to Visit the Hospital

When a nosebleed is recurrent or persistent, it is important to visit the doctor. The doctor may choose to recommend ceasing the bleeding by way of either a chemical swab or a heating instrument, which, in essence, is cautery of the blood vessel in question, or by way of an application of thrombin, which is a topical medication that aims to promote clotting of blood in the region.

There may be blood tests in order to determine if there are any bleeding disorders present. Should the blood persist, nasal packs may be used.

Minor nosebleeds which have stopped occurring will usually not require any further treatment. More often than not, the body will make its own clot where the bleeding occurred in order to prevent any further bleeding from developing.

When the source of the nosebleed is from a blood vessel that the doctor can easily see, the doctor make take a chemical known as silver nitrate and cauterize the blood vessel, which means to close it. This is done after applying anesthetic within the nose, in the form of a local topical variety. Chemical cauterization is generally the most effective when bleeding is obviously occurring from the front-most section of the nose.

In other more complicated instances, it may required to use a nasal packing in an effort to stop the bleeding. A nasal packing serves to apply pressure directly within the nostril, which is supposed to promote clotting and control the blood. Several different kinds of nasal packing exist, such as balloon nasal packs, petroleum gauze and synthetic sponge packs, the latter of which will act like an actual sponge, expanding with moisture. The doctor will decide the best nasal packing to use with each case.

The majority of those who require a nasal packing will be able to go home with the packing still in the nose. Antibiotics may be prescribed in order to prevent a sinus infection from occurring, because the packing directly blocks the sinus’ drainage pathways. The packing typically remains in the nostril for two or three full days.

When a posterior nosebleed does not cease bleeding on its own, it will require medical intervention by way of hospital admission; this is because a posterior nosebleed has the potential to be very serious. In an effort to maintain control over the nosebleed, the doctor will employ a posterior nasal packing. Though there are several kinds of packing available for usage, most likely a balloon pack will be used.

Posterior nasal packing differs from its anterior counterpart in that having one in the nose is far less comfortable, frequently requiring pain medications and sedatives to make it feel better. There are other complications that may occur with a posterior nasal pack, as well, such as blockage of breathing passages and infection. For this reason, it is required to stay at the hospital and be closely monitored.

Like anterior nasal packing, the posterior counterpart is left in for two to three full days. If this fails to stop the bleeding or control it, there may be some surgical procedures or arterial embolization required.

There are several different ways to prevent a nose from bleeding again after treating it. Once the bleeding has stopped

Avoid, whenever such prevention is possible, allowing the nose to undergo any more irritation, such as straining, nose blowing or sneezing for a full 24 hours.

Ice packs will not help.

Avoid further exposure to dry air, such as during the winter in a heated home, because this can further contribute to the problem. Try getting a vaporizer or a humidifier to add moisture to the air, preventing the nose from drying out and preventing further bleeding. If such tools are not available, try to fill up a pan with water and leave it by a radiator or a similar heat source, which will cause the water to evaporate, which will effectively introduce moisture to the air.

For a more actionable plan

After getting home, rest for awhile with the head elevated between 30 and 45 degrees.
Refrain from blowing the nose or putting any foreign substance into it. In the event that sneezing cannot be prevented, open the mouth so that the air does not attempt to escape the nose but it will escape through the mouth instead.

Use a stool softener rather than straining during a bowel movement, such as Colace. Refrain from bending down or straining to lift any kind of heavy item.

To build upon the last tip, ensure the head is always at a higher level than that of the heart and do not smoke. Stay away from hot liquids for at least a full 24 hours, remaining on a cool, soft diet. Refrain from taking any medications that result in blood thinning, such as ibuprofen, warfarin, clopidogrel bisulfate or aspirin.

In the event that they are prescribed, it is vital to contact the physician with regards to needing to stop taking these medicines. The doctor may have some recommendations with regards to lubricating ointment to help treat the nose.

When Nasal Packs are Used

The nasal packing will usually be inserted into both nostrils, and they are typically made of Merocel, which is a material that functions like a sponge. This is used in order to compress the area and requires a follow-up appointment to remove them. Do not drive to the doctor and have someone else drive before and after the nasal packs are to be removed. It is likely that pain medications and antibiotics will be prescribed during this time.

The nose may drain a blood-tinged material. When this occurs, folded gauze can be taped beneath the nose, typically referred to as a mustache dressing. Additionally, the doctor may permit the cleansing of the nostrils at home with Q-tips that are soaked in hydrogen peroxide. Lastly, it is recommended to reconsider the methods of prevention as detailed above so that bleeding does not recur.