Obesity is a disease that is overwhelming the American population. Obesity is defined as an excess proportion of body fat to size, more particularly a weight more that twenty percent above the normal weight. Another measure to determine obesity is the body mass index, or BMI. BMI is calculated by multiplying your weight in pounds by 705 and then dividing by your height in inches twice. A healthy BMI is 18.5-24.9. One that is 25-29.9 indicates that you are overweight and a BMI of over 30 is considered to be obese.

Generally, obesity is caused by eating more calories than you burn. In most cases, this is a result of purely eating too much while not exercising enough. While many people believe this to be the only cause, there are many other causes for obesity. The following are causes of obesity in addition to over eating:

When your body ages, your metabolism slows down. This decline means that your body no longer needs as many calories to stay healthy. If you continue to eat the same amount of calories at age 30 as you did as a teenager, weight gain will be inevitable. The best way to avoid this is to lower your caloric intake and remain active throughout your life.

Females, on average, have slower metabolic rates than men do. Because of this, women tend to be more overweight than men do. In addition to this, menopause causes an additional decrease of metabolism. Men have a faster metabolism thus require far more calories than women do. Because of this, obesity in men is much rarer than in women but it does happen especially with age as the man’s metabolism begins to slow.

Believe it or not, many studied have shown that obesity is genetic. Obesity and thinness both tend to run in families. Studies on adopted children have provided evidence for this theory. When studied, children who were adopted tended to have a closer weight to their biological parents than there adoptive parent. Even more shocking, the environment tended to not alter the trend. On average, if your biological mother is obese there is a 75 percent chance that you yourself will be obese as well. This same statistic applies to mothers who are thin as well. However, you can prevent becoming obese even if you are genetically determined to become so.

While genes are indeed a heavy influence on obesity, environment plays an important role as well. Environmental factors include several things. The most important of these is lifestyle behaviors such as how much you eat and your activity level. Also, busy lifestyles can lead to weight gain as well. It is much harder to prepare a healthy meal when there is no time in the day. In these situations, simply avoiding fast food can help significantly in maintaining weight.

The amount of physical activity an individual receives is a major factor in obesity. Physical activities not only burn calories but also decrease appetite, especially in obese individuals. In addition to this, activities also make the body burn fat as an energy source. The majority of obesity in the world today is a result of decreases physical activity.

Psychological factors greatly influence ones eating habits and weight gain. Negative emotions such as being sad or boredom tend to cause people to eat.

Many people who are obese feel that they cannot control how much they eat and feel helpless. In these cases, an individual often partakes in binge eating in which they eat large amounts with no control. 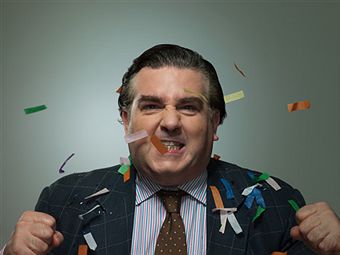 There are indeed several illnesses that can lead to obesity. One of the most common of these illnesses is hypothyroidism. This is a condition in which the thyroid does not properly secrete the hormones needed.

Thyroid hormone, the main secretion of the thyroid gland, regulates the metabolism.

When this hormone is not secreted at high enough levels, the metabolic rate slows greatly putting the individual at risk for obesity. Depression can also lead to obesity because of hormone imbalances as well.

There are certain medications that can lead to obesity. Steroids very commonly cause weight gain among individuals. In addition to steroids, antidepressants seem to have that effect as well.

There are many factors that do indeed place you at a higher risk for becoming obese. As mentioned earlier, genetics can lead to obesity. As well as heredity, gender plays an important role as well. Females are at a much higher risk for developing this disease due to the slower metabolic rate. People who work varied work shifts are also at a higher risk for developing obesity. This is because of the constant change in schedule of eating times as well as the lack of time to prepare a healthy meal. Smokers who are trying to quit are also at a high risk.

While weaning off of the nicotine, the body may crave food in order to replace the drug. You can help to prevent this by lowering your caloric intake during this process. Also, your age greatly affects your weight. People that fall in the age range of 20 to 55 are at the greatest risk for obesity. Your race or ethnic group also plays into the risk factors associated with this illness. The White population has the lowest risk followed by African Americans and Hispanics having the greatest risk.

There are several measurements used to diagnose obesity. One of the most common measurements is the body mass index. As mentioned earlier, this is a measurement that tells you your proportion of body fat to your height. A BMI above 30 indicates obesity In addition to Body mass index (BMI) this measurement, waist circumference is another measurement used in diagnosis.

This measurement is taken in inches. In this test, you simply measure how many inches your waist line is. In females, the waist circumference should be less than 35 inches and males should be less than 40 inches. Any measurement above these values may indicate obesity. If either of these values are above normal, you should visit a doctor to have things further investigated.

It is much easier to prevent the onset of obesity than it is to loose weight after words. The best preventative measure for this illness is to develop healthy eating habits as well as follow a daily exercise routine. Healthy eating habits are best developed by first being knowledgeable about healthy foods and also by keeping a food diary.

Keeping a food dairy will help you to see everything that you have eaten throughout the day and see what you need to modify. Exercise routines do not have to be a vigorous trip to the gym. Rather, participating in a daily walking routine can prove to be sufficient. The following are a few tips to help maintain a healthy lifestyle:

There are many different routes that you can take to treat obesity. The least evasive way is to exercise and begin a strict diet. The usual recommendation for exercise is 30 minutes a day. The generic diet prescribed is a low fat, high complex carbs (not simple), and high fiber diet. When taking this route for treatment, social support from your friends and family is key. Another route for treatment is taking medication. Because of the severe side effects of the medications used for this purpose, generally they are only prescribed when life style modifications fail to be successful.

One of the medications used is Phentermine. This particular medication is only allowed for short term use. Increased blood pressure is a side effect of this medication and it should be used with caution and with medical monitoring. Orlistat is another medication prescribed for this purpose. The medicine works by blocking the absorption of dietary fat. Unlike Phentermine, this drug can be used for a longer duration. The side effects of using this medicine include greasy stools and fat-soluble vitamins will need to be supplemented in your diet.

As a last resort treatment, surgery can be done to help cure obesity. A gastric bypass is the most common operation done for this purpose. What this procedure does is reduce the size of the stomach and allow food to bypass part of the small intestine. By reducing the size of the stomach, you feel fuller much quicker than if it were at its original size. This alone reduces the number of calories that you intake in your meals. In addition to this, by bypassing part of the small intestines, the amount of calories absorbed is decreased as well. This method of treatment is by far the most successful. While is it indeed the most successful, this procedure should be done at an institution that specializes in this treatment.

There are many risks associated with gastric by-pass surgery and special care is needed to observe for those risks. These risks include infection of the incision, leakage from the bypass created, and pulmonary embolism. Many people also experience gallstones or some other nutritional deficiency such as anemia.

Along with the risks associated, many modifications are required in the way that you eat after surgery. Only ounces of food can be ingested at a time because of the size of the stomach. Also, food must be chewed very thoroughly or pain can result. In addition to this, you are not allowed to drink any fluids 30 minutes before you eat, during your meal, and 30 minutes after you eat. This is because there is no longer enough room to hold both solid foods and liquids. Foods such as simple sugars may need to be avoided because with the bypass, they pass though to quickly causing complications such as diarrhea and increased heart rate.