Dark circles are obvious blemishes that appear above and, particularly, beneath a person’s eyes. Dark circles do not cause any pain and are rarely a sign of a serious medical problem. However, they can be a source of major annoyance and can hurt a person’s self confidence. Many people with the condition complain that the dark circles make them look 10 years older.

Dark circles affect thousands of people of all ages and genders. In fact, more people suffer from dark circles than from any other skin condition except acne.

Dark circles are often called “eye bags”. Another, rather unfortunate, name for the condition is “raccoon attack”.

When a person has dark circles, the skin around his or her eyes will appear to be a darker color than that of the rest of his or her face. The color can be anything from a light blue to a dark black, hence the nickname “raccoon attack”. It is very rare that a dark circle will appear around one eye but not around the other. Dark circles can be chronic or can come and go like any other skin condition.

Dark circles can be hereditary. Smoking and alcohol consumption can also increase a person’s chance of developing them. Contrary to popular belief, dark circles are not caused by lack of sleep. Lack of sleep can cause eyelids to become puffy, thereby causing shadows that can look like dark circles. 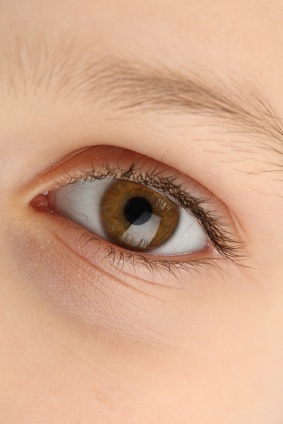 Age can cause skin to lose its elasticity. When this affects the skin around the eyes, the blood vessels will naturally begin to show.

Almost all common allergies, particularly those that cause nasal congestion, can cause the blood vessels in the sinuses to become dilated. Dark circles resulting from this cause should disappear the moment the allergies are relieved.

Loss of fat and protein, resulting from either age or weight loss, can cause the skin beneath the eyes to become more transparent, thereby showing the blood vessels and causing dark circles.

A person with atopic dermatitis, better known as eczema, can also develop dark circles if the skin condition affects the person’s eyes.

Some people develop dark circles because of a condition called hyperpigmentation. This condition occurs when the skin’s levels of melanin, a compound that controls pigmentation, are increased drastically, thereby causing the skin to darken. Hyperpigmentation is most often caused by skin injuries. These injuries can be caused by serious acne, sun damage, or improperly done cosmetic surgery. Although there are many treatment options to help control hyperpigmentation, the condition is irreversible and a person suffering from it must avoid exposure to sunlight.

Dark circles can be hidden by common cosmetics such as eye shadow and foundation powder. However, there are many treatment options, most of them very simple and cost effective, that can temporarily relieve the condition.

Any form of cold compress can help the blood vessels around the eyes contract, thereby eliminating the dark blemishes. Cold compresses only offer temporary relief; however, they are often more than sufficient, particularly because they are so easy to apply. A person with chronic dark circles can very easily add this treatment to his or her daily facial routine.

A cold compress can be made by simply soaking a washcloth in ice water; soothing herbs can be added to the water if desired. Traditional compresses include cold wet tea bags and raw cucumber slices. Whatever form of compress is used, it should be applied to the eyes for at least 15 minutes, once or twice a day. Cold compresses can cause mild skin irritation, particularly if the person is allergic to an ingredient in the compress.

Vitamin K is highly recommended for those with hyperpigmentation. The vitamin can help lighten darkened skin and also helps skin recover from any form of cosmetic surgery.

Vitamin K can be taken orally; the dosage should be discussed between the person and his or her medical doctor. Also, when treating dark circles and/or hyperpigmentation, it is advisable to apply vitamin K topically. It is recommended that a 5% vitamin K cream be used.

This vitamin can cause poisoning, but only if it is taken in very large quantities over a long period of time. Vitamin K rarely causes adverse effects. In high does it may interfere with some medications through the blood. Patients who have life-threatening bleeding are sometimes given Vitamin K.

Since vitamin E treats nearly every skin problem, it is no surprise that it also treats dark circles. Topically applied vitamin E, in either oil or cream form, can help restore firmness to skin. Also, it can practically cure the effects of atopic dermatitis.

Vitamin E is also considered the “anti-aging” vitamin. Therefore, it can help restore tissue and keep aging skin from sagging.

The recommended dose is about 400 IU per day. Pure vitamin E oil can also be purchased and applied directly to the skin or taken orally. Vitamin E should not cause any adverse effects.

Vitamin C can help strengthen and/or control blood vessels. Either take 60 to 500 mg a day, or eat foods rich in vitamin C, such as citrus. Vitamin C can cause intestinal problems, such as nausea or diarrhea, but only if it is taken in large doses and on an empty stomach.

Omega-3 is a fatty acid that is naturally present in eggs, fish, and several other foods. Omega-3 is good for the eyes and can also help blood vessels. Although it should not cause any adverse effects, a medical professional should always be consulted before the supplement is taken.

When treating dark circles, a person should either eat an omega-3 rich diet or daily take an omega-3 dietary supplement. Omega-3 is available in several forms. Fish oil soft gels are the most popular.

The recommended dosage of omega-3 is approximately 600 to 1200 mg per day.

Olay carries many products, including eye creams and serums, that can help lighten dark circles. Look particularly for anti-aging creams or for rejuvenating eye serums; just be sure the product is safe for use around the eyes. The typical cost is anywhere from $5 to $20 for five ounces of product. Olay products usually do not have any side effects except, perhaps, mild skin irritation that will cease the moment use of the product is stopped.

There are several homeopathic remedies that can help dilated blood vessels contract: apis mellifica, arsenicum, and kali carbonicum are the names of a few. It should be remembered, however, that homeopathic remedies are not “magic cures”. If a remedy is found to be effective, it must be taken daily, just like a pharmaceutical. If a homeopathic remedy is taken under the guidance of a qualified professional, it should not cause any adverse effects.

Diurex can help relieve fluid retention and can make blood vessels contract. Diurex is available over-the-counter. The drug is usually considered safe although it can increase the risk of dehydration. Diurex usually costs about $20 for 25 pills.

Midol is typically used by women during their menstrual cycles. However, like Diurex, Midol can relieve fluid retention and can mildly lighten dark circles. Midol is available over-the-counter. If dosage instructions are followed exactly, the drug should not cause any adverse affects. Although Midol can be taken by both men and women, it should not be taken by men with enlarged prostates. Midol usually costs about $20 for 40 pills and there are also many cheaper generic brands that are just as effective.

Prescriptions from a Dermatologist

Dermatologists can prescribe other creams and drugs that will lighten dark circles. However, they will very likely cost more than over-the-counter pharmaceuticals. Also, be sure to ask the dermatologist about any possible side effects.

Because dark circles do not cause sensory impairment or any other health problems, surgery should be considered a last resort. Not only are eye surgeries extremely expensive, but they are also very risky.

Fat grafting, also known as fat transfer surgery, can almost completely eliminate dark circles. The outpatient procedure takes fat, from either a different area of the person’s body or from a donor, and transfers it to the area that is in need. The procedure is quite safe and there are very few possible side effects. There will, naturally, be some bruising and the patient may need to take painkillers for a few weeks. However, these symptoms should be temporary. When treating dark circles, fat transfers usually cost about $1,500 per eye.

Blepharoplasty is a cosmetic procedure that is often referred to as “eye bag removal”. The procedure removes excess muscle, fat, and skin from around the eyes. Although the procedure is, for the most part, effective, it also carries with it many risks: blepharoplasty can cause infections, skin injuries, and haematoma (a hemorrhage or blood clot behind the eyeball). Work on both eyes can cost as much as $4,000.

Since Botox effectively tightens skin, thus removing wrinkles, it can also remove dark circles. Botox usually costs about $325 per injection. The number of injections needed depends on the severity of the condition as well as on the person’s personal preferences.

However, Botox has many possible side effects: if the procedure is done improperly or if the person does not react well to the chemicals, Botox can have a reverse effect and can cause the skin to droop and sag even more. There will be pain and bruising around the injection site for several weeks; also, many people experience flu-like symptoms for about a week after receiving an injection. A person who has Botox injected around his or her eyes may begin to have trouble blinking.