Historically, moles have been thought of as hideous growths that donned the faces of witches and other undesirable characters. Celebrities such as Cindy Crawford, Madonna, and Marilyn Monroe were each photographed with facial moles during their careers. Subsequently, moles became known as beauty marks. Scientifically, moles do indicate a lower incidence of age-related diseases. Experts speculate that the more moles a person possesses, the lower the risk for age-related diseases.

Moles often appear as raised or flat round spots on the surface or the subdermal layer of the skin. Moles that form on a superficial layer of skin are comprised of melanocytes. Melanocytes are melanin producing cells that are located in the bottom layer of the skin’s epidermis. Melanin refers to the pigment that determines the color of the skin.

Moles are present on any portion of the body. Moles may either be small or large. The range of mole colors varies. Moles present on the body may be black, brown, red, pink, or the natural color of the individual’s skin. Most moles however, are either black or brown. Moles may appear as a cluster or as one single unit. The average person may have 50 moles or more on the body. 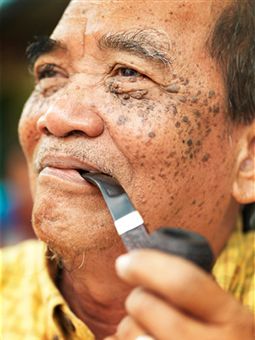 One in every 100 infants is born with a mole present somewhere on the body. The American Academy of Dermatology states that the majority of moles develop within the first 2 decades of a person’s life. Moles that are acquired may be a benign neoplasm.

Congenital moles are considered to be a malformation or hematoma. These types of moles may develop into melanoma at a later stage. Moles do occur on the palms of the hand and the bottom of the foot. Moles located on the underside of the foot are more common in the Asian population.

Some malignant melanomas are more likely to develop on the leg. As a general rule, if hair is growing from the mole, then it is not malignant. It is debated whether moles that are constantly aggravated will result in melanoma. Most experts respond, “No” to this belief. However, some suggest that a mole receiving irritation from an outside source may undergo malignant changes.

Most individuals prefer to have moles removed for cosmetic reasons. This group is typically self-conscious about the moles and would feel more confident socially, if they were removed. Others worry that moles will develop into malignant cancer and remove the moles as a precautionary measure. Those people, whose moles are found malignant, must remove them before cancer spreads into the body.

Moles take on a variety of shapes and colors. Generally, symptoms are not associated with a mole unless the area develops into malignant cancer. However, bleeding and itching may occur in some instances. Some of the typical lesion locations, shapes and colors are described below:

These lesions are typically flat and black or brown in color. The lesion is located between the epithelium and the dermis.

Compound nevus describes beauty marks. Beauty marks are slightly raised and are brown or black in color. The lesion is a mixture of skin layers.

Intradermal nevus cells may be primarily found in the dermis layer of the skin. Most are these cells are raised and flesh colored.

Dysplastic nevi may be flat or raised. The nevi are characterized by irregular borders and coloration. Because of the irregularity, they often resemble melanoma. People with dysplastic nevi should consider being tested to determine if the lesion is cancerous. The National Cancer Institute states that dysplastic nevi are more likely to develop into a malignant growth.

The melanocytes in this type of mole are blue in color. The cells often form a spindle shape in the deeper layer of the dermis, while the covering layer of skin remains normal.

These types of nevi are typically present in the intradermal layer of a child’s skin. The lesions are raised and reddish in color. This type of lesion may also appear on the leg of a woman.

This term refers to a a melanocytic nevus that is not present at birth. The lesion may consist of junctional, compound or intradermal nevus.

These lesions are normally large and hairy. They are also black to brown. Ten to fifteen percent of these lesions will develop into malignant cancer.

These lesions may actually be found in the mouth or around the genital areas. If the lesion is located in the mouth, it is typically found on the upper hard portion of the palate.

These lesions are typically present from birth. The flat, brown lesions are often located on the face or shoulder of the person.

Asian babies often have these large, blue colored lesions on their backs.

Lesions may grow back after being removed surgically. The recurring growth is often caused by melanocytes that remain after the surgery. These scars are often indistinguishable from malignant cancer cells. Therefore, a problem may occur if they are not completely removed.

The most common cause of a mole results from hyperpigmentation of the skin. Genes may also play a significant role in an individual’s development of moles, since most are present from birth. Dysplastic nevi and “atypical mole syndrome” may also be the cause of mole development.

Both of these conditions are heredity. People afflicted with the condition may have 100 or more moles. Some of the moles associated with this condition may be large or atypical. Moles associated with dysplastic nevi are more likely to develop into a melanoma. People who have more than 50 normal moles are at a greater risk of developing a cancerous growth. A majority of cancerous growths do not form from pre-existing moles, but generally form a new mole on a superficial layer of skin.

Sunlight is a major component in the development of cancerous skin growths. Overexposure to Ultra-Violet (UV) rays and excessive sunlight may cause the formation of a mole. Experts have not proven this phenomenon conclusively. However, there are strong indicators that suggest that this is true. The indicators of this phenomenon include the following observations:

Some experts suggest that moles are an indicator of a potassium deficiency. Experts recommend eating foods containing potassium or taking a potassium supplement. Bananas and apple cider vinegar are high in potassium. Potassium is beneficial for many reasons and can be taken as a supplement in tablet form.

There are several risk factors that are under investigation by scientists. However, the data is inconclusive. There are strong inclinations to support each of these claims. Several potential risk factors are listed below:

Dermatologists will often employ the ABCDE guideline in order to make a diagnosis with the physical, trained eye. Alternatively, a dermatoscopy may be used as well. A dermatoscopy is a magnifying tool used to examine the lesion for cancerous cells. 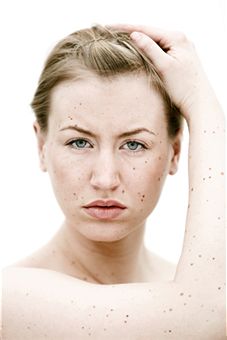 The ABCDE guideline is a mnemonic for the following evaluation tool:

Seborrheic keratosis is often mistakenly diagnosed as a melanoma cancer. The benign growth originates in the keratinocytes.

Select an experienced doctor who can distinguish between the two types during examination. Moles that have jagged edges, itch, bleed, develop inflammation or become larger than a pencil eraser should be examined by a physician immediately.

If the lesion is benign, such as seborrheic keratosis, then the doctor may recommend the following to remove the lesion:

If a physician suspects the lesion is cancerous, a biopsy must be performed prior to removal to determine the best method. Removal of cancerous moles may be removed by excisional biopsy, laser, electrocautery, surgery or shaving. The shaved site will leave a red mark that will return to the skin’s normal color in approximately 2 weeks. The process should leave little to no scarring. Most insurance companies do not cover the removal of benign moles.

Some of the popular home remedies are listed below:

Many mole removal products are available online or over-the-counter. Most possess pharmaceutical strength, but they are 100 percent natural remedies. Some of these products originate in other countries, such as Madagascar. The moles are eliminated in days with some of these products. Some are made of essential oils and have anti-melanoma properties. When the products are applied, they absorb into the skin and penetrate the cell membrane to eliminate the mole completely. Many can be found online for reasonable prices.

Consult a plastic surgeon or a skilled physician to use medical lasers to remove flat moles from the skin. This process may also work on some raised moles as well. Laser treatments only cauterize the surface layers of skin. Most moles penetrate beneath the surface layer. Therefore, the laser may not remove all of the melanocyte cells associated with the lesions.

This becomes a problem if the mole is malignant. If the mole’s cells are cancerous, it is imperative to remove each of the cells. Otherwise, recurring nevus may occur. Surgeries are recommended in these instances. Mole surgery actually penetrates deep into the skin via an incision. Sutures are necessary after surgeries. In contrast, laser mole removal only forms a scab briefly and heals within 7 days.

As mentioned previously, mole surgery is the only way to ensure that all cancer cells are removed from the area. To prepare for mole surgery, liquid nitrogen is typically applied to the raised mole. The physician will shave the mole from the body with a scalpel. The physician may also cauterize the area to avoid excessive bleeding.

Cauterization is performed in instances where the incision is difficult to close with stitches. Liquid nitrogen is not recommended for melanoma or cancerous moles. After surgery, the area will take some time to heal. In most cases, the healing process takes two weeks. While the area is healing, change the bandages often. Avoid exposure to water for the two weeks. Also, avoid exposure to sunlight.

Electrocautery actually burns the mole from the skin. A mild anesthetic is applied locally before the procedure. In most cases, patients must undergo 1 to 3 treatments to completely remove the mole. Since the electrical currents only reach the superficial layers of skin, scarring is less likely to occur.

Potential Side Effects and Risks

The risks may include scarring and recurrent growth. Recurrent growth may occur if all of the cancerous cells are not removed properly. Redness and inflammation in the area may also occur. As with any surgery, there is a risk of infection in the open wound. Some individuals may even experience allergic reactions to the anesthetic or nerve damage.

Laser removal risks may include a scab, possible scarring, infection, and recurrent growth. Home remedy risks are few. Some individuals may experience an allergic reaction to one of the natural agents. Patients should be aware of any food allergies before trying a home remedy.