Your skin is an essential part of your body. It performs a high number of functions and these are vital to overall health. Among the important jobs your skin does are: protection from pathogens and elements; provision of important sensory information pertaining to touch, heat, cold, etc.; prevention of bodily fluid loss through evaporation; absorption; and a barrier of water resistance. Taking care of your skin is one of the best things you can do to maintain overall health, as doctors have found that the majority of skin diseases are caused by nutrient imbalances in the body. Dermatologists recommend a number of high quality skin care products to try and regulate these imbalances and provide your skin with all the necessary nutrients to maintain overall health.

One of the most well-known and common skin problems, and one that is not simply restricted to teenagers, as the generalization asserts. Acne (also known as pimples, and, more informally, zits) is caused by a lubricant known as sebum which is produced by oil glands in the skin. 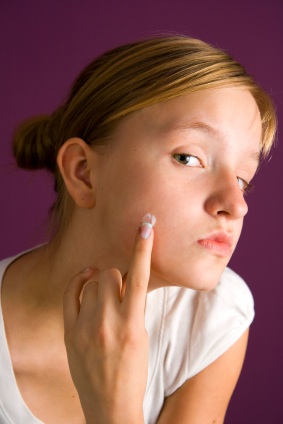 When the oil gland wall breaks, the sebum spills out and pools in the skin which causes redness and swelling in the form of acne. Sometimes, there is really nothing you can do about the acne, as it runs in families genetically. Contrary to popular belief, foods do not cause acne; in rare cases, certain foods, such as chocolate and nuts, can make acne slightly worse, but do not lead to it. Excess stress can also make acne more pronounced, as can cosmetics in women.

These skin imperfections, also known as lentigines, typically appear in people after age forty, and are simply a result of exposure to the sun. While harmless, they need to be monitored to see that they don’t get bigger than the surrounding sun spots. The only prevention is liberal usage of sunscreen, protective clothing, or no exposure to the sun.

Tinea pedis is a skin infection caused by a foot fungus. Because this fungus thrives on warm, moist conditions, it tends to be found more in the folds of the toes and may be worse during warmer weather. Everyone comes in contact with this fungus; why some people are more susceptible to developing tinea pedis is unknown. The other difficulty is that even when the rash is treated and appears to be gone, it may still be present and just lying low, only to come back again later. Skin on the foot appears red and, in serious cases, blisters can form.

Often found in babies and young children, eczema is an irritable, itchy rash often found on the hands. Like other skin diseases, it can go away and reappear without warning some time later. It is caused by an inherent defect in the skin which causes it to dry out faster than normal skin. It may run in families. Eczema can be aggravated by soaps, detergents and lotions as well.

Since it is a skin defect, there is no permanent cure available. However, treatments are generally effective at controlling the swelling and itchiness. Vaseline and cortisone compounds rubbed into the skin are good at moisturizing and limiting eczema. Liberal use of cortisone does require medical follow-ups.

This is the common nomenclature for a condition known as urticaria. Hives are itchy red welts or small bumps that can last for only a few minutes or several hours. They can appear very suddenly and typically leave no trace when they are gone. 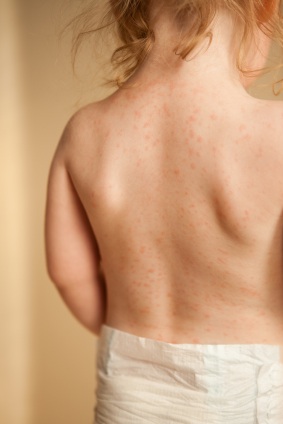 Hives are harmless unless they cause swelling of the throat, which can limit air intake and requires medical attention immediately. Some people get hives from medicine taken internally, such as penicillin. There have also been documented cases of people getting hives from eating food, with shellfish and strawberries being known examples.

Impetigo is a bacterial infection, most commonly found in children. Impetigo presents itself in round, crusting, often oozing spots that grow larger each day. It is commonly found on the hands and face. The bacteria that causes impetigo often appears without warning.

This is a disease caused by a tick, which attaches itself to the skin seeking a blood meal. During feeding, the tick injects spiral bacteria into the skin, which can cause the common, red, circular expanding rash that is found in many cases of Lyme disease. The spread of the bacteria throughout the body can lead to fever, flu-like symptoms, headaches and malaise. Joints can also become swollen and painful.

This is the most dangerous form of skin cancer. The reason for the danger inherent in melanoma is the fact that once it reaches a certain size, the cancer metastasizes and quickly spreads throughout the body. When it gets into the internal organs, it is then beyond treatment and can quickly lead to death. With the depletion of the ozone layer in recent years, it seems as if incidence of melanoma is on the rise, as more and more harmful ultraviolet light is present. Doctors have determined that the type of person seemingly most at risk for melanoma is a professional who works indoors and then is exposed to shorter bursts of sunlight on the weekends. The short bursts appear to be more likely to cause melanoma.

Everyone has moles, and it is a mutated mole that becomes a melanoma. To check and see if a mole might be becoming a melanoma, check the symmetry of the mole. If the mole is asymmetrical, if the border of the mole is irregular and not perfectly round, if there are many colors present and if the diameter if more than 1/4 of an inch, a doctor should be contacted.

Poison ivy and poison oak contain a resin which causes an allergic reaction, leading to extremely itchy skin. Direct contact with the plant is not necessary, as you can come in contact with the resin by touching clothing or an animal that has been exposed to it. Poison oak pollen can travel through the air. A few lucky individuals never develop the allergy to these plants, but most people will become susceptible to it at some point in their life.

Ring worm is the common name for tinea corporis, which is a fungal infection of the skin. Recognition of the infection is easy to the trained eye, as it characteristically produces skin lesions which tend to be clear in the middle with a rough, scaly border. These may be circular in shape, or, in more severe cases, produce a large patch. Ring worm is very contagious, and is often transmitted by pets. Contact with the animal or with a person infected will pass along the fungus.

Tinea corporis typically clears quickly with administration of an antifungal topical medicine. More severe cases may require ingestion of oral antifungal antibiotic. The most common problem is many people stop using the medication after their lesions disappear, and, oftentimes, a recurrence of the infection happens. There may still be fungi present microscopically under the skin, which can only be cleared up by following medicinal instructions to their completion. Having pets treated as well can lead to a better chance of avoiding future infections.

This is another infection; however, shingles is an infection of the nerves that is caused by the same virus as produces chicken-pox. Known scientifically as herpes zoster, shingles can pop up in adults who may have had chicken-pox many years prior and now the virus gets reactivated. The rash can often be confined to one side of the body, producing a red rash that can develop blisters. More severe cases can last a few weeks and leave scars afterward. Because the virus is transmitted through the nerves, inflammation occurs, and causes shingles to be a painful disease.

Probably the most common skin affliction, and yet one that is easily avoidable. Caused by uncovered exposure to the sun, sun burn can lead to red, inflamed skin that can blister if severe and even lead to a low grade fever. Eventually, lower levels of epidermis renew themselves and the affected area peels off. Continued exposure to sunlight can cause irreversible skin damage and increase the risk of melanoma.

While harmless, warts tend to be unseemly, which make them rather unpopular. Caused by a virus, warts often appear with a rough surface and dark specks may be seen. Known formally as verruca vulgaris, warts can appear almost anywhere on the body. Prevention is impossible, and the reason why some people get them much more frequently than others is not known. Warts do not develop into cancer; however, they can be contagious, so direct contact is not advised.

This list is a small sample of the diseases than can afflict the skin. With an organ of the size and scope of the skin, many conditions can occur. Taking care of the skin can prevent many problems; however, some people may just be genetically more predisposed to skin trouble. Knowledge of skin treatment is deep, however, and most conditions can be treated successfully.