Warts are caused by the human papillomavirus, known as HPV, which is a double-stranded DNA virus. HPV causes benign tumors of the epidermis, commonly referred to as warts. There are a large variety of warts that are caused by different sub-types of HPV. Cervical cancer and other wart-related cancers are also caused by HPV.

The Appearance of Warts

Typically, warts grow in cylindrical columns out of the skin. On thinner skin like the face, these columns do not fuse together and give a flat appearance. On thicker skin, the columns fuse and are packed tightly together causing the wart to be raised and giving the surface the typical mosaic pattern. Sometimes, black dots, which are blood vessels that have become thrombosed, or clotted, in the wart, can be seen. 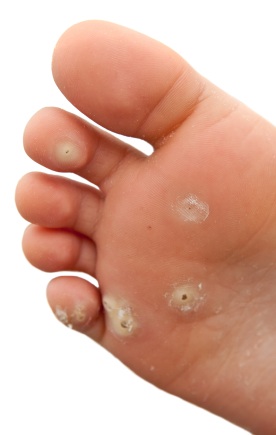 Who is Susceptible to Warts?

Though warts Mainly occur in children and young adults, warts can occur in people of all ages. Because warts are a result of a virus, they are spread by direct contact such are merely touching a wart. Warts normally will disappear over time, but there is no specific timeline for this.

Most warts will disappear from the skin within weeks or months; however, some warts may take years to subside. The immune system plays a large role in one’s susceptibility to warts. If the immune system is compromised due to illness, warts will last longer and increase in appearance. Those who have immune-related diseases such as lymphoma, AIDS, and those who are on chemotherapy often will have lost lasting warts.

An extensive variety range of wart have been identified by scientists that vary in shape, size, and site affected due to the type of HPV sub-type involved. These different wart varieties include: the common wart, the flat wart, filliform or digitate warts, plantar warts, mosaic warts, genital warts, and periungual warts. Common warts are typically found on the hands but can grow anywhere on the body.

They are raised in appearance with a rough surface. The flat wart is a small, flattened wart that is smooth in appearance.

It is flesh colored and can occur in large numbers. Flat warts most commonly occur on thin skin such as the face, neck, and hands. Filliform or digitate warts are most common on the face, near the eyelids and lips. They have a thread-like appearance. A Plantar wart is an extremely painful and hard lump that is typically found on the feet. Often there are multiple black specks, blood vessels, in the center of the plantar wart.

Typically diagnosing warts is made on appearance alone. Warts disturb the natural skin lines and are usually thickened in appearance. If the doctor suspects the wart to be a progression of skin cancer, a biopsy can be done. Many people treat cancerous legions, corns, calluses, and moles as warts, so be sure to see a doctor who can identify whether the spot is a wart.

Always keep sandals on when walking around pools, taking showers at the gym or dorm, and walking along the beach. HPV thrives in moist areas. The most effective way in preventing genital warts is to practice safe sex by using condoms, remaining abstinent, or avoiding sexual contact with those affected by genital warts.

Unfortunately, there is no one cure-all for warts. Treatment for warts on the body depend on the age of the individual in addition to the size, number, and location of the warts. Common warts do not necessarily need to be treated because they exhibit a high rate of spontaneous remission. If left untreated, however, the spread of common warts can occur.

There are a wide variety of treatment options for warts. Some opt to see a doctor and using physical or chemical treatment in removing the wart. Others rely on home remedies in treating warts.

The goal of medical treatments, with the exception of surgical procedures, is to cause the body to recognize the wart as a foreign body and use the immune system to destroy it. Popular medical treatments include destructive techniques and sallacylic treatment

Destructive techniques used methods such as lasers, cryotherapy, and surgical excision to remove warts. Using pulse dye lasers to remove warts is used primarily in cases where other treatments were proven ineffective. The laser techniques use light to burn away the wart tissue. The wound will be painful after laser removal for at least a few days. Usually there is no scarring associated with laser wart removal.

Often physicians will use cryotherapy, in which the wart is exposed to liquid nitrogen for one to four treatments, in the treatment of warts. These treatments are usually separated by one to two weeks. Cryotherapy can be painful so it is not recommended for young children. Often, cryotherapy leaves a large and painful blister at the site of the wart. Surgical excision uses scissors or a scalpel to remove the wart. Larger warts may require the use of a local anesthesia to numb the area. Destructive techniques often result in scarring, can be painful, and tend to be costly. 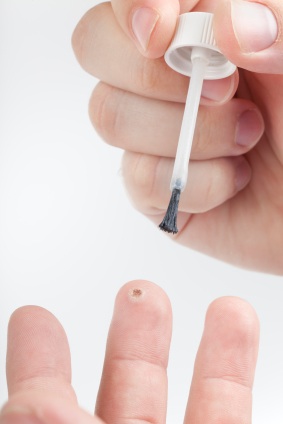 Sallacylic acid treatments can be purchased from the pharmacy or prescribed by a doctor. The acid must be placed on the wart 2 to 3 times a day, every day for a minimum of 3 weeks. Sallacylic acid works to soften the wart, breaking down the layers of the wart. Studies have found that sallacylic acid is most effective when applied to damp skin.

Most treatment of warts needs to be repeated, as the virus is very resilient can easily spread or reoccur.

There are many folk and home remedies that people have found useful in the treatment of warts. While some “old wives’ tales” such as “buying a wart off” have been dismissed, others have been proven to work.

Tea tree oil has been shown to suppress the virus and eliminate the appearance of warts. The tea tree is a bush that grows in Australian swamps and was originally used by aborigines as an antiseptic. Many scientific studies have shown tea tree oil’s ability to be used as an antimicrobial. It is important to note that tea tree oil is poisonous and cannot be swallowed.

Garlic is commonly used in cooking but has many health benefits. Used as a blood thinner and in many cultures as a way to prevent illness, garlic has many medicinal abilities. Many medical studies have shown garlic’s effectiveness in killing different kinds of bacteria and viruses, including HPV.

This has not been proven to happen, however, so you can remove the garlic after the physical wart is gone. Garlic contains a powerful antioxidant called allicin, which also works as an antimicrobial, killing bacteria, viruses, and fungi. There are no real side effects with using garlic; however, many find that body odor and bad breath may occur with using garlic as a remedy for wart removal.

Banana peels are one of the most common folk remedies for ridding the body of warts. Banana peels are a safe and inexpensive alternative to other over the counter medications sold at pharmacies.

First, eat a banana, as the potassium helps to boost the immune system. Then, cut a small piece of banana peel and placing the inside of the peel on the wart, tape down using medical tape. Lastly, be sure to change the banana peel daily. Many cultures view warts as a potassium deficiency. Bananas are rich in potassium so consuming a banana and placing the peel on the wart exposes the wart to potassium both on the inside and out. Bananas are considered safe to use as there are no side effects.

Many people use vitamin A and C to help boost the immune system to fight off the appearance of warts. Break open a liquid capsule of vitamin A and apply directly to the wart daily. Continue this until the wart is no longer visible. You can take vitamin A capsules as well, but remember that too much vitamin A can be toxic to the body. Crushing a vitamin C tablet, mixing it with water, and apply it directly to the wart has shown results in ridding the body of warts. The high acidity of vitamin C helps to destroy the HPV causing the wart.

Placing a small square of duct tape on the warts has shown to significantly reduce the appearance of warts. This remedy is most effective on the hands and fingers. Simply place a small piece of duct tape over the wart and leave for at least 6 days. Typically, smaller warts are gone in six days but it may take longer to rid the body of larger warts. After 6 days if the wart is not gone, soak the wart in warm water, dry it, and place another piece of duct tape for an additional 6 days. Repeat this process until the wart has been removed.