Vitamin C, also known as ascorbic acid, is a water soluble vitamin necessary for biological processes in humans and other animals. It is required for collagen production in blood vessels, cartilage, bones, and muscles. It also is critical for the prevention of bleeding capillaries, and the healing of wounds. It is generally produced internally by most animals, with the exception of humans, many kinds of primates, guinea pigs, and several types of birds and fish. Vitamin C deficiency, called scurvy, is preventable by adequate dietary consumption of the fresh fruits,vegetables and other foods that contain it.

Vitamin C is used in the body for the production of key enzymes, and as an anti-oxidant. It is involved in the development and repair of all tissues in the human body. It is also important for the creation of the neurotransmitter norepinephrine, which helps to control uses of blood flow and glucose release. Neurotransmitters regulate brain function and mood.

As an electron donor, vitamin C provides essential energy transfer for synthesis of the enzymes it affects. The enzymes it provides elections for include those necessary for making collagen. Skin, blood vessels, scar tissue and ligaments all require collagen to be produced. Collagen is part of the process in the healing of wounds. Vitamin C is also used in the enzyme for carnitine, which transports fatty acids for breakdown into metabolic energy.

Working as an anti-oxidant, vitamin C can protect the critical molecules of DNA, RNA, proteins, lipids, and carbohydrates against the damage of free-radicals and reactive oxygen species. 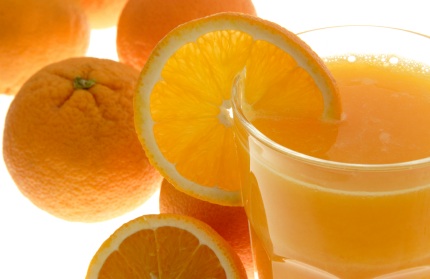 These are the side effects of normal body functions that happen when highly reactive oxidant chemicals result in undesired modifications to molecules and also from the exposure of the body to toxic pollutants.

It is also thought, based on a study of cigarette smokers, that vitamin C can help bring back oxidized forms of other vitamins such as vitamin E to their original state.

The free radicals that vitamin C protects against are responsible for cancer, heart disease, and arthritis.

Other organizations, such as the Linus Pauling Institute, recommend 400 milligrams a day. For reference, one cup of orange juice is about 97 milligrams, a cup of cooked broccoli is 74 milligrams, and a cup of tomato juice is 45 milligrams.

Nine servings of fruits and vegetables are recommended daily by the American Dietetic Association, to get the healthy amount of vitamin C as well as other necessary required vitamins, minerals, and nutrients. Foods with the highest amount of vitamin C are citrus, green peppers, broccoli, potatoes (white and sweet), strawberries and tomatoes.

Other sources are melons and fruit like cantaloupe, papaya, mango,pineapple and watermelon. Other then strawberries, berries that have vitamin C are blueberries and raspberries. Vegetables such cauliflower, cabbage, winter squash, and brussel sprouts also provide vitamin C.

Vitamin C is available as a supplement in many forms – tablets, capsules, drink mix, and powers, as ascorbic acid or sodium ascorbate. A supplement can be used to help insure the required daily amount is being consumed. But, it is important to note that many benefits of vitamin C that are gained from fruits and vegetables (beyond the amount required to prevent scurvy) may also be the result of other minerals and nutrients those foods contain, so it is still necessary to maintain a healthy balanced diet.

Deficiency Problems and Side Effects

Vitamin C is water soluble, meaning it dissolves in water and therefore making it necessary to maintain a constant dietary supply since the body cannot store it. Without enough of the vitamin, the body will deficiency problems leading up to scurvy.

Symptoms include increased weight due to a slower metabolism, bruising, dry skin and hair, and swollen joints. Teeth and gums would also be affected – with bleeding gums, gingivitis, and weak tooth enamel. Other signs of too little vitamin C are decreased ability to deal with infections, and slower rate of wound healing. Scurvy is the extreme form of these symptoms and usually only occurs now in rare cases in elderly adults and infants.

2,000 miligrams a day is the advised maximum daily upper limit for vitamin C consumption; all though 90-500 miligrams is the suggested range. Too much vitamin C can cause side effects – starting with indigestion, diarrhea, fatigue and headaches. It may also lead to disrupted sleep patterns, vomiting, flushing in the face, and skin rashes. In people who have iron overload disorders, vitamin C can cause iron poisoning as it increases the amount of iron absorbed.

Vitamin C is necessary everyday to prevent scurvy, as it is used in required biological processes in the human body – this is an accepted fact. However, there have been many prospective studies conducted to determine potential health benefits of vitamin C beyond this purpose, in relation to the prevention of disease. In these cases, higher amounts then the minimum recommended daily amount (90 milligrams) was taken, and the studies were conducted using large groups of people.

The various tests and studies for different factors are not considered conclusive, and sometimes contradict each other. In most cases, further research is necessary for accurate results.

Common Cold: Vitamin C has not been shown scientifically to prevent getting a cold, however it may lessen the chance of escalating existing symptoms. Additionally, it may actually reduce the chance of a cold developing for people living in extreme environments or conditions such as soldiers in the sub-arctic, or marathon runners by as much as 50 percent. Additional study is required for more results.

Skin Aging: As vitamin C has direct affect on cells including skin, there may be a link between higher vitamin intake and skin aging – with reduced skin dryness and wrinkling.

Cancer Prevention and Treatment: Studies of populations with diets of a high intake of fruits and vegetables that contain vitamin C show reduced risk of cancer -specifically mouth, stomach, lung, colon and esophagus. However, there is no evidence that it was the vitamin C that is directly responsible for this effect when instead it could be a result of a balanced healthy diet with many different vitamin rich foods that contain a variety of minerals and nutrients. There may be a benefit to taking vitamin C when under-going cancer treatment, but there is not enough evidence at this time.

Stress: Nutrients such as vitamin C are depleted in smokers, alcoholics, and the obese. For these individuals, it is important to consume enough vitamin C to protect the immune system. As an anti-oxidant, the vitamin may also help fight damage caused by smoking.

Heart Disease: There is no conclusive evidence that vitamin C helps to prevent heart attacks or lowers cholesterol. It may have an affect on plaque in arteries and artery openings, but there is not enough evidence either way to support this conclusion and it is not recommended for this purpose.

There has been general indirect awareness of vitamin C’s necessity for prevention of health problems since the beginning of human history. People understood that fresh fruits and vegetable helped counter-act certain ailments and symptoms, and was used routinely by various groups in local remedies. Scurvy itself was first described by Hippocrates around 400 BC, but scientific evidence for fresh citrus as its cure was not recorded until the 18th century.

Scurvy was particularly a problem for sailors without fresh food access on extended sea voyages. In 1614 the Surgeon General of the East India Company, John Woodall, published a handbook for general ship’s medicine in which he advocated fresh oranges, lemons, and limes as a cure for scurvy.

However, it was thought that the acidic qualities of fruit were what helped, and therefore he also recommended using Oil of Vitriol, also known as sulfuric acid. In the 17th century explorer Admiral Sir Richard Hawkins had his crew drink orange and lemon juice to prevent health issues during voyages. James Cook and crew circumnavigated the globe using sauerkraut to ward against scurvy in 1771.

In one of the first controlled and recorded scientific experiments, British Royal Navy ship’s surgeon James Lind proved that fresh citrus fruit cured and prevented scurvy. During the course of a voyage, Lind compared the health results of one group of sailors who were provided fresh oranges and lemons to the health of another group who consumed vinegar, cider, seawater, or sulfuric acid.

Lind’s work was slow to catch on as the use of juice instead of fresh fruit was advocated – boiled juice lost too much of the needed vitamin and was not as effective. His results were published in 1753, but it was not until 1795 that it was routine for all ships to stock fresh lemons and limes for the health of their crew. Limes were easy to obtain from the British West Indies, and this led to the slang nickname of “limey” for British sailors.

While it was known that “anti-scorbutic” foods such as oranges, lemons, limes, sauerkraut, cabbage, and raw meats prevented scurvy, there was not yet an understanding of vitamins as necessary nutrients until the the early 20th century. An animal based experiment conducted by Norwegian scientists in 1907 that observed scurvy for the first time in non humans was an important building block of Vitamin C research.

The first concept and the definition of vitamins was put forth by biochemist Casimir Funk in 1912, after his work with pigeons and beriberi, a disorder caused by vitamin B1 deficiency. The anti-scorbutic property of foods (soon to be known as vitamin C) described by the Norwegian research was considered to be one of Funk’s vitamins.

The specific chemical model of vitamin C was isolated and defined in 1932 by Hungarian Albert Szent-Györgyi as hexuronic acid (eventually known as ascorbic acid), for which he was awarded the 1937 Nobel Prize in Medicine. Shortly thereafter, vitamin C was able to be processed and synthesized using a fermentation sequence that is still in use today.

The Benefits of Vitamin C – WebMD