Galangal is a root in the rhizome family, which looks similar to ginger. Commonly used in traditional eastern medicine, galangal shares several healing properties with its cousin ginger. Galangal warms the body and aids in digestion. Also like ginger, galangal is a powerful anti-nausea remedy. Galangal is also a spice used frequently in East Asian cooking, from India to Thailand, offering a mildly spicy heat that is very fragrant and aromatic. 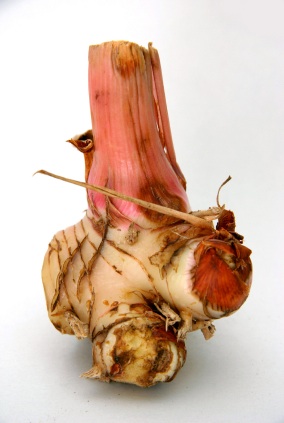 The origins of galangal can be traced back to China where it has been used for thousands of years in traditional Chinese medicine. It was not until the 800s AD that galangal found its way in to European hands through spice trade with the East. The famed St. Hildegard, a renowned healer and expert in herbal medicine recognized galangal’s powers and dubbed it the, “spice of life,” that was a cure-all for many diseases that ravaged Europe at the time. Although Europeans were very familiar with galangal’s medicinal properties, it was not until the late 19th century that galangal was biologically classified and given a standard taxonomic name. Galangal has been subdivided into two varieties — lesser galangal and greater galangal.

Greater galangal is milder in flavor but larger in size. Galangal is a member of the rhizome family of plants. Rhizomes are plants that have large, underground root systems that grow horizontally in the ground. Members of the rhizome family include ginger, turmeric, and galangal. The root of the galangal plant branches out in several directions, with each branch being between one and three inches long and three quarters to one inch in width. The branches are cylindrical in shape and white in color. The white color of the galangal root is broken up into segments by darker hued bands that are the result of old leaf growth along the surface of the root.

Like all rhizomes, only the root is used for medicinal purposes. The galangal plant does produce flowers, which may serve decorative purposes.

Galangal is a member of the rhizome family that includes the more familiar ginger and turmeric roots. Galangal originated in southeast Asia in China and in the islands of Indonesia. Still to this day, galangal is cultivated primarily in Asia, but with modern travel and freight options, is available worldwide in specialty markets and ethnic stores. Galangal is cultivated for both its culinary uses and its medicinal properties. Higher quality grade galangal is use primarily for traditional medicines, while lesser grade galangal is used for cooking. The optimum growing environment for a galangal plant is a shaded area that is out of direct sunlight.

Galangal also requires soil that drains well. Galangal is harvested after four to six years of growth. During harvest, which happens in late summer and autumn, galangal is dug up from the ground and thoroughly washed. It is then cut up into smaller pieces and sold fresh or dried. In traditional eastern medicine, galangal can be prepared either from fresh roots or in a dried form, depending on the recipe that is being made.

Galangal contains several important compounds that give it its healing properties. These include acrid resins, oils, kaempferid, galangin, alpinin, and galangol. Galangol, the oily component of the galangal rhizome, and acrid resin are the main components of the plant that produce its medicinal properties. Galangal has long been noted to have a warming effect on the body, but it also reduces gas in the digestion process. It also increases the secretion of gastric juices in the digestive track.

Galangal has been used for thousands of years in traditional eastern medicines. In China, traditional Chinese medicine holds that galangal has warming properties. In traditional Chinese medicine, the thought is that the body is influenced by yin and yang. Yin and Yang are two forces in the body that must be in balance to produce good health. Yin represents coolness, darkness, and water, while yang represents fire, warmth, and dryness. All foods can be subdivided into yin and yang foods. Here are how some common foods are classified:

According to traditional Chinese medicine, any imbalance in yin and yang can result in illness. For example, a person who has a cough is advised not to eat too many cool, yin foods, because they may exacerbate the cough. Instead, these individuals need to consume warming, yang foods to balance their systems. On the other hand, if someone has a heat rash or sunburn, they are advised to eat cooling, yin foods such as cucumbers and watermelon to bring down the inflammation.

Galangal root has yang properties and as such is thought to be warming. In traditional Chinese medicine, galangal is used to aid in digestion and to help with abdominal discomfort and indigestion. It is also a potent herb in fighting nausea like its cousin the ginger root. Galangal can also help to prevent or to stop vomiting. Chinese medicine also holds that galangal is effective in treating diarrhea, which is believe to be a result of too much cool foods being eaten.

Galangal has also been used extensively in traditional Indian medicine as well. Like the Chinese, traditional Indian herbalists recognize galangal’s ability to treat abdominal conditions. In addition to this property, traditional Indian medical practitioners believe that galangal possesses anti-inflammatory properties. It can also help to break up mucus and allow for a more productive cough in patients with upper respiratory infections. Because of its anti-inflammatory properties, Indian herbalists believe that galangal is an effective treatment for rheumatoid arthritis. 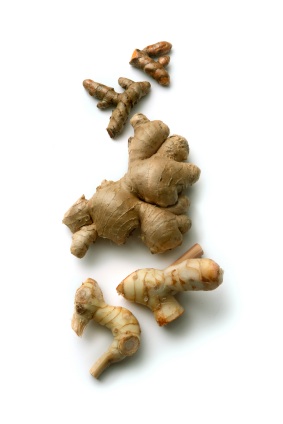 Western medicine has been slower to adopt galangal’s uses to cure stomach ailments. Galangal was introduced to Europeans in the 800s after trade had been established with Arabian spice merchants and doctors. Europeans quickly learned about galangal’s properties that could sooth abdominal problems, but also found that it could treat symptoms like gas and vomiting. Also, Europeans discovered that galangal could effectively treat mouth ailments such as open sores and bleeding gums.

As Europeans took to the seas in order to establish new trade routes and discover new territories, they discovered that galangal, like ginger, was a potent herb that could help with sea sickness and nausea. Research has also shown that galangal may have cancer fighting properties. In studies, galangal was shown to kill cancer cells as well as prevent non-cancerous cells from becoming malignant.

Galangal can be procured in fresh or dried form. Fresh galangal is primarily used in cooking, while dried galangal is used for traditional Eastern medicine. Galangal is also sold as extracts in health food and vitamin specialty stores. The usual dosage for galangal extract is one teaspoon, three times per day. Dried roots can be infused into hot water to make a tea. In order to prepare a galangal tea, one teaspoon of dried, ground galangal root is steeped in two cups of boiling water. The mixture must then sit to infuse for at least fifteen minutes. Galangal teas can be taken two to three times daily. Dried galangal can also be mixed with water or oil to make a soothing paste that can treat muscle pains.

Dried galangal ranges in price from relatively inexpensive at a dollar per ounce to tens of dollars an once depending on its grade. Galangal extracts can be purchased for approximately ten dollars per fluid ounce. As always, it is important to consult with a physician before undertaking any alternative medical treatment or beginning any herbal supplement. Ideal specimens of fresh galangal are pale white with little wrinkling.

Side effects from ingesting galangal root or extract is rare. In some cases, allergic reactions may occur. If symptoms of an allergic reaction such as itching, shortness of breath, or rash occur, it is important to discontinue use of galangal and consult a doctor immediately. Galangal may also cause hallucinations in very high doses.

Galangal is a well known root that has been used for thousands of years in traditional Chinese and Indian medicines. It has since made its way into the Western medical lexicon and its healing properties are just now being tapped by modern science. Galangal can ameliorate the symptoms of gastrointestinal distress and abdominal pain, while also providing relief from motion sickness and nausea. Best of all, galangal is relatively inexpensive and has no adverse side effects for most of the population.

As modern medicine advances, many researchers are finding merits in the old, tried and tested, natural cures like galangal. Indeed, it seems that the future of medicine is sure to combine elements from antiquity with modern techniques to provide new weapons against illness and disease.