Distribution is equal among men and women. While hemorrhoids can cause problems with people of any age, they are most prevalent in people from 45 – 65 years old. For people aged 50 and over, the incident rate rises to 50%.

Hemorrhoids are more prevalent in North America and Europe than anywhere else in the world, and there are some countries where they are virtually unknown. Several theories exist as to why this is, the two most prominent being diet and the use of sit-down commodes.

Types and Symptoms of Hemorrhoids 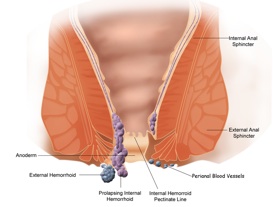 Additionally, the prolapsed rectum continues to excrete mucus as it normally does inside the body. This mucus combines with fecal matter and when exposed to the skin of the anus it causes extreme itching. Although the prolapsed rectum usually returns inside the body on its own, but if not, it can be pushed back in. However, if it is pushed back in, it usually falls out again when passing the next stool.

Doctors classify internal hemorrhoids into one of four degrees, based on their severity

External hemorrhoids, while they can be painful, are usually not as severe as internal hemorrhoids. They can be felt on the body as a bulge on the outside part of the anus. Usually, they do not interfere with the regular workings of the anus in the passing of stools, so there the stool rarely causes further inflammation.

External hemorrhoids, however, are very susceptible to thrombosis. If the hemorrhoid causes thrombosis it will turn into a hard, painful lump that usually must be treated by a medical professional. Even if the hemorrhoid heals spontaneously, it will often leave a skin tag on the anus. If the skin tag is large enough, it can continue to irritate the anus and pose difficulty in regular cleaning.

External and internal hemorrhoids are differentiated by the dentate line, where the outside anus converts from skin to internal lining. The hemorrhoids are made up of one or more arterial blood vessels and tissues, called cushions, in three separate positions: anterior, posterior, and one lateral. Pressure during bowel movements or from other sources weakens the cushions supporting the blood vessel until they are no longer able to sufficiently hold the vessel into place, so they bulge outward and into the anal canal or the skin of the anus. When inflammation occurs in one part of the hemorrhoid, it quickly spreads to the others.

Although no exact cause has been determined, several factors are associated with an increased risk in developing hemorrhoids or exacerbating already inflamed hemorrhoids

Several treatments exist in varying degrees from change of diet to surgery. Usually the most non-invasive forms of treatment are tried first, and then, if unsuccessful, treatment is scaled up. Sometimes several treatments can be used in conjunction.

General treatment includes lifestyle changes. A change in diet that includes more fiber will soften stool and reduce strain on the hemorrhoids. Sometimes, this is all that need be done. Following all the precautions and prevention tips may reduce hemorrhoid flare-ups to non-existence. 30 grams of fiber per day is recommended, along with plenty of water.

Several different over-the-counter medications are available without a prescription, although the advice of a doctor is always beneficial. Most of these medications are in the form of creams and suppositories. They may act to relieve pain and itching, but it has never been proven that they do anything to actually cure or treat the hemorrhoids. These creams, ointments, gels, and suppositories are applied with a finger or with a special device called a pile pipe.

Here are the available over-the-counter medications for hemorrhoids

Noninvasive treatments by a doctor are usually attempted before surgery is deemed necessary, except in cases of emergency involving thrombosis, gangrene, or serious infection. These treatments rely on scarring the hemorrhoid cushions, causing the swelling to go down and leading to self-reattachment.

Estimates are that less than 10% of hemorrhoid patients require surgery. Surgery is usually reserved for the most severe hemorrhoids or in emergencies.

Here are the common surgical treatments

Warm showers help to relieve pressure. This is recommended several times daily, if necessary. Soaps should not be used as they cause irritants that can further inflame hemorrhoids.

A sitz bath is common home remedy for hemorrhoids. This small tub fits over a regular toilet and is used to easily soak hemorrhoids in warm water. Application of a cold compress to the anus can relieve swelling and reduce pain and itching. The use of moist towelettes or wet naps instead of dry paper can help prevent irritation of hemorrhoids.