The kaffir lime is a citrus fruit which hails from Laos, Malaysia, Indonesia, and Thailand. The kaffir lime is popularly used in Southeast Asian cooking, such as Thai, Indonesian and Cambodian cuisine. However, it can also be grown throughout the world as a backyard shrub.

Names by Which the Kaffir Lime is Known

The kaffir lime is known by many names, including “kieffer lime” and “limau perut”. It is also sometimes referred to as “Thai limes” or “wild limes”. The leaves, zest and juice of the kaffir lime are all used in Southeast Asian cooking.

“Kaffir” comes from the German word “Kafer”, which means “bug”. This fruit is so named due to the fact that it slightly resembles an insect. Some controversy surrounds the use of the “kaffir” name for this fruit because this word is used by white Afrikaners as a pejorative for black people, meaning “infidel”. This usage derives from the Arabic word “kafir”, which was used by Portugese explorers to describe native Africans. This word is considered a derogatory term that remains in use today, and as such, alternative names such as Thai, Makrut, Asian, or Wild lime are preferred to ensure no one is offended.

The Kaffir Lime’s Appearance and How it Grows 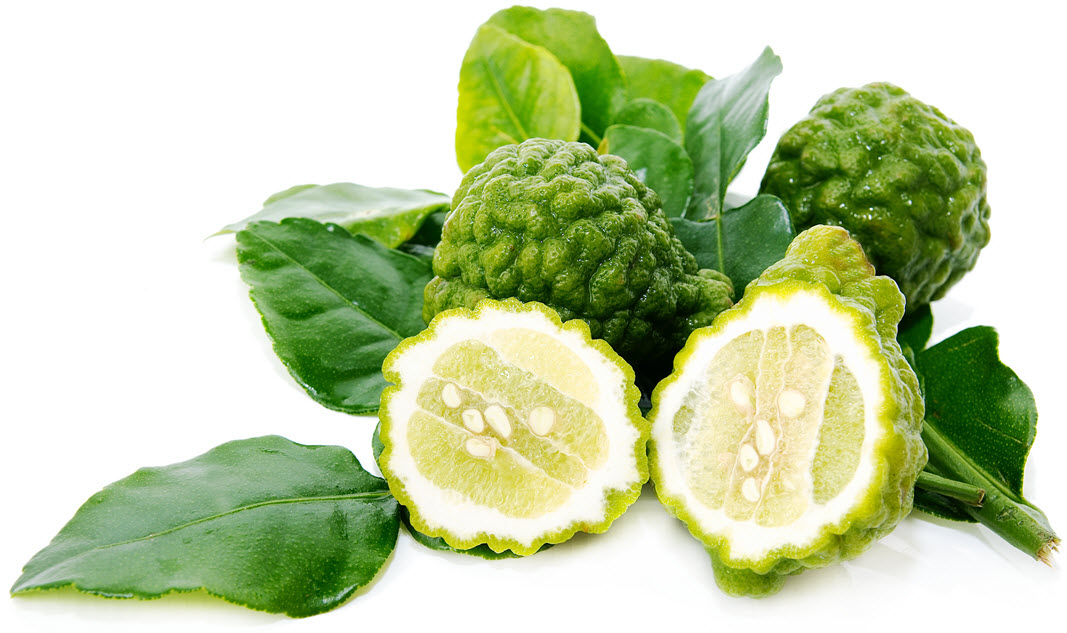 Traditional and Current Uses of the Kaffir Lime

There are many different ways that the kaffir lime is used in Southeast Asian cooking. The rind, or zest, is often used as a curry paste in Lao and Thai cooking. This usage provides an aromatic and astringent flavor.

In fact, this fruit is so commonly used to impart flavor in Thai cooking that if a dish calls for the use of citrus leaves, it can be assumed that it means kaffir lime leaves. Kaffir leaves are the only citrus fruit leaves that are used on a regular basis in a large number of Thai dishes.

The leaves exude an aromatic perfume and provide a striking and distinguishable flavor that is virtually impossible to substitute. The zest of this fruit also adds a piquant flavor to such mouth-watering favorites as fried fish cakes and “jungle soup”, or “gkaeng bpah”. The zest of the kaffir lime can also be found in creole cuisine. Additionally, the zest of this fruit is often used to add flavor to “arranged” rums that are made in Madagascar and the Reunion Island.

The zest or rind of the kaffir lime has such a strong flavor that it can overpower a dish’s other, more subtly flavored ingredients. As such, the rind is to be used sparingly. The rind should be grated or chopped very finely and then further reduced in a mortar along with the other paste ingredients until it become indistinguishable. This promises a recipe containing a proper balance of ingredients and flavors.

The whole kaffir lime leaves themselves, which have a somewhat hourglass shape creating the appearance of a double leaf and have a glossy sheen, are commonly used in Lao, Thai and Cambodian cuisine. The kaffir lime leaf contains two parts. There is a top leaflet which has a slight point at the tip. Attached to that is another leaflet at the bottom which is broader on the upper portion. The size of kaffir leaves can vary in size, from several inches long to less than an inch. The bigger the leaf, typically the darker its color. Because of the variations in size, it is often best to specify in recipes the number of leaves based upon size so that one does not use too much or too little.

The leaves of the kaffir lime are used in a wide variety of dishes, especially in Thai cooking. They are often used in soups, salads, curries, and stir-fried dishes. These leaves are also used in other cuisines, such as the cuisines of Laos, Cambodia and Indonesia. An example of Laotian cuisine in which these leaves are used include the Lao dish known as Tom Yum. They are also used in Cambodian cuisine as the paste base in Krueng. In Indonesian cooking, especially the cuisines in Bali and Java, the kaffir lime leaves are used in such dishes as Sayur Asam. The kaffir leaf is also commonly used in addition to the Indonesian bay leaf to cook chicken and fish dishes. The cuisines of Malaysia and Burma also make use of the kaffir lime leaf.

The kaffir lime leaf can be used whole or finely chopped. The best way to finely slice this leaf for use in cooking is to stack three or four that are similar in size and then slice them into very thin pieces using a sharp knife. Cutting diagonally is faster and easier. This task becomes easier with practice and you will enjoy the amazing aroma that rises from the leaves as you continue to cut them. The leaves can also be cut using scissors, but this practice is much slower and may not result in the fine slivers you get through chopping with a sharp knife.

It is important that the leaves be cut into fine slivers, as mincing or chopping can impact the flavor of the leaf, thus causing them to overwhelm the flavors of the other ingredients in the dish. Cutting large slivers can have the same result. As such, using fine slivers that are approximately one inch long are the preferred method for creating a balance of flavors. The kaffir lime leaf is very versatile and can be used either fresh or dried. It can also be frozen and stored for future use. The juice of the kaffir lime itself is regarded as generally far too acidic to use in cooking.

As such, this culture recommends using the lime juice to brush the teeth and gums. The fruit has essential oils which are incorporated into various ointments as well. The rind itself serves as an ingredient in many medicinal tonics which are believed to be beneficial for the blood. Just like galangal and lemon grass, the rind of the lime is also said to be beneficial for digestion. 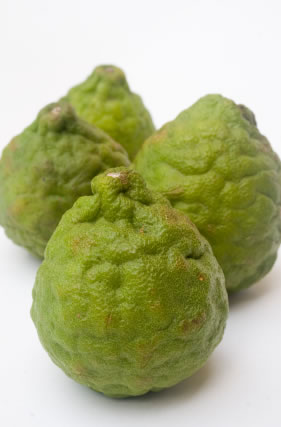 The juice of the fruit can also be used as a detergent for clothing. In fact, it is known as being a very effective cleanser. Some use it as a natural bleach for the removal of tough stains. It is also used as a shampoo to clean hair.

Not only does it leave the hair nice and squeaky clean, but it also invigorates the scalp. Many believe that use of the kaffir lime in this manner will refresh a person’s mental outlook and also keep away evil spirits. Moreover, this lime is a natural deodorizer with a wonderful scent of citrus blossoms.

Every time the zest is scratched, it emits a refreshing and inviting perfume. These uses are mainly found in Thailand, where almost every countryside home has a kaffir lime tree in the yard. For those living in rural villages, just one kaffir tree will supply enough limes to keep the entire house and the family clean, thus making the kaffir lime also an inexpensive household cleanser and detergent.

Where to Find Kaffir Limes

Kaffir limes are not very easy to find, especially if you do not live in Southeast Asia. As such, if you are truly interested in using this as an ingredient in dishes or for its many other uses, it may be best to grown your own kaffir lime bush. You can visit a local nursery and request they order one for you. You can also find many vendors online who can ship the kaffir lime bush directly to you.

When growing and maintaining a kaffir lime bush, you will want to give the bush plenty of water during the warm summer months. Also make sure it gets citrus fertilizer and plenty of sunshine. Prune it to maintain its bushy shape. If you live in a frost-free area, you can keep your lime bush outdoors year round. However, if your area drops to freezing temperatures, you will need to bring your bush indoors during the cold winter months. Harvest the leaves during the summer. Seal the limes and their leaves in a plastic bag and freeze them, as they will keep this way for at least a year, and thus, can be used over time.

Kaffir lime trees can be found online for around $40 to $50. In addition, you can purchase Thai kaffir lime leaf powder online for about $7.00 for half an ounce.