Referred to as the linden blossom in North America, the lime blossom is a very powerful, and useful,  medicinal flower. The flowers, inner bark, and leaves of the linden tree have been collected and used to treat a variety of illnesses for ages.

The linden tree is a tree belonging to the tiliaceae family, and thrives in the temperate climates of the Northern Hemisphere. Though it is native to the eastern part of North America, it isn’t typically found is the western half. It is also native to most parts of Europe and Asia.

It can be found in the moist, rich soils of valleys, neighboring other hardwood trees. They grow wild, or because of its reputation as a great shade tree and the fragrant flowers, they are often planted alongside the road or in parks.

It is a very large deciduous tree and can grow to be anywhere from 70 feet to over 100 feet tall. Large asymmetrical, heart-shaped leaves make up the dense, abundant foliage in the summer months.

The tops of the leaves are a dark green, and the underside is very shiny, or sometimes fuzzy and almost white. 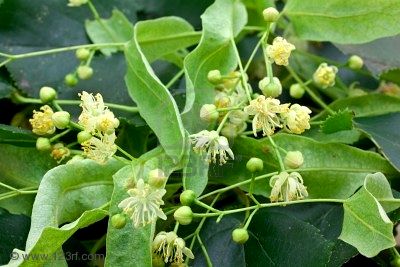 The wood produced by the linden tree is popular with artists of all varieties. Because it is so easy to work with and has very little grain, it is commonly used in carvings.

Because of its better resonance at mid and high frequency, it is a popular material in the making of guitars, both acoustic and electric.

Most well known are the flowers of this tree. Lime blossoms have five yellowish petals, that are extremely fragrant.

In the summer, when the linden tree is in bloom, it is a very popular tree. Bees, perfume makers, and herbalist all have an interest in its flowers. Later on, when the flowers go to seed, small seeds can be found clustered in the leaves. These are about the size and shape of a pea.

How to Use the Parts

The leaves, flowers, and inner bark of the linden tree are all used for a number of things. For medicinal purposes, the leaves and flowers can be dried and used as a tea, used to make a lime blossom tincture, or put in capsule form. Sometimes, the wood is burned, and the charcoal from it is ground up into a fine powder to be used either internally or externally.

Linden trees and their blossoms have been used by man for ages and by a number of cultures. For many it is considered a sacred tree and is very important, even today.

It is said that a tree standing in the courtyard of the Imperial Castle at Nuremberg is a linden tree, planted by Empress Cunigude, wife of Emperor Henry II of Germany. Their reign was near the beginning of the 11th century. Though old and sparse, the tree still stands today.

The linden tree is referred to as the lipa to the Slavic people, and was considered a sacred tree. Today, it is still the national emblem for the Czech Republic, Slovakia, and Slovenia. In 1990, the ‘lipa’ was one of the names proposed for the Slovenian currency.

Up until the age of enlightenment, judicial meetings of the Germanic people were held under a linden tree. Verdicts often came back sub tilia, meaning “under linden.” It was a common belief that the tree helped unearth the truth in certain matters. Sitting under the linden tree was believed to cure epilepsy in some cultures.

The wood and inner bark of the tree was used by the Native American people to build sturdy canoes and weave baskets, and fabrics.

Because of the heart shaped leaves, the linden tree’s leaves, flowers and wood are popular used in love spells. It is also used for protection and good luck purposes. Growing a linden tree in a garden or near a house is supposed to keep negative energies and evil spirits away. Often times, good luck charms are carved out of the wood of the tree. 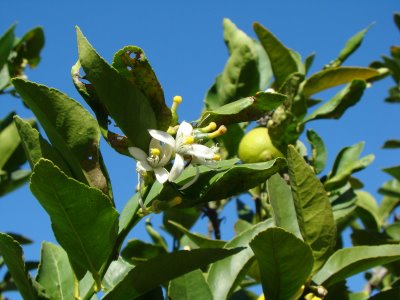 In Ovid’s ‘The Metamorphosis,’ the lime tree was also mentioned. In the story of Philemon and his wife, Baucis, Jove and his son came to earth as humans.

According to the story, “they knocked for shelter at a thousand homes and learned a thousand gates were locked against them.” When they reached the humble cottage of Philemon and Baucis, the old couple let them in and fed them.

Moved by this, Jove chose to spare them and their home as a flood wiped out the rest of the town. At the time of their death, years later, he was changed into an oak tree, and she was changed into a linden tree. To this day, these trees can be found growing next to each other in forests.

The lime blossom has a number of uses. Spectacular, rich honey is produced in hives that are situated next to lime blossoms. The flowers produce an abundance of sticky, sweet nectar that bees seem to find irresistible. Any bee keeper would be lucky to have a lime tree in the area. Some of the world’s best honey comes from the nectar of the lime blossom. When in bloom, a bee will rarely pass up to chance to gather nectar from this tree. It yields a pale, rich, and flavorful honey.

The flowers are also gathered by perfume makers, to capture the beautiful scent, and by herbalists, to capture the many healing properties of this blossom. Just one ounce of a popular perfume, French Lime Blossom, designed by Jo Malone, costs over $50.

Lime blossoms are best known, and most widely recognized as a holistic medicine. It has been used throughout the ages to soothe a number of ailments and medical conditions. It has very few, if any, side effects, and there are no known drug interactions.

In fact, the Food and Drug Administration believes that it may even be safe for women who are pregnant or nursing, and for children. This tea is growing in popularity since it can be used by just about anyone for extended periods of time.

The only possible problem was reported by the German Commission E report. It was found that ingestion of large quantities of lime blossom could possibly lead to heart problems in some people. This only happens in a very small percentage of people, and only after massive ingestion.

Some people swear by lime blossoms to greatly lower stress levels and help treat anxiety and nervous disorders. It has a natural calming effect when consumed in a tea form. Switching from coffee or regular tea to a cup of lime blossom tea three times a day can help one calm down and become less nervous. Infants who are overwrought and upset can usually be soothed by placing them in a bath with a strong infusion of lime blossom.

Because of its calming effect on the nervous and circulatory system, lime blossom is also used to treat high blood pressures, especially those brought on by stress. It not only slows a person’s heart rate, but can also cause mild coronary vasodilation. One herbalist even thinks that it also has a healing effect on blood vessel walls, which can even extend to the improvement of varicose veins. To lower blood pressure, 20 drops of a lime blossom tincture three times a day is recommended.

Since it is a diuretic when taken as a cool infusion, lime blossom can help ailments that affect the urinary tract.

In Lieu of Drugs

Instead of using drugs, such as aspirin and acetaminophen, to lower fevers in children and adults, a hot lime blossom tea can be drank instead. Although it has quite a pleasant taste, it can be mixed with honey. The properties in the flower increase blood flow to the skin and induces sweating, which, in turn, lowers the body temperature. Cold and flu symptoms can be reduced greatly by drinking lime blossom tea. It is an antioxidant and pushes toxins out of the body. Nasal congestion and coughs can also be treated with the tea.

Anti-fungal properties of lime blossom have been reported, and it is sometimes used in lotions for itchy skin. The charcoal from a burnt linden log can also be used as an absorbing powder on an infected wound.

The liver can benefit from the inner bark or sapwood of the tree. In France it is used to help stimulate the flow of bile, and assure the non-aggressive drainage of the liver. This is essential to the natural restoration of the liver.

Mucilage in the lime blossom has a soothing quality when it comes in contact with the membranes of the digestive system, and is used to treat some stomach problems, such as nausea, indigestion, and diarrhea.

Stress related headaches and some migraines can be treated with lime blossom.

The healing properties of the lime blossom is attributed mainly to flavanoids in it. Flavanoids are water-soluble plant pigments that give flowers their yellow, red, or purple colors. They help attract pollinators, such as bees, and also protect the plant from microbes, insects, and fungi. Mucilage, tannins, acids, glycosides, and volatile oils are also in lime blossom, and help produce its medicinal qualities.

Lime blossom can be bought in capsule, tincture or tea form. They can be purchased online or offline, at health food stores or herb shops.

Some people prefer capsules over tinctures and teas. These capsules are filled with a dose of lime blossom leaves and flowers. For 100 capsules, the price is around $7. The usual dosage is two capsules taken three times a day.

A tincture is an alcohol based plant extract. One ounce of a lime blossom tincture will usually cost anywhere between $10 and $15. Recommended dosage is usually 2 – 4 mL taken three times a day.

Lime blossom tea is, by far, the most popular method of consumption. The tea has a nice mild taste, but honey may be added if so desired. It is sold both loose and in tea bags.

When preparing lime blossom tea, it is important to remember to cover it while it steeps. Some important volatile oils that give the tea its soothing effect can escape in the steam. Four ounces of loose tea containing leaves and flowers can be purchased for around $7, and the cost of about 25 tea bags is about the same.

If you’re gathering your own lime blossom, the flowers are best picked a couple of days after it has rained. To make sure the sun hasn’t dried up any essential oils, between ten in the morning and noon is the best time to pick the flowers. They should be fully open and dry. To dry them, place them on paper towels or newspaper until dry, remembering to turn them everyday. Once dry and brittle, they can be stored in sealed jars or a paper bag.