Pyorrhoea is an advanced form of gingivitis and the symptoms can be very similar. Pyorrhoea is the world’s second most common dental problem following simple tooth decay and gingivitis.

Gingivitis is a mild and common form of gum disease that if left untreated or ignored can become the more severe pyorrhoea. Gingivitis is an inflammation of the gums. Because the condition can be so mild, an individual may not realize they have a problem. The cursory signs of gingivitis is swelling and bleeding of the gums.

The most common reason for gingivitis is poor oral hygiene so it is important to establish daily oral hygiene routine and periodical checkups with a dentist. Gingivitis is the only one of the seven periodontal diseases that can be reversed or eliminated. The other six categories are considered destructive and permanent.

Pyorrhoea is the more severe form of gingivitis. Pyorrhoea or periodontitis occurs when the gingivitis condition worsens and there is bleeding and pus-like discharge from the gums. The discharge is from the root of the teeth and gum, which leaves a bad odor in the mouth. Pyorrhoea eventually leads to inflammation and infection of the ligaments and bones that support the teeth.

The result can be a devastating loss of the alveolar bone around the teeth and if unchecked, can lead to the loosening and loss of teeth. The bone loss is irreversible and gums begin to pull away from the teeth or disintegrate entirely. It is the number one cause of adult loss of teeth. The gum disease is caused by microorganisms adhering to and growing on the surface of the tooth. Many times, the individual has an antagonistic autoimmune response against the microorganism. 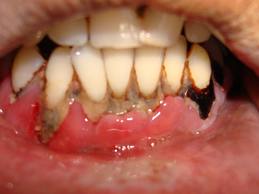 The primary cause of pyorrhoea is an accumulation of a bacterial growth at the gum line called dental plaque. If untreated, this microbic dental plaque forms a hardened surface to form calculus or tartar, as it is s familiarly known.

Tartar above and below the gum line must be removed by a dentist or a dental hygienist. This common procedure is a first-line defense against pyorrhoea and its resulting loss of bone and tissue surrounding the teeth.

It is important to note that some underlying medical conditions lend themselves to the propagation of plaque and tartar leading to the periodontal diseases. Diabetes, Down’s syndrome, genetic defects and autoimmune disorders can lead to pyorrhoea in the individuals afflicted with these disorders.

Symptoms of pyorrhoea are well documented and easy to recognize.

Untreated, pyorrhoea can lead to several debilitating conditions for the person suffering from pyorrhoea.

Pyorrhoea and its complications may lead to the onset of diabetes, cardiovascular diseases and stroke. It can also lead to the development of some cancers.

A dentist or periodontal specialist diagnoses pyorrhoea through a clinical examination. The dentist will examine the gum line using X-rays to look at the surface below the gum line and the alveolar bone surrounding the teeth. Examination of the mouth and teeth by the dentist will determine the depth of deposits of plaque and calculus, which may be visible at the base of the teeth.

Oftentimes, there are enlarged pockets in the gums, which can be analyzed by the dentist with a probe specifically designed for that purpose.

The goal of treating pyorrhoea is to reduce the inflammation of the gums, eliminate the gum pockets if possible, and treat any underlying condition that may be an aggressive force in the acceleration of the pyorrhoea.

A dentist or the hygienist will first employ a method called scaling. Scaling is the use of instruments and devices to removed calcified deposits from the teeth. They will also use a method called planing to smooth rough teeth and any dental appliance must be fitted or repaired if needed.

The dentist will instruct and demonstrate a vigorous and meticulous home care program. This protocol will include brushing, flossing and rinsing techniques, all designed to stop the destructive progress of pyorrhoea. Patients who suffer with periodontal diseases are encouraged to have more than two dental cleaning and scaling treatments per year.

If the pyorrhoea is advanced, a dentist may recommend surgery. In the actual surgery itself, gum pockets may be opened and scaled of all plaque and tartar. There are numerous procedures that can be performed based on necessity.

Patient who undergo scaling, plaque removal or tissue and bone surgery may experience bleeding and tenderness in the gums which gradually recedes over a one to two week period.

There are actually a myriad of homeopathic and home remedies that block or arrest the development of pyorrhoea.

Several home remedies are available to help stop the spread of pyorrhoea.

If the cause of pyorrhoea is a dietary deficiency, a daily supplement of CoQ 10 is recommended. Mouth rinses containing zinc or folate solution can be used as a mouthwash twice daily,

The number one prevention method for pyorrhoea is good daily oral hygiene. The second is dietary considerations, which have a long-term impact on stopping the spread of pyorrhoea.

Teeth should be brushed twice a day for two minutes, allocating the time in 30-second intervals of upper teeth, bottom teeth, and each side. Move the jaw slightly to one side to reach the sides of the back molars. Change the toothbrush every month because bacteria can collect on the brush and cause a recurrence of an infection. Lightly brush the gums and angle the brush to reach up under the gum line.

Some studies show that dry brushing for the first minute and a half with no toothpaste can eliminate 67% of bacteria alone. Therefore, some dentists recommend dry brushing first, followed by the same regime for 30 seconds with a wet brush and toothpaste.

If a person is in a situation where they are unable to brush, a simple rinse of water can remove up to 30% of bacteria.

Teeth should be flossed once a day taking care to floss between all interspaces of the mouth. Use a long length of flossing thread, using a clean area of the thread between each set of teeth.

A dentist may recommend a mouthwash that helps stave off further deterioration. There are two that clinical research shows are effective against plaque and tartar buildup on the teeth.

Chlorhexidine is available by prescription only. The reduction of plaque can be as high as 55% and it reduces gingivitis by 30% to 45%. It is recommended that the rinse be used twice daily.

However, it is important to note that Chlorhexidine binds to tannins, so people who regularly drink tea, coffee and red wine should be aware of the possibility the mouthwash may cause staining. Patients using this wash should wait 30 minutes after brushing before rinsing. Certain toothpastes can deactivate the mouthwash, rendering it ineffective.

Listerine is an oral rinse comprised of essential oils. It should be used as a rinse for 30 seconds twice daily. It does have a high alcohol content so for individuals concerned with alcohol content, full disclosure should be made. Newer Listerine products contain the same essential ingredients with lower alcohol levels and a more pleasant taste.

Flavonoids provide a powerful protection against pyorrhoea and are found in a variety of fruits and vegetables. Flavonoids are known for their powerful anti-inflammatory and antioxidant properties.

Fruits high in flavonoids include pomegranates, blueberries and cranberries. Great sources of this beneficial antioxidant can be found in vegetables such as onion, lettuce, brussel sprouts and asparagus. Herbs that can be used include dill, basil, coriander and thyme. Effectives teas made of chamomile or peppermint leaves can help prevent pyorrhoea.

Foods high in sugar, processed foods, white bread and grains are infamous for their contribution to the formation of plaque and tartar. These foods should be eaten as little as possible. If these foods are eaten, it is wise to wait 15 minutes before brushing because the combination of sugar and toothpaste may actually destroy tooth enamel.

Drinking seven to eight glasses of water a day increases the production of saliva. Saliva has been found to dilute toxins created by plaque. Water will also help reduce inflammation caused by pyorrhoea. Saliva produces nitrates, which convert to nitric oxide, helping to prevent the survival of bacteria in the mouth. Increasing water intake is particularly important as one ages, when less saliva is produced.

Smoking cigars, cigarettes and pipes is discouraged because tobacco can deplete the body of essential vitamin C.

With proper dental hygiene, regular visits to the dentist and proper food and vitamins, prevention of the spread of pyorrhoea can preserve the natural balance needed for healthy teeth and gums.