Bedwetting is commonly defined as involuntary urination during sleep in children after the age that bladder control normally occurs. It can happen any time the child is asleep, whether day or night, but most commonly occurs during nighttime sleep. Nocturnal enuresis is the term used to describe instances of involuntary urination at night.

The primary, and often only, symptom of nocturnal enuresis is the involuntary release of urine during nighttime sleep. Other symptoms may occasionally be present, such as daytime wetting, general incontinence, increased urgency to urinate, increased frequency of urination, burning during urination, and constipation.

Nighttime wetting has numerous potential causes, with the enuresis likely influenced by more than one of the following. Most cases of bedwetting fall under the category of primary nocturnal enuresis. PNE cases are occasionally caused by medical conditions, but most can be attributed to a developmental issue. In these cases, the body has not yet matured enough to stop urine production at night. This results in the bladder filling up during a period where awareness of the need to urinate is diminished due to sleep. 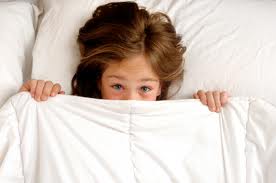 The body naturally develops the ability to delay urine production during sleep by around age 5. Genetics can also play a role, as children whose parents were not bedwetters have only a 15% chance of becoming bedwetters themselves. In contrast, children with one or two parents who wet the bed exhibit a 44% and 77% chance of developing enuresis respectively.

There are other less common causes of bedwetting, and since there are no clear tests to determine if enuresis is caused by a developmental delay or genetics, the following more-easily diagnosed causes are often either identified or ruled out first.

Several medical conditions can cause a person to wet the bed. Infections and certain illnesses, such as a urinary tract infection, can insight involuntary nighttime urination, though the likelihood of this is estimated at less than 5% of all cases. Physical abnormalities might also be a cause of bedwetting, primarily due to a smaller than normal bladder.

In children, a condition in which an insufficient amount of the anti-diuretic hormone (ADH) is produced might also play a role. This hormone normally increases at night, signaling the kidneys to slow urine production. If low levels of ADH continue throughout the night, the bladder will continue to fill often leading to a wet bed.

It is not uncommon for bedwetting to result from psychological trauma or anxiety. Mental or emotional issues resulting from a death in the family, negative social pressures, physical or sexual abuse, or a hostile home environment, can manifest themselves through nighttime wetting. Enuresis itself is not regarded as a psychological disorder, but it can be symptomatic of a troubled psyche.

Certain sleep disorders have also been identified as contributing to instances of bedwetting. Sleep apnea, a condition where the airway becomes obstructed during sleep, can be a potential cause of nocturnal enuresis. Sleep walking can also be a cause as the sleep walker often dreams they are in another room of the house, and thinking they are in the bathroom, they urinate only to find upon waking that they have wet the bed.

Substances which increase urine production, such as caffeine, dark chocolate, and alcohol, are called diuretics. These substances work opposite any ADH signals active in the body, telling the body instead to produce more urine rather than less.

A few other potential triggers thought to contribute to enuresis include the following. Stress is an often documented cause of a return to bedwetting, or secondary enuresis. The constant tension in the body experienced by those under heavy stress wears out the muscles, and leads to difficulty maintaining stamina in the sphincters associated with the bladder at night. Heavy sleeping can also lead to bedwetting. Though children have been shown to wet during all five sleep stages, parents who report that their children are heavy sleepers also report higher rates of bedwetting.

This could be due to the difficulty for those children to transition from the sleep state to being awake, causing difficulty in resuming bladder control once the ADH hormone begins to diminish. Constipation can also be a cause as the excess fecal matter can press against the bladder making the need to urinate more urgent. Some believe food allergies might also be potential cause of enuresis, though more documentation is needed. One controversial cause of nighttime accidents is aggressive or improper potty training. Training too early or with too much negative reenforcement has been sighted as a possible environmental cause of bedwetting, due to the anxiety children might experience with such training.

With bedwetting, diagnosis usually begins with an in-depth consultation between the family physician and the parent or guardian of the child. In some cases, the child may be asked some questions directly. These questions might include how many times has the child wet the bed, have they ever been dry, is there any family history of bedwetting, and are they taking any medications currently. He might be curious about the diet of the child, or whether the child has ever wet during the day.

Other questions will also be asked specifically to rule out some of the less-ambiguous potential causes.Following the consultation, and based on the answers given, a series of tests will be run to attempt to diagnose the cause of the wetting issue or to rule out even more potential causes, allowing the doctor to narrow down the list of possible triggers.

The physician will likely take a urine sample, and X-rays may be necessary if the doctor feels as though a physical abnormality might be behind the enuresis. With secondary enuresis, especially if the individual has reached middle age or beyond, a more extensive evaluation might be given, taking into account more psychological factors. In many cases however, it proves easier to pin-point the cause of secondary enuresis, since it often corresponds with an event, injury, or treatment.

Treatment for bedwetting varies from medical intervention to counseling. It is very specific to the identified cause of the enuresis. If a physical abnormality is identified as the source of the issue or if the bladder was damaged in an accident, surgery may be performed to strengthen the bladder walls or repair the urinary tract. If a medical condition, such as an infection or Diabetes, seems to be the cause, medications may be prescribed. In the majority of cases, neither surgery nor medication end up as the recommended treatment for nighttime wetting.

The most often recommended treatment in cases of primary nocturnal enuresis is simply to wait for the child’s body to mature, since most physicians do not expect a child to be accident-free until age 5 or so. Another common treatment prescribed for bedwetting is the use of a bedwetting alarm. These alarms sound when they sense wetness in the crotch area, causing the child to wake and become aware of the sensation of a full bladder. They have proven to be considerably effective as over time, the child begins to awaken from sleep on their own when they experience the now-familiar bladder pressure.

Punishment, as a tool to stop bedwetting, has been proven ineffective in several major studies on the subject, and has been shown to increase the frequency of bedwetting rather than reduce it.

Bedwetting can be traumatic for a child, causing embarrassment, social awkwardness, and the feeling that something is wrong with them. For adults or children who return to wetting, it can cause frustration at the inability to control their own body, and depression due to the struggle to regain continence, which is often dealt with in secret. For many individuals, treatment does not bring with it an instant cure, and bedwetters must deal with wet beds, stained pajamas, and heavy hearts in the mean time.

Several coping methods exist to deal with wetting the bed. The first, and most obvious, is diapers or absorbent briefs. Heavy wetters will likely need an overnight diaper, such as Depends, to prevent urine from reaching the bedding and soiling pajamas. The average bedwetter however, can usually opt instead for absorbant underwear, such as Goodnights or Pull-Ups. These briefs are less bulky than a standard diaper, and pull-on like underwear.

They are increasingly being made to look like underwear, to the point of felling like cloth, and even mimicking the waist-band. There are absorbent underwear options for the child, all the way up to the youth and adult age groups. These options make it less embarrassing for a child to attend a sleepover or camp-out, and therefore less psychologically draining. It should be noted that some believe that excessive use of protective underwear can actually prolong bedwetting, since the individual cannot feel the resulting wet bed as they normally would. Another coping option is the use of a mattress cover.

These are employed to prevent the mattress from becoming stained with urine, and the accompanying smell. Finally, almost all bedwetters are advised to limit the intake of fluids several hours before bed. This gives the bladder time to produce the remaining urine from the days meals, which can be voided before bed, leaving the body less likely to produce a significant amount of urine over night.

A consistent sleep schedule, allowing the individual to get a full-nights rest, and regimented visits to the bathroom go a long way in preventing accidents at night. Also, avoiding enuretic triggers, such as diuretics, before bed should also be observed.

There are few complications that arise from wetting the bed, but the following should be considered. Rashes and other skin issues may result from sleeping in wet clothing over an extended period. Diaper rash cream or petroleum jelly can ease the discomfort and prevent further inflammation. As mentioned before, emotional or psychological issues may result from bedwetting, and should not be dismissed as insignificant.

Several alternative therapies have been used to treat enuresis, and these treatments have been gaining popularity. Hypnosis has been used to varied success on individuals who wet at night, focusing on suggestions to stay dry or to wake to use the toilet upon certain triggers. Acupuncture has also been used to treat bedwetting, with some success. There are several homeopathic remedies for nighttime wetting, but consider before use that these have been determined to be ineffective in clinical trials.