Sleep disorders are a disruptive and frustrating occurrence that nearly 30% of the population suffer from in some way. Caused by both physical and mental conditions, sleep disorders are difficult to diagnose and to cure, and can be very hazardous to everyday life.

Lack of sleep or improper sleep can cause people to feel lethargic, unaware, and lessen the senses of reaction and cognitive thought. The American Sleep Association lists over 20 sleep disorders in its registry of terms, all of which have different symptoms and potential cures.

The typical person passes through five stages of sleep when they are resting healthfully. These stages include 1, 2, 3, 4, and REM sleep. The first stage of sleep is very short, and leads into stage 2, conatins over 50% of sleep. 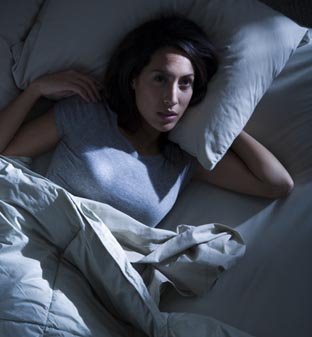 Thirty percent of time goes to stages 1, 3, and 4, while only about 20% of sleep counts towards REM sleep. REM stands for “rapid eye movement”, and this type of sleep is the deepest. In this stage the body repairs itself and limb muscles are paralyzed.

REM sleep is also the stage in which sleepers dream. Some people find themselves groggy for long periods of time if they are awakened during REM sleep. If any
of these stages of sleep are interrupted in some way, this is described as a sleep disorder.

The most common name used to describe sleep disorders is “sleep problems.” People often also speak of “having trouble sleeping,” which may indicate they suffer from a sleep disorder. An easier way to classify sleep disorders is to break them into three separate categories: lack of sleep, disturbed sleep, and excessive sleep. Each category contains its own disorders, described in detail below.

Insomnia is the basic inability to fall asleep. Encompassing many other problems, such as mental or stress disorders, insomnia can be a symptom of another disease. Insomnia is very disruptive to daily life as those who suffer from it find themselves constantly tired and “fuzzy”. Long term effects of insomnia or lack of sleep include damage to the immune system and impairment of judgement, hand-eye coordination, and memory.

Sleep Apnea is classified by the occurrence of interrupted breathing while sleeping. There are many proposed causes for this disorder, including windpipe obstruction-or even neurological disorders involving nerves. Many older or obese people find themselves
suffering from this disease as their windpipes are commonly blocked.

People suffering from sleep apnea because they often do not enter into a state of REM sleep as their body must keep them awake to perform the basic muscle functions of breathing. Lack of sleep and oxygen can
cause headaches, and those who suffer from sleep apnea are more prone to both strokes and heart attack.

This problem causes a disorder in the brain during sleep. This occurs when the nerve synapses between the brain and the bodily muscles are interrupted, causing the brain to send signals to the muscles that cause them to move. In this way, the sufferer never fully enters or completes REM sleep and therefore will not feel rested. REM sleep disorder is also known to cause sleepwalking or sleep-talking due to a misfire in brain signal information.

Known as RLS and also seen in Periodic Limb Movement Disorder, this is a common issue affecting many elderly individuals. A genetic disorder, RLS sufferers feel tingling sensations in their legs or other extremities that cause them to want to move, preventing them from getting a restful night’s sleep. Also common is a jerking sensation of the legs, which temporarily wakes the patient.

Affecting an estimated 250,000 people in the United States alone, narcolespsy is the sensation of falling asleep at various times throughout the day, often in an inconvenient or even dangerous place. Many people with narcolepsy also experience temporary paralysis of the
muscles, hallucinations, and disrupted nighttime sleep as well. This is a difficult disease to cure and can be very disruptive to normal activities.

Symptoms of sleep disorders mainly include those symptoms specific to anyone with a lack of sleep. These can include lack of motor coordination and slower reaction times. Personality can also be affected as sufferers of sleep disorders are known to be forgetful,
irritable, and often have difficulty focusing.

There are physical signs of sleep disorders as well, including sluggish movement, excessive blinking, and even trouble eating or exercising. If you think you or someone you know may suffer from a sleep disorder, consider speaking with your physician.

There are a number of different causes of sleep disorders, some more preventable than others. They include:

People who work nocturnal hours often find that their body clocks have difficulty setting. This biological clock responds in certain ways to the sun and dark, which in turn can affect the sleep patterns of an individual.

Depression, schitzophrenia, and other mental disorders are known to cause sleep problems. Even something as simple as excessive stress can make an individual begin to have difficulty sleeping correctly.

Those suffering from diseases or changes in the body may find themselves strapped with a sleeping disorder. Often the fluctuations in body homeostasis and side effects of medications can have an adverse affect on sleep patterns.

Of adults over the age of 65, about half have some sort of sleeping disorder. This could be caused b a combination of the above factors, or simply as the body deteriorates, sleep become more difficult.

Risk factors for sleep disorders include anyone who regularly experiences one of the above causes. Children and the elderly are particularly suceptable to sleep problems. Women tend to have higher instances of sleep related doctor visits as well. It is commonly accepted that those who are overweight are more likely to suffer from sleep disorders due to the undue stress on the body and breathing system. If you find yourself suffering from any of these risk factors, take steps now to better your health if you do not wish to develop a sleep disorder.

Go bed and wake up at the same time each night, even on weekends. Your body will adjust to the sleep schedule and learn when it is an appropriate time to begin rest, and when it is necessary to wake up and be alert.

The average person needs between 20 and 30 minutes of exercise per day. Exercise works not only to help keep of excess weight, but to expend energy the body may be storing that makes sleep more difficult. One should not exercise any sooner than 4 hours before bedtime as exercise often causes the body to be more alert initially.

All of these substances have been known to affect the body in some way. Caffeine and nicotine both contain stimulants which keep the body awake and alert even when tired. Alcohol, a depressant, causes people to miss out on REM sleep, which can have adverse effects throughout the day.

If your schedule permits, try and sleep until sunlight. Your body will adjust to the light waves and learn that sunlight is an indication of enough sleep. Your natural circadian rythyms are affected more than you realize by the light and dark cycles of the earth.

Particularly if you suffer from sleep apnea, losing weight is a great way to begin the transition to better sleep and overall health. This can help alleviate breathing problems as well as some mental and emotional issues that come from being overweight as well.

Herbal teas and others without caffeine have been suggested to help lull suffers into sleep. Lavendar and Earl Gray teas should be tried first.

If you normally sleep on your back, for example, try sleeping on your side or stomach. If breathing is your sleep problem, these different positions may change the location of your windpipe and therefore your sleep pattern.

When all else fails, do not lie in bed for more than one hour if you find yourself having trouble sleeping. This can retrain the brain to associate that room and position with something other than sleep. It may also be helpful to remove the TV and computer from the bedroom for this purpose.

Over the counter sleeping pills are widely available, and come in various doses. Many of the brands available today are non-habit forming, which is a primary concern of those who object to taking them. If you have questions about your use or continued use of sleeping pills, be sure to check with a doctor or pharmacist before beginning a regimen.

Found at most pharmacies and grocery stores, these strips work by using an adhesive strip to hold the nasal cavity open during sleep. This, in turn, makes breathing easier and can relieve the milder symptoms of sleep apnea or breathing disorders.

Designed to open blocked windpipes and help the patient breathe easier, surgery for sleep apnea usually involves a cutting and removal of excess skin, and is an inpatient procedure. Done only by a trained surgeon, sleep apnea surgery is expensive, but often goes a long way in correcting sleep apnea issues.

Appropriate for those who find themselves having trouble breathing at all times of the day, deviated septum surgery works by aligning the septum muscles and bones within the nasal cavity. Patients often find themselves able to breathe easier and more clearly after having this operation.

When to Call A Doctor

If your sleep disorder become disruptive to your everyday life and you have found that over-the-counter and home remedies do not help,
consider speaking to a doctor or neurologist about your options.

There are many ways to diagnose the most complicated of sleep disorders, including a polysomnography, which uses EEG machines to monitor brain activity, an overnight oximetry session, which measures oxygen levels in the blood, or even a thorough examination of past medical history. Your doctor can help you decide if you may need to visit a sleep specialist for a more thorough diagnosis and subsequent treatment.

The best way to prevent sleep disorders is to maintain a constant and predictable sleep schedule. Any disruption to this schedule can cause you to have trouble regaining an easy, restful night’s sleep, so try your best to maintain all of the healthy qualities involved with getting a good sleep.

If you find yourself worried about developing a sleep disorder, talk to your doctor now about what changes you can make to prevent that from happening.