The hallmarks of a sore throat include the always familiar dry scratchiness and the painful swallowing, and it always makes suffers feel miserable. When a person has a sore throat, which is also known as pharyngitis, it is usually because of a viral infection, such as influenza or the common cold. In fact, many people recognize sore throats as the first sign of getting ill.

Sore throats are such a common complaint that it is one of the primary reasons people make a doctor’s appointment, though these office visits usually aren’t necessary. For the most part, sore throats are due to viruses that will go away without any medicine. Sore throats that are due to bacterial infection, on the other hand, though rare, will require medical attention or antibiotics. While the sore throat is present, over the counter medications can help soothe the feeling. 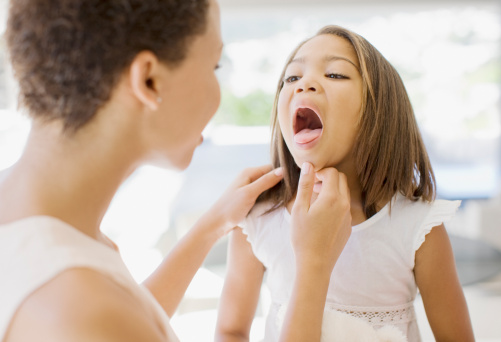 The two main symptoms of sore throats include a scratchy, dry or swollen throat and the presence of pain when trying to talk, breathe or swallow.

Sore throats usually are the result of an infection that comes with its own set of symptoms.

For instance, sore throats from a cold may include coughing, sneezing, fever and a runny nose.

When the underlying cause of a sore throat is something as simple as a flu, it should heal itself within a week.

Less commonly, when the sore throat is due to something else, it will need treatment.

There are signs of a sore throat having an underlying cause that is more serious, such as strep throat, including

Though it is an uncomfortable condition, the majority of sore throats will go away and are not harmful. However, sometimes, they may signal a condition that is much more serious.

See a doctor if any of the following occur

Usually, a sore throat is due to a virus, which are the same germs that are the cause for the common cold and for influenza. Less commonly, a sore throat may have a bacterial infection to blame. Whatever the cause of the illness, the germs enter the body by way of the nose or mouth, due to either breating in the particles released into the air once someone sneezes or coughs or by coming into contact with an infected person or sharing an object, such as toys, doorknobs, utensils, towels or a telephone. It is because these germs are highly contagious that they have a tendency to spread in areas where people congregate, such as schools and offices.

These other illnesses are also known to cause sore throats

Other causes of having developed a sore throat may include 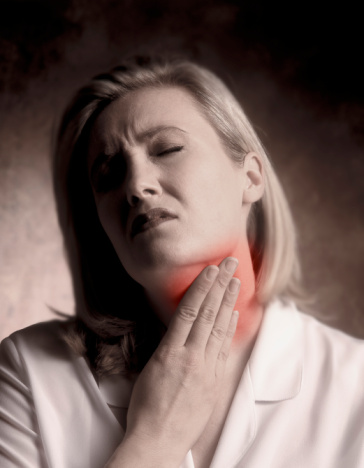 While it is possible for anybody to get a sore throat, there are some risk factors that make certain people a little bit more susceptible to developing them.

However, it is possible for some other more serious problems to develop due to sore throats and their underlying cause

Strep throat, which is a bacterial infection, is capable of causing other conditions, such as

The more common symptoms and signs of strep throat include:

Mono, otherwise known as infectious mononucleosis, is an infection that might lead to further complications, which may include

Symptoms and signs common to mono include:

The doctor will likely diagnoses what is causing a sore throat after conducting a physical examination and performing a throat culture. During the examination, the doctor will probably check the throat to see if there is any redness or swelling, as well as any traces of white streaks or pus present on the tonsils. Though all of these signs may indicate some kind of infection, there is currently no accurate way to determine whether an infection is viral or bacterial just by looking.

It is for this reason that a doctor will want to take a throat culture or a rapid strep test. This will check to see if there is any bacteria present that causes strep throat. Either way, the doctor will take a sterile swab and rub it over the back of the throat and tonsils in order to obtain a pure sample of the secretions.

Back in the day, there was only one way to test whether or not a person had strep throat, and it was to have the secretions cultured within a lab, and this process could take upwards of two days. Now, the doctor is capable of conducting a rapid test and allows the results to come back within hours. However, the rapid test may miss a fair amount of present infections, so the doctor may opt to have laboratory testing done anyway.

Usually, a sore throat will go away on its own within a week and without treatment, which works well with the fact that there is no medical therapy possible to treat virally-caused sore throats. However, getting extra sleep and drinking plenty of fluids can help speed up the process.

Try to go for fluids that are in the same family as soups, water and broths rather than sodas or other caffeinated drinks that may dehydrate more. If it is difficult to swallow, try to sip broth through a straw or to let some ice chips melt. Gelatin products, such as Jell-O are also easy to swallow.

Back in the day, doctors would throw antibiotics at anybody who had a sore throat in order to help cure it and to prevent other complications, such as rheumatic fever. However, this is ceased because overusing antibiotics eventually led to a dramatic increase in bacteria strains that are resistant to antibiotics. On top of that, the majority of sore throats are not due to bacteria anyway, meaning that antibiotics will not help.

Should the doctor recommend antibiotics, it is important to take the entire course of the prescription, even when feeling better. Taking the antibiotics will help preventing it come recurring and from letting the bacteria become resistant to the treatment. Children who are on antibiotic therapy and feel better and are without a fever may return to school or their child care when they are no longer contagious, which should be a full 24 hours after starting treatment.

Until the sore throat has completed its course, try following these tips

Try to follow these tips to ensure that everybody stays healthy