Lipoic acid (LA) is an organosulfur compound, considered to be an antioxidant, a substance that renders harmless certain chemicals called free radicals. LA is a compound where a disulfide bond binds sulfur atoms and this distinction classifies it as “oxidized”. Alpha-lipoic acid is converted into dihydrolipoic acid on the body.

This oxidization and conversion is the very process by which Lipoic Acid terminates the damaging oxidization of free radicals. Free radicals are destructive chemicals produced by the body and they are thought to be a major contributing factor in aging, age-related disorders and other ailments such as stroke or heart disease. 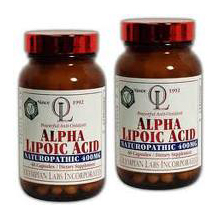 Lipoic Acid is also referred to as Alpha Lipoic Acid (ALA), a synthetic form of Lipoic Acid, and was discovered over 30 years ago but up until 1989, was classified as a vitamin. Research scientists discovered the anti-oxidant properties of the molecule and studies continue in the remarkable ways it works in the human body.

It is the start of a revolutionary breakthrough in research of some illnesses, since some scientists believe ALA is more potent than its popular cousins, Vitamin C and E.

Alpha Lipoic Acid is not to be confused with alpha linolenic acid, which is an omega-3 fatty acid that may contribute to a healthy heart. Since both are abbreviated with ALA, the confusion can de understood. Alpha Lipoic Acid is also classified as thiotic acid and presented as such in research and medical papers.

There are two sub-forms of ALA. The natural form (racemic) of RLA is pure and found is nature and the human body. SLA is a by-product of chemical manufacturing processes. A combination of the two R/S-LA is often found in the available commercial products found in health stores and vitamin shops. SLA alone or mixed with RLA is considered safe and non-toxic unless there is a thiamine deficiency. SLA can have an adverse effect in these incidences, even causing death.

RLA has existed since the dawn of time, essential to all life forms, known as a protogen in aiding metabolism. The substance was first isolated in a crystalline form by Dr. Lester Reed from the University of Texas, when he extracted a miniscule amount from over 10 tons of beef liver in 1951. Collaboration with chemists at Eli Lilly Company provided a means for structural identity and composition.

It was not until 1952 that the chemical sister SLA was produced by chemical synthesis. Germany and Japan were forerunners in the study and synthesis of Alpha Lipoic Acid. Despite the evident that the two sub forms of ALA were not bioequal, studies continued in different clinical trials using RLA and SLA.

However, it was the first animal trial profiles presented by Professor Leonardo Donatelli at the International Symposium on Thiotic Acid in 1955 that evidence was set forth on the wide variety of chemical toxins that were rendered benign by ALA. The entire globe responded with a stimulated interest in discovering new applications for the ALA.

The first clinical studies conducted using humans for research occurred in the 1970’s. These studies were held in an association formed by Dr. Frederick C, Bartter, Dr. Burton N. Berkson and the National Institute of Health.

Since the 1960’s when ALA was used in research clinical trials in Germany, it has proven its efficacy in treating diabetic neuropathy. Neuropathy is a painful condition where the myelin sheaths of nerve endings are damaged or disintegrated.

Alpha-lipoic acid with its ability to kill free radicals helps reduce the debilitating symptoms of neuropathy. Patients diagnosed with neuropathy experience burning, itching, swelling, tingling and numbness in their extremities. It has also been shown to reduce blood sugar levels. ALA’s greatest success in this treatment is when it is administered by intravenous injection. A second diabetes related illness known as autonomic neuropathy is greatly improved with oral dosages of ALA repairing nerves responsible for the heart.

Both peripheral and autonomic neuropathy can be caused by other diseases or conditions. Injuries, chemotherapy, alcoholism, shingles, Lyme disease, kidney failure, thyroid disease and nutritional deficiencies can lead to nerve damage.

Two of the original American researchers, Drs. Bartter and Berkson, administered LA to 79 patients across the United States. These patients suffered from acute and severe liver damage and an astonishing 75 of the patients regained full liver function. Dr. Berkson took his research further, administering ALA to patients suffering from chronic liver diseases such as hepatitis, cirrhosis, jaundice and alcoholism. The doctor’s treatments were successful and at the time, ALA was thought to work through the same biochemistry of a B-vitamin. Today, some call ALA the answer to an alcoholic’s dream, repairing damaged liver organs and tissues to the former state of health, while others cite the fact that more research is needed before that claim is made.

Alpha Lipoic Acid is the only antioxidant that can cross the blood-brain barrier and passes directly into brain cells. This promotes great hope for victims of stroke and cardiovascular disease.

Because the brain-heart link is so potent in the life-threatening conditions, ALA protects the brain cells from free radical damage, lowering the risks of further complications for these patients. While no human studies have been performed, animals treated with ALA suffered less brain damage and survived at a rate four times greater than the animals who received no ALA.

Because ALA has the ability to pass directly into the brain, research continues to ascertain the effect of Alpha-Lipoic Acid in patients suffering from dementia, Alzheimer’s, cerebral dysfunction and psychiatric conditions as they apply to aging and the human body.

Alpha Lipoic Acid has had a remarkable success rate when administered alone or in conjunction with other drugs on poison-related incidences. ALA has been shown to halt or reverse damage done by reverse barbiturate anesthesia. mushroom and mercury poisoning, and antimony poisoning, among others.

ALA continues to be used in clinical studies, predominantly by German, Italian and Japanese physicians who have reported a wide range of clinical or experimental success. 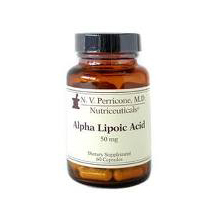 Researchers from the United States, Poland, Switzerland, France and other countries have now begun researching and publishing papers on ALA and their own successful clinical studies. Studies have been conducted on conditions as diverse as weight control, metabolic syndrome, burning mouth, migraines, erectile dysfunction and multiple sclerosis.

Alpha Lipoic Acid (ALA) has gained a great deal of popularity with bodybuilders. More and more products are manufactured with RLA and R/SLA then ever before. Bodybuilding enthusiasts claim the insulin-mimicking properties of ALA leads to Glut-4 transporters ferry the glucose into muscles cells rather than fat cells.

Daily doses of Alpha Lipoic Acid are much higher than a normal dietary supplement. Dosage recommendations from bodybuilders and product manufacturers targeting the same market believe that doses of 1000 mg to 3000 mg per day is optimal for “bulking and cutting”, the process of building muscle and losing fat, creating the perfect body physique. It is recommended that the high dosages be broken up throughout the day and taken with food. The FDA has not approved the high dosage of ALA for individual use nor has it banned the practice.

There have been two food groups identified as lipoid-acid containing foods. The first category is plant-based and has a high concentration of chloroplasts, which are key energy spots in plants. Green leafy vegetables are a source of ALA such as chard, collard greens, broccoli, and spinach.

The other food source is animal-based. Again, it is cellular mechanisms involved that produce ALA. Mitochondria are as critical to animals in energy production as chloroplasts are to plants. Mitochondria are found in organ meats and skeletal muscle. Foods such as heart, kidney, liver and round steak are good sources of body tissue rich in mitochondria. Yeast is also a vessel known to house this important nutrient.

IRS/LA and RLA, the combination and pure form of Alpha Lipoic Acid is readily available in the world in tablet, capsule and liquid forms. There is no correlation data established between therapeutic and supplemental doses. A Recommended Daily Allowance (RDA) has been not yet been established by the Food and Drug Administration (FDA). The FDA, however, is considering the establishment of new labels for ALA to promote and establish dietary needs and recommendations.

Currently there are no established daily doses for ALA supplementation. However, a general dose of 20 to 50 mg daily is considered sufficient for dietary needs. ALA can be found in vitamin formulas at a concentration of less than 10 mg per dose. The antioxidant can be purchased in doses ranging from 30 to 100 mg in all available forms. Higher or therapeutic doses should be discussed with a doctor and a regimen planned for the stated purpose.

Side effects of Alpha Lipoic Acid are usually minimal and mild. They can include headache, tingling sensations, skin rash or muscle cramps. A rare side effect is called insulin autoimmune syndrome, which causes hypoglycemia and reactive antibodies directed against the body’s own insulin.

The safety of ALA is nursing or pregnant women, children and people who have liver or kidney disease is not known and therefore, not recommended.

Patient currently taking diabetic medications should check with their doctor before taking supplementary ALA. This caution would also apply to person taking thyroid medications.

There are a large number of names for Alpha Lipoic Acid. If cautionary warnings apply to an individual or family member, check for these alternate names as they may appear on supplementary or proprietary formulations.