Selenium is a naturally occurring mineral that, when combined with proteins in the body, becomes a powerful antioxidant. It helps strengthen the body in many ways. The most important is how it affects the immune system. By building up the immune system it allows the body to fight off many diseases, such as cancer. Selenium is found in a multitude of food sources and in supplements making it accessible to everyone.

Where Can You Find It

Selenium is a trace mineral found in the soil and is absorbed into plant life. This absorption is key to creating healthy levels of the mineral in food sources. The United States has a high concentrations of Selenium in the soil. Some countries, such as China, have very low concentrations. These areas lead to deficient populations because most eat only locally grown foods. They will need to supplement their diet or eat foods grown in Selenium rich soil. The United States has a well established system of cross distribution which allows for those living in lower level areas to still have access to richer foods.

Good sources of this mineral are corn, wheat, rice, soybeans, Brazil nuts and walnuts. In fact, Brazil nuts have such a concentrated amount of Selenium that intake should be limited. In addition to the plant life, animals that feed off these plants also produce foods rich in Selenium. Beef, chicken, turkey, kidney, liver and fish are all good sources of Selenium. These animals also produce milk, eggs, and cheese rich in this mineral. Therefore, a nutrient rich soil becomes a constant source for good health.

How It Affects the Body

The natural process of the human body includes the metabolism of oxygen. This process causes the formation of bi-products, or free radicals, which can weaken the immune system, lead to chronic diseases and quicken the effects of aging. Selenium is an antioxidant that helps the body to fight against the effects of these free radicals.

This strengthens the immune system and allows the body to function properly. This is the key factor that makes this mineral such an important tool in protecting and supporting our bodies.

Inadequate amounts of Selenium in the body puts additional stress on its systems and increases its chances of falling victim to certain diseases. There are three specific diseases that have been directly linked to Selenium deficiencies. 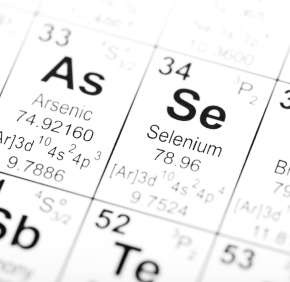 Keshan Disease affects children, causing an enlarged heart and poor heart function. Kashin-Beck Disease causes Osteoarthropathy, a disease affecting the bones and joints. Myxedematous Endemic Cretinism is a deficiency that leads to mental retardation. These reflect the importance of adequate levels of this important nutrient in all ages and stages of life.

Selenium, because of its antioxidant property, has been used in fighting off many diseases and help regulate organ function. Tests have shown it to lower incidence and death from certain cancers. A ten year study showed that men taking 200 mg of Selenium per day had fifty percent less chance of having prostate cancer.

Another study done by the National Cancer Institute found that the return of precancerous colon polyps after surgery was reduced greatly when the patient took antioxidants like Selenium.

There is also evidence that it prevents Hepatitis from evolving into liver cancer. There is ongoing research that plans to substantiate claims that cancer patients with higher levels of Selenium have lower death rates.

Selenium is not just a cancer fighter. Additional studies have discovered many more ways it strengthens the human body, particularly helping patients struggling with various diseases. HIV patients that maintain healthy levels of this nutrient have lower death rates than those with weak levels. It is believed that the already depleted immune system is further weakened by the low levels of Selenium in dying patients.

Arthritis sufferers have a similar problem. Most arthritis patients have low levels of Selenium, resulting in a weaker immune system which can trigger arthritic symptoms.

It is also believed that healthy amounts of the mineral may help prevent heart disease by limiting the oxidation of LDL, or bad, cholesterol.

Findings have recently been released after a nine year study of older men and blood sugar metabolism. The men whose Selenium levels were high had less problems metabolizing sugar. This adds possible prevention of the onset of diabetes to the list of what this antioxidant can do for the human body.

Selenium is also a purifier for our organ systems. It protects us against the presence of unhealthy metals in the body, such as the Mercury ingested with fish and seafood. It is believed that the mineral binds to these metals and weaken the negative impact on the body and its systems. This does more than defend the body, but also allows for the combination of the mineral with the omega-3 fatty acids found in fish and seafood to be used by the body without negative side effects.

Fertility can also be strengthened by healthy levels of Selenium. Low levels of this nutrient have been found in men with low sperm count. It is believed that the antioxidant helps to aid in sperm formation. It is also believed to prevent chromosome breakage, reducing the number of birth defects and miscarriages.

Healthy levels have also been found to reduce edema, or swelling, after surgery and during pregnancy. New studies are being done to expand on new ways Selenium may improve our health.

Selenium supplements are found on many store shelves and through the internet. They are considered safe and effective. In fact, the Food and Drug Administration has allowed the manufacturers to state on the bottles that the mineral may prevent certain cancers. There are various dosage levels and can be found in tablet or liquid form.

Supplements that combine Selenium with other nutrients, especially Vitamin E, are very popular. It is believed that the Selenium is even more effective when combined with Vitamin E. The cost is reasonable, with prices typically lower through online health stores. Health focused stores also tend to have a wider selection available.

Those that benefit most from these supplements are people living in areas known for low Selenium levels and sufferers of chronic disease, particularly those that involve the immune system. Patients with gastrointestinal disorders, such as Crohn’s disease, should also supplement their diet. When the gastrointestinal tract is not working properly it does not absorb all the nutrients.

Taking additional supplements will better guarantee that the body is getting what it needs. Anyone suffering from these types of issues should discuss the need for supplements with their physician.

The recommended daily allowance of Selenium varies based on age. The dosage remains the same for men and women. However, there is a required increase during pregnancy and while breastfeeding. The average adult should be ingesting about 200 micrograms a day. Health issues, such as low absorption rates due to gastrointestinal issues, may demand higher amounts. Higher levels should always be based on a doctor’s order to prevent toxic levels.

It is possible to ingest too much Selenium. For example, there is some discussion that high levels of Selenium may lead to hypertension. Dosages beyond that in a typical multivitamin should be physician directed due to the possible toxic threat. Toxic levels are rare in the United States, but can occur. The level found in most food sources are very safe.

The amounts in Brazil nuts are incredibly high, but do not pose a problem if eaten in amounts considered normal for nuts. The most common source of Selenium toxicity is in areas surrounding mountain coal mining sites. Coal has a high concentration of Selenium.

The soil surrounding the coal also has high levels. The runoff during mining of this surrounding soil and the ash from burned coal have been found in nearby streams and rivers. This affects wildlife and water sources. People may suffer symptoms of toxicity if safe water levels are not maintained or by eating affected plant life, wild life and fish.

The symptoms for toxic Selenium levels are an upset gastrointestinal tract, hair loss, fatigue, irritability, mild nerve damage, white, blotchy nails, and breath with a garlic odor. Symptoms normally occur in five to ten days and could last up to a few weeks once the amount is lowered to a healthy level. Long term toxic levels will damage the circulatory system, nervous system, kidneys and liver. There is not an antidote for selenium poisoning. A simple blood test can be done to verify if Selenium levels are healthy.

Selenium is found in multiple food sources and easily available supplements. It is considered a powerful antioxidant and is known for protecting the body by strengthening the immune system. Studies have shown how it prevents certain diseases and has decreased relapses and deaths in patients. Scientists are continuing to gather evidence supporting their theories on the additional health benefits Selenium has on the human body.